Deification of Jackson as creepy as he was

America has been encouraged to embrace the late Michael Jackson's immense talent and step lightly over the creepiness.

But I can't get past the creepiness -- in the maudlin media coverage, and among those still hustling his body, like his father, Joe Jackson, who used Michael's death to promote a new record label.

How creepy is that? 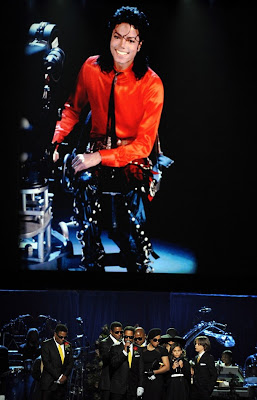 And I don't think I'm alone, especially after Tuesday's creep-fest variety show/memorial service at the Staples Center, with all the weeping and the giant image of Jackson floating over the crowd, arms outstretched, as if on a cross.

What most people are mourning isn't Jackson, but their own youth. Yet it's impossible to weep for lost youth when half your brain is wondering: What the heck ever happened to Bubbles the Chimpanzee?

Jackson's famous pet/friend was found recently, living in a Florida ape rehabilitation center. Jackson would dress Bubbles, now 26, in costume like an admiral, with gold braid and epaulets and serve him green tea and Bubbles would dance. According to news reports, Bubbles is now quite fond of painting and giving piggyback rides to the younger chimps. I figure Bubbles will be undergoing psychiatric counseling for many years to come. Poor Bubbles.

But the other stuff is creepier. The little boys Jackson would sleep with, and the wine or "Jesus juice" he allegedly offered to one child, according to testimony in Jackson's 2005 sexual molestation trial that ended in acquittal. And that $20 million he paid another family after similar allegations.

And the Willy Wonka-style Neverland ranch with the giraffes, the parents clamoring to have their sons sleep over. Jackson didn't prowl schoolyards like Aqualung in a raincoat. The parents brought their children eagerly, desperately.

Rev. Al Sharpton complained about "a disrespectful double standard" in news coverage of Jackson's death and entertainers like Elvis and Frank Sinatra.

"You have had other entertainers that have had issues in their life," Sharpton said the other day, before presiding over Tuesday's memorial variety show. "You [reporters] did not degrade and denigrate them. Michael was no freak, he was a genius."

Perhaps. Elvis got fat on peanut-butter-and-banana sandwiches and died on the toilet. And Sinatra?

He died, too, but not before sleeping with Jill St. John and just about every naturalized blond starlet in Hollywood. The thing is, Frank and Elvis and other superstars like James Brown didn't sleep with little boys.

"What's wrong with sharing love?" Jackson said in 2003. "You don't sleep with your kids? Or some other kids who need love?"

If you don't think that's creepy, then your creep-dar is beyond repair.

Another strange element of the Jackson story is the compulsion by a few who consider themselves intellectuals to cast Jackson as some moonwalking Christlike figure. This was done on the Tavis Smiley show on PBS, and, yes, it's on tape if you don't believe me.

"It's almost like a crucifixion, in terms of the cross you have to bear," said professor Cornel West. "We reap the fruits of the resurrection, in terms of the power that emanates from [Jackson's] sacrifice. He sacrificed his childhood because he loved us so. He didn't just entertain us, he sustained us."

Jackson himself said his childhood was sacrificed on the end of a belt, wielded by his father, in a series of terrible whippings when he was in elementary school.

Not to be outdone, professor Michael Eric Dyson spouted his own mellifluous epistle in an effervescent rush of air:

"There's no question that the transcendent art that he created was a means, an instrument, a vehicle, for others to experience what he did not. His own father told him, teased him that he was ugly, Michael reconstructed his face, deconstructed the African features into a spooky European geography of fleshly possibilities, and yet, what we couldn't deny, was that even as his face got whiter and whiter, his music got blacker and blacker, his soul got more deeply rooted in the existential agony and the profound social grief that black people are heir to. And what he did was he allowed us through his voice and his instrument to see a glimpse of the heaven that he himself was denied."

Believe it or not, that's only an excerpt. They went on like this endlessly, about "existential agony" and the "spooky European geography of fleshly possibilities." Clearly, it is deserving of reflection, perhaps even a dissertation, but I'll leave that to your own commentary.

Yet in their defense, Dyson and West were merely doing what was expected of every actor in this bizarre and creepy requiem.

That's what Jackson's death has become. A performance, something the talented and tortured entertainer would surely understand.

jskass@tribune.com
Posted by jtf at 7:55 PM