There’s nothing cool about Obama. 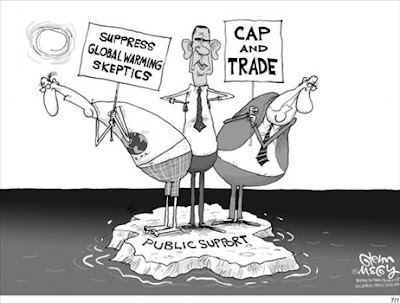 President Obama was supposed to be “cool.” But he isn’t. He’s square. Not just mildly so, but embarrassingly square. He’s squaresville squared. It’s like you’re having a party with your friends and he’s the cringe-making middle-aged parent who wants to show he digs where the young people are at by grooving around in the middle of the dance floor all night long.

How do I know? I’ve been there and I’ve been square. By “there,” I mean I’ve been in places that have tried all the cool Obama dance moves and eventually wised up to what utter clunkers they are.

A week ago, the House of Representatives passed some gargantuan “cap-and-trade” bill designed to “save” “the environment.” Paul Krugman, the Nobel Prize–winning economist, accused those Neanderthals who voted against the bill of committing “treason against the planet.” By that standard, most of the planet is guilty of treason against the planet. I don’t mean just in the sense that China, already the world’s Number One CO2 emitter, and India and other rising economic powers have absolutely no intention of doing what the Democrats have done, no way, no how — because they don’t see why they should stay poor just because New York Times columnists think it’s good for them.

No, I mean that most of the developed world has already gone down the paved road of good intentions and is now frantically trying to pedal up out of it. New Zealand was one of the few western nations to sign on to Kyoto and then attempt to abide by it — until they realized they could only do so by destroying their economy. They introduced a Dem-style cap-and-trade regime — and last year they suspended it. In Australia, the Labor government postponed implementation of its emissions-reduction program until 2011, and the Aussie Senate may scuttle it entirely. The Obama administration has gotten to the climate-change hop just as the glitterball’s stopped whirling and the band’s packing up its instruments.

The Congressional cap-and-trade shtick would be tired even if it weren’t the familiar boondoggle of tax hikes, big-government micro-regulation, and pork-a-palooza pay-offs to preferred clients of the Democratic party. Granted that carbon credits were already a dubious racket equivalent to the sale of “indulgences” in medieval Europe, the decision by Congressional power-brokers to give away credits to well-connected Democratic party interests surely represents the environmental movement’s formal Jumping of the Endangered Great White Shark.

Back at the New York Times, Thomas Friedman agreed the bill “stinks” and says “it’s a mess” and he “detests” it, but nevertheless says we need to pass it because his “gut” tells him to. Maybe his gut’s really telling him the New York Times canteen’s daily specials have been adversely affected by the company’s collapsing share price. Who knows? At any rate, for reasons not entirely obvious from his prose style, the eminent columnist believes himself to have a special influence on the youth of today and so directed the grand finale of his gut’s analysis to them especially: “Attention all young Americans,” he proclaimed. “You want to make a difference? Then get out of Facebook and into somebody’s face. Get a million people on the Washington Mall calling for a price on carbon.”

Perhaps it’ll work. Getting into Thomas Friedman’s face, I see the ruddy bloom of late middle-age has not yet faded from it, so maybe, as his command of the lingo shows, he’s hep to the scene. Maybe the kids’ll abandon their Tweet cred for street cred. Maybe they’ll get outta MySpace and into Sen. Robert C. Byrd’s parking space.

Fossil fuel and cement emissions increased by 3.3 percent per year during 2000-2006, compared to 1.3 percent per year in the 1990s. Similarly, atmospheric C02 concentrations increased by 1.93 parts per million per year during 2000-2006, compared to 1.58 ppm in the 1990s. And yet, despite accelerating emission rates and concentrations, there’s been no net warming in the 21st century, and more accurately, a decline.


The Obama administration is getting into the global-warming beads and kaftan just as everyone else is beginning to toss ‘em into the recycling bin. Same with government automobiles: Been there, drove that — from Eastern Europe to Northern Ireland.

There’s something weirdly parochial about Obama, the supposed “citizen of the world.” A recent piece of mine about “the Europeanization of America” prompted Randall Hoven of The American Thinker to respond that this was unfair . . . to Europeans. He has a point. While the U.S. is going full throttle for Scandinavia-a-go-go, the Continentals have begun to discern to the limits of Europeanization. In 2007, government spending in Europe averaged 46.2 percent of GDP; in America it was 37.4 percent, of which 20 percent was federal. A mere two years later, federal spending is up to 28.5 percent, so, even if state and local spending stand still, we’re at 46 percent:
the European average. But, as Randall Hoven points out, the real story is that we’re at 46 percent and climbing, the Continentals are at 46 percent and heading down. In 1993, government spending averaged 52.2 percent in Europe, and 70.9 percent in Sweden. The Swedes have reduced government spending (as a fraction of GDP) by almost a third in the last 15 years. Their corporate tax rates are lower than ours. And that’s before Obama’s raised them. Last week, the donut chain Tim Hortons, which operates on both sides of the border but is incorporated in the state of Delaware, announced that it was reorganizing itself as a Canadian corporation to take advantage of Canadian tax rates.

“To take advantage of Canadian tax rates”? What kind of cockamamie phrase is that? And who’d have thought any columnist south of the border would ever have cause to type it?

The Europeans have figured out you can be too European for your own good, and are trying to re-acquaint themselves with the real world. But not Obama. Damn the torpedoes! Full speed ahead! Male unemployment has hit ten percent? The stimulus is a bust? It’s stimulating nothing but non-jobs like Executive Stimulus Coordinator for Community Organization Stimulus Assistance Programs? Hey, let’s spend even more, even faster, even less stimulatingly!

President Obama, Nancy Pelosi, Barney Frank, and their chums are spending at a rate that threatens American stability. And, except for the scale and the dollar figure, it’s all been tried before, and it’s all failed before. There’s nothing cool about Obama. He’s a non-stop square dance, swinging us around till we’re dozy and he’s got all the dough. Happy Independence Day.