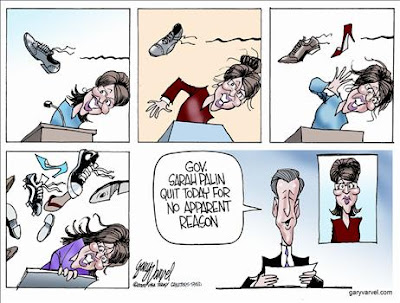 I like Sarah Palin (though I don't know her well). I respect her (though I'm aware of some of her limitations). I wish her well (though I'm not convinced she should be the 2012 Republican presidential nominee).

I am convinced, though, that she should have a chance to compete and make her case. In this, I seem to differ from many of my friends in the mainstream media and the Republican establishment. They tend not only to dislike and disdain Palin, they also want to bury her chances now as a presidential possibility. What are they so scared of?

It's silly to claim Palin has no chance to win the nomination or the presidency. The fact is, despite a rough campaign in 2008, Palin has been (for what it's worth at this stage) a co-front-runner in polls of GOP primary voters for 2012, along with Mitt Romney and Mike Huckabee. In a recent Pew survey, she had the strongest favorable-unfavorable numbers of the likely candidates among Republicans.

She has fervent supporters, which would presumably help her in primaries and caucuses. Among the general public, she has a not-great but not-unmanageable 45-44 favorability rating.

Will her poll numbers fall because she has opted to step down early from the Alaska governorship? Perhaps. But the short-term effect of that decision will soon be swamped by judgments people make as they see her out and about, speaking and opining on the issues of the day.

She'll be able to make the case effectively that she should be the nominee, or she won't.

The odds are that she won't -- just as the odds at this point are against any one of the GOP candidates. It's a wide-open race. And Palin may not even run. But the panic among mainstream media commentators and the GOP establishment suggests real worry that if she does, she might pull off an upset. Why else the vehement assertions that she's clearly made a terrible mistake? Why else the categorical insistence that her political career is finished? Aren't they all protesting too much?

The media establishment didn't protest much about the presidential candidacy of Barack Obama. He gave a good speech at the 2004 Democratic convention, was elected to the Senate that fall, and immediately started running for president. He didn't accomplish much in his four years in the Senate (nor could he have been expected to). But that didn't seem to hurt his standing. Isn't Palin about as well positioned for the 2012 GOP nomination as Obama was in 2005 for the 2008 Democratic one?

I think so -- except that her own party's establishment fears and even loathes Palin, while the Democratic establishment wasn't set against Obama. The hostility of the GOP establishment may be an obstacle to her success. On the other hand, given the performance of GOP operatives and pols over the past few years, maybe their opposition isn't a bad thing.

In any case, this is the same GOP establishment that rallied behind first-term governor George W. Bush in 1997-98 and then propelled him to the nomination in 1999-2000. Had Bush accomplished more than Palin at that point?

Texas has a lot more people than Alaska does, but the Texas governorship is a weaker office -- and some of Bush's first-term initiatives went down in flames, while Palin's have largely succeeded.

It's true that Bush didn't quit as governor and successfully ran for reelection. But why is it more admirable to run for national office while a sitting governor (or senator), spending a fair amount of time out of your state (or away from Congress), necessarily neglecting or delegating some of your duties -- than to turn the office over to your constitutional successor so your constituents have someone working full time on their behalf? Palin will have to endure some fair criticism for abandoning her office before her term ended. But she should also get credit for not using her state office as a means of campaigning for a higher one.

She won't get that credit. For psychological and sociological reasons too deep for me to grasp, a good chunk of elite America hates Sarah Palin and what they've decided she stands for. But if she wears their scorn as a badge of honor, comports herself with good cheer and personal dignity, studies up on national issues and takes the lead in selected debates on behalf of conservative principles against Obama administration policies, she has a shot.

If she's as foolish, erratic and even nutty as her critics claim, then of course she'll fail. If she performs well, she may succeed. If you have an anti-mainstream-media and anti-GOP-establishment bone in your body, it's hard not to root for her at least a bit.

William Kristol, editor of the Weekly Standard, writes a monthly column for The Post.
Posted by jtf at 5:03 PM