SAN FRANCISCO — If anybody is equipped to lead a team back from a two-games-to-none deficit in the World Series, it is Texas Rangers outfielder Josh Hamilton, who has climbed out of a deeper and darker abyss.

Five Octobers ago, Hamilton was out of baseball and on his grandmother’s doorstep, strung out and gaunt. No player has bared more on baseball’s biggest stage than Hamilton, who speaks openly about an addiction to alcohol and drugs that cost him nearly four years of his baseball career and almost destroyed his life.

That type of public exposure Hamilton handles with aplomb. He was much less comfortable the other day when he emerged from his postgame shower at AT&T Park with a butter-colored bath towel wrapped around his midsection and spotted several reporters ringing his locker.

There’s nothing like having to dress in front of cameramen and assorted other strangers, including a few women, to make a guy self-conscious. 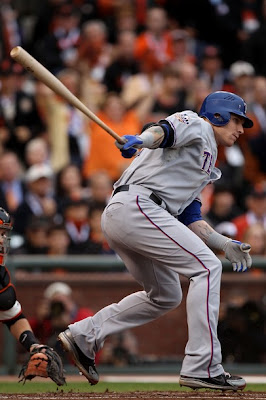 SAN FRANCISCO - OCTOBER 27: Josh Hamilton of the Texas Rangers grounds out in the first inning against the San Francisco Giants in Game One of the 2010 MLB World Series at AT&T Park on October 27, 2010 in San Francisco, California.(Getty Images)

The spotlight’s glare can be blinding to someone on the path to a clean and sober life, but Hamilton, who led the American League this year with a .359 batting average, is determined not to stumble. He has his Bible verses to calm him, one of his favorites being a passage from the Book of James: “Humble yourselves in the sight of the Lord, and he shall lift you up.”

Hamilton’s teammates have done their part, dousing him with ginger ale instead of alcohol during their postseason celebrations. He also leans heavily on his support group, which includes his wife, Katie, and his adviser and confidant, Johnny Narron, a Rangers coach who watched from the periphery as Hamilton conducted his postgame World Series press conferences, then walked out with him to the team bus at the end of each night.

Another mentor is Dwight Gooden, the former Mets pitcher who has waged a public battle with drug addiction. Gooden, a Tampa, Fla., resident, followed Hamilton’s career after he was drafted by the Rays and reached out to him when he heard he was struggling with sobriety.

“I could relate,” Gooden, 45, said by telephone. “When you’re a high draft pick, so much is put on you and the expectations are so high, when you have a downfall, you’re crushed more than anybody. A lot of times you’ll isolate yourself, and when you do that you’re setting yourself up for failure. I didn’t want to see him do that.”

Hamilton said, “I think it’s a good thing to talk to people who know what the temptations are like and the pressures are like to be a pro athlete.”

The Rangers, who are appearing in the first World Series in the franchise’s 50-year history, have not looked like the team that eliminated the Yankees.

“I think maybe we’re saying we’re having fun,” Hamilton said, “but we’re not having fun. We’re tightening up.”

Hamilton, 29, a leading candidate for the American League Most Valuable Player award, has produced one hit in eight World Series at-bats. His timing has been slightly off, but his sense of the absurd is as sharp as ever.

After going 0 for 4 with a walk in the first game, Hamilton laughed about being assaulted in center field by the pungent aroma of marijuana wafting down from the stands.

Asked whether the smell triggered any yearnings or flashbacks, Hamilton said it did not. “That wasn’t my drug of choice,” he said.

From a dependency on cocaine and Crown Royal to the high of being on baseball’s biggest stage, Hamilton’s journey since 2005 has been both remarkable and surreal.

Nolan Ryan, the Rangers president, said: “I don’t think that I can truly appreciate what he’s overcome and the way he’s handled it. To me, it’s a phenomenal story.”

Hamilton, drafted first over all by Tampa Bay in 1999, was well on his way to the majors in 2001 when he was in a car accident during the first month of spring training. He injured his back and was unable to play.

Without the game to anchor his days, Hamilton was adrift. He started abusing drugs and alcohol, and a habit that he said was born of boredom quickly became a compulsion. Eight trips to rehab followed, but Hamilton said he did not begin to turn his life around until he became a devout Christian.

He returned to baseball in 2006, made the Cincinnati Reds’ opening day roster in 2007, moved to Texas via trade for the 2008 season and has been named to the American League All-Star team the past three years. He submits to drug tests three times a week, and except for one drunken episode in Phoenix before spring training in 2009, he appears to have maintained his sobriety.

“I feel very blessed,” Hamilton said. “A lot of people don’t get second chances with drugs and alcohol.”

Anthony Hargrove, a defensive tackle for the reigning Super Bowl champion New Orleans Saints, is another athlete who got a second chance. Hargrove, who was suspended for the 2008 N.F.L. season after failing multiple drug tests, described Hamilton as “a light for those in the dark.”

In an e-mail, Hargrove wrote: “He was my motivation when I was coming back. I had an article of him his first season back and for me he was the person I felt close with even though we didn’t know each other.”

Hamilton keeps his story in play so he can reach as many people as possible. During batting practice before the two games in San Francisco, he signed autographs for people, some of whom shared their tales of addiction and recovery and thanked him for going public with his.

“I talked to a couple of fans who were clean and sober for 14 months,” Hamilton said. “Hats off to them.”

Early in his recovery, Hamilton couldn’t handle the testimonials of others. “I’d hear stories that would trigger things that I didn’t want to be thinking about,” he said. “I’d go sit in the meeting and hear about someone using and I’d leave and want to go use. Once I got that thought in my head, I was obsessed with it until I’d use.”

Now, when his mind gets stuck on a thought, Hamilton recites a passage from Scripture, often provided by Narron. Hamilton’s coping strategies were tested this summer when he sat out most of September with two broken ribs that continue to bother him.

Hamilton said that when he was sidelined with the back injury, “alcohol and drugs were the closest thing I could find to getting that feeling when I was playing the game.”

“That was one reason it was so tough to kick the habit,” he said.

He said it was not difficult for him to stay away from drugs and alcohol this time. When asked why, he pointed at Narron and said: “He’s been a great accountability partner on the road. He’s been a blessing for me.”

Narron, who grew close to Hamilton when they both worked for the Reds, is paid by the Rangers and listed as a special assignment coach. On road trips, he eats most meals with Hamilton and holds on to his cash and major league per diem money. Hamilton never carries more than $40 in his pocket.

Asked about Narron’s salary, Ryan said, “Basically, we look at it as an insurance policy.”

The giant fishbowl that is the World Series would seem to be a huge stressor for a recovering addict, but Hamilton sees it differently. “Being around the game, it’s something that occupies your time,” he said. “It’s good for my recovery.”
Posted by jtf at 6:59 AM