At the grill, time stands still 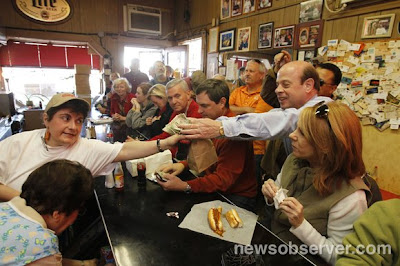 RALEIGH -- After 70 years, the Roast Grill still burns its wieners black, still abides by a strict no-fries, no-chips, no-ketchup policy and still accepts no payment other than cash on the countertop.

Nothing inside this closet-size restaurant suggests the 21st century.

Check the yellowed business cards tacked to the bulletin boards and you'll see numbers for politicians who have either retired or died since they last wiped Roast Grill chili off their ties.

But on its birthday, downtown Raleigh's antique hot-dog joint stands its ground on West Street like a kindly but stern grandpa with garters on his socks.

And just as in 1940, the Roast Grill can draw a line of frank-lovers that stretches down the block, hungry mouths waiting to yell, "Two all the way! Burnt!"

"Grandma told me not to change anything but the prices," said owner George Poniros, wearing a sheriff's hat for the Saturday birthday party. "And never put ketchup in there. We spend too much time making delicious chili for people to ruin it with ketchup."

The Roast Grill began with George and Mary Charles, Greek immigrants who changed the name Chalikis when they hit American soil. "He spoke seven languages," said their son Ernest, uncle to Poniros. "She spoke Greek and a half. All she needed to know was onions, mustard and chili." 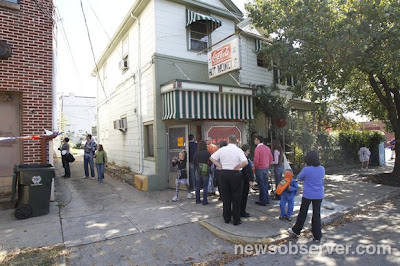 The Great Depression wrecked their fortunes and closed their first restaurant on Martin Street. But in 1939, Mary Charles hit on the idea of converting the front porch of their West Street house into a grill. Her husband died young, and she worked there 53 years until she was just shy of 90.

"She only got robbed one time," said Ernest Charles. "She was working alone, and a man came in and said 'Give me all the money!' I think he had a knife. She told him in her broken English to sit down and have a hot dog. Then she gave him $5 and a hug, and he left."

"They know what I want when I walk in the door," said Don Ledford, a regular eating with his 7-year-old daughter, Grace, and his 5-year-old son, Luke. "I get a fat boy. That's two plain, burnt, on the same bun. My kids like it because they get a free Tootsie Roll."

Seven decades of hot dogs slathered in original-recipe chili will build a wide following. A family friend, Randy Bryant, recalls seeing Bill Cosby there munching a dog under a hat, sneaking in lunch after giving a commencement address.

"The General Assembly, they had three Democrats and two Republicans hammering out the budget in here," Bryant said.

On Saturday, Mayor Charles Meeker sent a proclamation praising the Roast Grill for persisting in an era of "chains and homogeneity," and Gov. Beverly Perdue sent along a similar document thanking the family for lending Raleigh some atmosphere.

But the 70th birthday party drew a few newcomers, too. When one of them ordered a dog with ketchup, the whole line behind him snickered.