Timothy McVeigh Was Not a “Christian Terrorist”

If you want to invite the near universal opprobrium of journalists everywhere in the English-speaking world, just suggest that Barack Obama is, was, or could be considered a Muslim. When the reverend Franklin Graham said on CNN that Obama “was born a Muslim” but had long ago “renounced the prophet Mohammad” and “accepted Jesus Christ,” ink turned to tar and feathers flew.

Boston University professor Stephen Prothero's response was on the polite end of the spectrum. On CNN’s Belief Blog, Prothero accused Graham of waging a “disinformation campaign against both the president of the United States and the religion of Islam” and of violating the ninth commandment by “bear[ing] false witness.” Prothero also compared Graham unfavorably with his famous revivalist father, saying that Franklin was “increasingly sounding like a garden variety political hack, carrying the holy water for the most unholy elements in American society.” 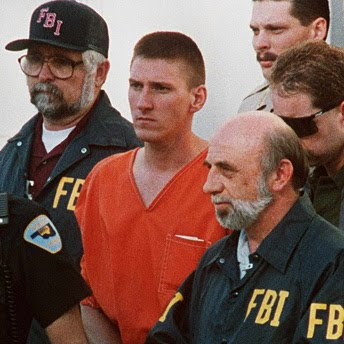 But if it's considered beyond the pale and a smear to both Islam and Obama to call him a Muslim, then why is it acceptable to insist that one of the great monsters of recent American history was a Christian when that is far from clear? I speak, of course, of Timothy McVeigh, the now-executed terrorist who blew up the Alfred P. Murrah Federal Building in Oklahoma City in April 1995. The blast killed 168 people, including 19 children, so you might think that commentators would be somewhat circumspect in linking the Oklahoma City Bomber to people who are not generally inclined to blow things up.

You would be wrong about that. McVeigh has become part of the PC balancing act that analysts are expected to perform every time they are confronted with evidence of Islamist terrorism. Witness the flap over National Public Radio analyst Juan Williams' recent firing because of impolitic remarks he had made about Muslims on FOX News. In his defense, Williams actually cited his casual smearing of Christians as evidence that he was not a bigot.

In an op-ed published in the Daily Caller, Williams explained that he had pointed out to Fox host Bill O'Reilly that we should rein in our feelings and be careful about holding the violent actions of individuals against their respective religions. To illustrate this, Williams had used a shoe's-on-the-other-foot example. Take the Atlanta Olympic bomber “as well as Timothy McVeigh and the people who protest against gay rights at military funerals.” These people, said Williams “are Christians” yet “we journalists” do not typically “identify them by their religion.”

Williams' statement was wrong on several levels. Members of the Westboro Baptist Church -- those ubiquitous, hateful protesters of military funerals -- are irritants, not terrorists. They are few, annoying, and denounced by the vast majority of practicing Christians in the United States. But at least they belong to an actual church and offer its teachings as the reason for their protests. This was not true of McVeigh.

McVeigh was born Catholic but drifted away from the faith. He told Time magazine in 1996 that he believed in a deity but had “lost touch with the religion” of his birth.[1] He did “maintain core beliefs,” but declined in the interview to spell those beliefs out.

He became a little bit more specific before his execution in 2001. We might call him spiritual but not religious. He claimed to be agnostic but not an atheist.[2] McVeigh believed in “science” and not “religion,” he said. (In fact, he said his religion was science.) His murky metaphysical notions included some sort of Deistic creator who set things in motion, not the personal God of Christianity.

The Oklahoma City Bomber didn’t believe in an afterlife and he certainly didn’t believe in hell. When asked what he would do if it turned out he was wrong about that, McVeigh fell back on a martial solution. He told the authors of American Terrorist that he would “improvise, adapt, and overcome,” per his U.S. Army training.

True, McVeigh shocked most observers by receiving last rites from a priest before his execution. What could it hurt, he must have figured. Also true, his final statement was an act of defiance and an anti-confession. He chose the poem “Invictus,” by William Earnest Henley.

The poem includes a nod to “whatever gods may be” for granting the hero “my unconquerable soul.” McVeigh as poetic hero suffers the “bludgeonings of chance” but his head is “bloody, but unbowed” in prayer or supplication. He looks on the “Horror of the shade” and is “unafraid” because however “charged punishments the scroll” may be, there is a higher power: himself. In the end, “I am the master of my fate: I am the captain of my soul.”

These are “sentiments that to a Christian are at least vaguely blasphemous,” wrote columnist Maggie Gallagher, in an earlier attempt to kill the Tim-McVeigh-as-Christian Terrorist meme.[3] But it seems that no amount of evidence will finish it off. The Google autofill function suggested “tim mcveigh christian” as the top choice after I had filled just the first two words. Yet the truth is out there, too. Journalists would be wise to seek it out rather than doing something they find so objectionable when the shoe is on President Obama’s foot.

[3] http://townhall.com/columnists/MaggieGallagher/2002/10/28/timothy_mcveigh,_christian_terrorist
Posted by jtf at 7:57 AM