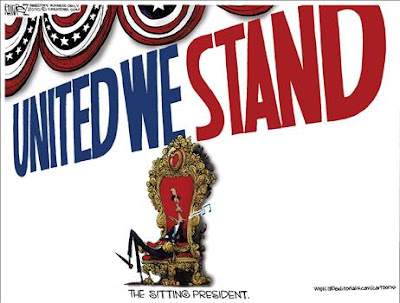 In a radio interview that aired Monday on Univision, President Obama chided Latinos who "sit out the election instead of saying, 'We're gonna punish our enemies and we're gonna reward our friends who stand with us on issues that are important to us.' " Quite a uniter, urging Hispanics to go to the polls to exact political revenge on their enemies - presumably, for example, the near-60 percent of Americans who support the new Arizona immigration law.

This from a president who won't even use "enemies" to describe an Iranian regime that is helping kill U.S. soldiers in Afghanistan. This from a man who rose to prominence thunderously declaring that we were not blue states or red states, not black America or white America or Latino America - but the United States of America.

This is how the great post-partisan, post-racial, New Politics presidency ends - not with a bang, not with a whimper, but with a desperate election-eve plea for ethnic retribution.

Yet press secretary Robert Gibbs's dismay is reserved for Senate Republican leader Mitch McConnell and the "disappointing" negativity of his admission that "the single most important thing we want to achieve is for President Obama to be a one-term president."

McConnell, you see, is supposed to say that he will try very hard to work with the president after the election. But it is blindingly clear that nothing of significance will be enacted. Over the next two years, Republicans will not be able to pass anything of importance to them - such as repealing Obamacare - because of the presidential veto. And the Democrats will be too politically weakened to advance, let alone complete, Obama's broad transformational agenda.

Over the next two years, the real action will be not in Congress but in the bowels of the federal bureaucracy. Democrats will advance their agenda on Obamacare, financial reform and energy by means of administrative regulation, such as carbon-emission limits imposed unilaterally by the Environmental Protection Agency.

But major congressional legislation to complete Obama's social-democratic agenda? Not a chance. That's why McConnell has it right. The direction of the country will be determined in November 2012 when either Obama gets a mandate to finish building his "New Foundation" or the Republicans elect one of their own to repeal it, or what (by then) remains repealable.

Gibbs's disapproving reaction to this obvious political truth is in keeping with the convention that all things partisan or ideological are to be frowned upon as "divisive." This is pious nonsense. What is the point of a two-party democracy if not to present clear, alternative views of the role of government and, more fundamentally, the balance between liberty and equality - the central issue for any democracy?

The beauty of this year's campaign, and the coming one in 2012, is that they actually have a point. Despite the noise, the nonsense, the distractions, the amusements - who will not miss New York's seven-person gubernatorial circus act? - this is a deeply serious campaign about a profoundly serious political question.

Obama, to his credit, did not get elected to do midnight basketball or school uniforms. No Bill Clinton he. Obama thinks large. He wants to be a consequential president on the order of Ronald Reagan. His forthright attempt to undo the Reagan revolution with a burst of expansive liberal governance is the theme animating this entire election.

Democratic apologists would prefer to pretend otherwise - that it's all about the economy and the electorate's anger over its parlous condition. Nice try. The most recent CBS/New York Times poll shows that only one in 12 Americans blames the economy on Obama, and seven in 10 think the downturn is temporary. And yet, the Democratic Party is falling apart. Democrats are four points behind among women, a constituency Democrats had owned for decades; a staggering 20 points behind among independents (a 28-point swing since 2008); and 20 points behind among college graduates, giving lie to the ubiquitous liberal conceit that the Republican surge is the revenge of lumpen know-nothings.

On Nov. 2, a punishing there will surely be. But not quite the kind Obama is encouraging.

My prediction: The Dems lose 60 House seats, eight in the Senate. Rangers in seven.

letters@charleskrauthammer.com
Posted by jtf at 6:54 AM