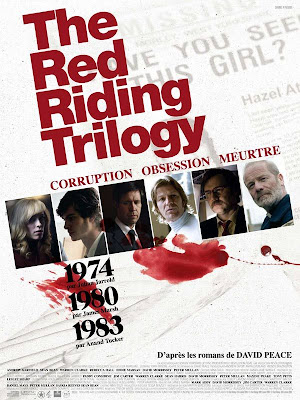 “This is the North—we do what we want.” These defiantly jocular words are spoken by a policeman as he throws a young reporter out the back of a van. The scene takes place in “Red Riding: 1974,” the first in a series of films, “The Red Riding Trilogy,” made last year for British television’s Channel 4, and now released in theatres as a mammoth, sensationally violent and beautiful five-hour movie. (The trilogy is also available on cable, as a video on demand under the rubric “IFC in Theaters.”) The North in the policeman’s boast is West Yorkshire—the city of Leeds, mostly, but also featureless pale-green moors and, among them, small, rubbly towns with dead-looking brown houses. “The Red Riding Trilogy” is based on a quartet of books (one was dropped for the TV adaptation) written by the British noir specialist David Peace, who, starting in 1999, fictionalized some of England’s most notorious recent crimes. Elements of the following find their way into the movie: the “Moors murders,” of five children, between July, 1963, and October, 1965; the murder of thirteen women by Peter William Sutcliffe, known as the Yorkshire Ripper, between 1975 and 1980; and a miscarriage of justice that saw Stefan Kiszko, a twenty-six-year-old tax clerk from Rochdale, serve sixteen years for a 1975 murder that he did not commit. Believe it or not, the series is an entertainment.

Most of the trilogy is about the wavering attempts to get at the truth of botched police investigations—ineptitudes that the novels and the movie turn into an interlocking system of corruption. You don’t see any of the murders, but there are shadows of death everywhere: pale corpses, brutality and cynicism, and hints of perversion and obsession—a sense of violation fouling the terrain. One writer, Tony Grisoni, did the adaptation, but each film has a different director and a different look. A few scenes in each episode—the repeated use of swans’ wings as a portent, some fancy camerawork—border on the pretentious, but the dark power and the flowing organization of the material pull you into the narrative, which moves forward and backward in a single skein of visionary filmmaking. Forgoing digital effects, or any presence of the supernatural, “The Red Riding Trilogy” nevertheless achieves a terrific sense of the uncanny, an atmosphere so spooked and suggestive that it becomes oddly attractive, like an enchanted forest in a children’s story. Flowers of evil are growing in the stony Yorkshire soil.

Grisoni retained Peace’s noir fatalism, his colloquial, bitter pungency—the gibes and roughhousing of male camaraderie and rivalry—and he filled out the social background. Pummelled by the repeated crimes, the population seems as cursed as the landscape, which has been stripped of its famous beauty. Many of the women are frightened or grieving, many of the men vaguely or openly guilty, even those who haven’t done anything, whose only crime is being fallible or knowing things that trouble them. As in any mystery, we’re eager for the truth, and “Red Riding” finally delivers: inexplicable acts and cryptic conversations, baffling at first, are recapitulated, interpreted, and resolved; characters who hover meekly in the background of the first film grow in importance later in the series, sometimes by means of flashback or moments from the past opened up and made clear. For Peace and Grisoni, the primal sin, which sets in motion the years of nasty behavior, is greed. In the first film, the fictional top inspectors of the West Yorkshire police have been bought by a powerful real-estate developer, John Dawson (Sean Bean), who is himself criminal in his appetites. As the series goes on, the police commit crimes to cover their relationship with Dawson, and then more crimes to cover the earlier ones. The series suggests that, when the Ripper was still at large, the police imitated his gruesome method of killing so that their acts would be taken as his. In other words, the serial crimes of the insane create a kind of protective shell for the rational crimes of the merely greedy, a deeply unsettling idea.

A few hard-pressed idealists try to clear out the spreading rot. In the first film, the cocky reporter Eddie Dunford (Andrew Garfield), a tall, good-looking young man with sideburns and warm brown eyes, takes on this dirty world. Little girls are being murdered, and, as far as Dunford can see, the police are too compromised to catch anyone. He braves the rancid atmosphere around police headquarters and also at his newspaper, the Yorkshire Post, whose editor colludes with Dawson. Careless and randy, Dunford has an affair with Paula Garland (Rebecca Hall), who has lost her young daughter to the killer. But Garland has also been bought off by Dawson (she’s his mistress), and the wonderful Hall makes her soulfully masochistic—an intelligent but lost woman trapped in a life gone wrong. Garland wants to be saved, but Dunford, a likably ambitious and libidinous descendant of Sam Spade and Philip Marlowe, is too reckless to be effective. He gets laid a lot, but also beaten up a lot; he lacks the instincts of a survivor. The director, Julian Jarrold (“Becoming Jane”), tells the story entirely from Dunford’s point of view; we’re close to his pleasures and risks, which is both satisfying and unnerving. And Jarrold, I would guess, has taken a good look at David Lynch’s work. He has a taste for lowering gray skies and dark roads barely penetrated by sparse headlights. His hero falls into trances, as if the truth could be found in his unconscious. 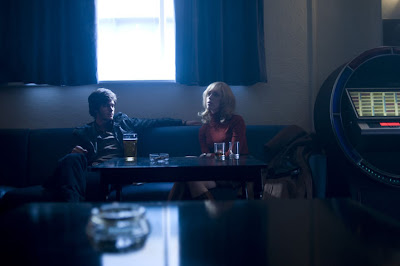 Andrew Garfield and Rebecca Hall as a reporter and the mother of a missing child.

In the second film, “Red Riding: 1980,” the Ripper is rampaging all over Leeds, and the Home Office sends an inspector from Manchester to find the killer and clean up the mess in the police department. Peter Hunter (Paddy Considine) is a more experienced and disciplined figure than Eddie Dunford, and the director of this episode, James Marsh (“Man on Wire”), in keeping with Hunter’s cool, has a more settled and purposefully matter-of-fact style. We’re more firmly anchored in reality this time: the episode begins with documentary footage from the Ripper years. Caught at last, the Ripper, played with bizarre calm by Joseph Mawle, describes one of his killings to the assembled West Yorkshire police. Everyone listens with a kind of horrified awe; the police may be stunned, in part, because they can no longer hide their own crimes behind the Ripper’s. Still, even with the Ripper out of commission, the curse on the North isn’t lifted. Hunter has already been stymied in his attempt to wipe out corruption. Again and again, he runs into the obscurantist rancor of a crooked officer named Bob Craven, played by the eerily intense Sean Harris, who literally goes nose to nose with Paddy Considine’s Hunter, pushing him back physically with his face. Frozen out, discredited, and dealing with problems of his own, Hunter begins to fall apart. The light for a number of scenes is an eerie white, as if we had entered a twilight zone where certainty fails.

In the final episode, “Red Riding: 1983,” directed by Anand Tucker (“Hilary and Jackie”), the random forces of goodness at last assemble their feeble powers. Another girl disappears, and the crime, which has obvious similarities to the disappearances and the deaths of a decade earlier, sickens one of the police higher-ups, a solemnly imposing man, Maurice Jobson (David Morrissey), who has been in on the fix all along. Jobson, mumbling and tentative, undergoes a gradual awakening, the first sign of police effectiveness. He is joined in the fight for clarity by a shabby lawyer, John Piggott (Mark Addy), a stout and morose failure who is stricken by his own family connection to the Yorkshire violence. The two men have another partner whom neither is aware of. Years earlier, there was a secondary sin: a young boy was turned into a prostitute by a local man whom we see throughout the series. The hustler, B.J. (Robert Sheehan), who witnessed some of the crimes, also floats in and out of all three episodes, a softly lyrical insinuation, too scared to tell more than a little of what he knows. It is B.J., professionally a criminal but morally an innocent, who narrates the surprise conclusion in which, after much misery, a seeming resurrection takes place. The stray bits of white light seen in parts two and three are gathered into a powerful shaft, and the cycle of murder and corruption is brought to a close.

David Peace has written that “crime is brutal, harrowing and devastating for everyone involved,” and this certainly comes through in the adaptation. But a high degree of art and show-business savvy has been applied to the unspeakable. The expressiveness of even the minor actors, for instance, warms the bleak atmosphere. “The Red Riding Trilogy” is an exhausting, morbidly fascinating, and finally thrilling experience. The hardiest viewers may want to brave the five-hour marathon in the theatres, but most people, I believe, would be happier seeing it one episode at a time, savoring its complex turns, its perversities and occasional beauties, over a number of sweetly troubled days. ♦
Posted by jtf at 6:02 AM