Home Runs and Demons for Hamilton and Mantle 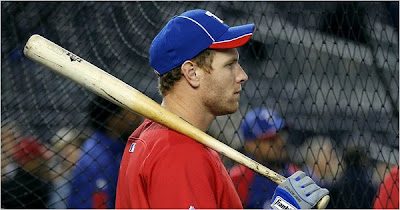 Josh Hamilton had four homers in the championship series against the Yankees and was named the most valuable player.

Josh Hamilton keeps moving up in stature — day by day, as he reminds himself. His career, his life, is all so fragile. But right now Hamilton is being compared to some terrific players of the recent past.

Still discovering himself at 29, Hamilton reminds me of a switch-hitting superstar center fielder from an earlier age, one who is back in the spotlight these days. He reminds me of Mickey Mantle, not, I would like to think, because of some subliminal fascination with white superstars, but because Mantle’s tortured life and Hamilton’s imperiled life strike me as very close to each other.

As the Rangers won their first pennant Friday night, I could not help thinking of Mantle, who settled in Dallas and died there in 1995, and is the subject of a revealing biography, “The Last Boy: Mickey Mantle and the End of America’s Childhood,” by Jane Leavy, recently published by HarperCollins.

Mantle escaped the multiple poverties of mined-out Oklahoma — worse than imagined — and brought his demons to New York in 1951. He never got any real help until he was dying.

Hamilton, who came from Raleigh, N.C., washed out of the Tampa Bay organization, revived in Cincinnati, and found himself with the Rangers in 2008. He nearly let his raging weaknesses take him all the way down, but he saves his life every day with a ritual of his Christian faith and his family and his work, no small thing when a man is one grandiose impulse from destruction.

That Hamilton became the most valuable player in the Rangers’ American League Championship Series victory against the Yankees is a tribute to him, but also to the forces he allowed into his life. He came along in an age not only of vast salaries and crack cocaine and steroids and electronic blather but also in a time when addiction treatment has been integrated into organized sport.

Religion has always been around the clubhouse, but now it was intertwined with the techniques of rehabilitation, for those who wanted it. The Tampa Bay organization and Major League Baseball, to their credit, kept sending Hamilton to programs until it took, day by day. 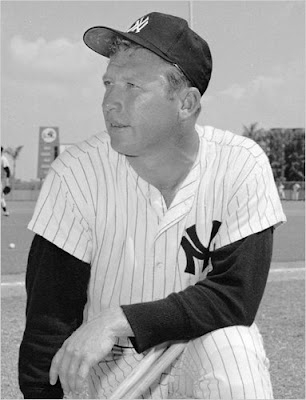 Powerless Mickey Mantle was allowed to pursue the traditional vices — alcohol, promiscuity — by the code of the time. As Leavy has documented in her knowing and kind biography, people knew Mantle was tormented, that his appetites were out of control, but just about everybody needed something from him, whether it was home runs or the glow of his smile on good days or affirmation of a juvenile America.

Leavy diligently found hundreds of friends and teammates and family members who described Mantle’s childhood of no kindness, no affection, no confidence. It is part of his mythology that his father, Mutt Mantle, willed him to be a ballplayer, but all along it has only been vaguely sensed how full of anger and fear the son was.

He wet his bed until his mid-teens, shortly before he went off to the Yankees. Mantle’s wife, Merlyn, had disclosed that Mantle had been sexually abused by a female relative when he was young, and Leavy learned more from her and relatives. Did Mantle’s history explain his sexual compulsions, from voyeurism to exhibitionism? (As a young reporter, I saw Mantle ostentatiously display scratch marks on his nude body to teammates, who mostly cheered his escapades.)

Perhaps Josh Hamilton knows why he took to crack while he was one of baseball’s most promising players. But at least he has been handed the ammunition to stave off the desires. Mickey Mantle, that great charismatic hero, carried the stigma of coming from a poor, uneducated corner of industrial America. His drinkin’ buddy Billy Martin (with friends like this) compared Merlyn Mantle to the discarded mineral waste of Oklahoma, known as chat. Martin was the epitome of bad company but Mantle knew he had himself to blame.

In that age, nobody could help him. Casey Stengel, who drank a bit himself, despaired of getting Mantle to learn from him. Suppose Mantle had signed with his boyhood favorites, the Cardinals, and played for a fatherly manager like Eddie Dyer or Johnny Keane, alongside his temperate hero, Stan Musial, instead of being scolded by Stengel and ignored by Joe DiMaggio and indulged by the open city of New York? We will never know.

The Mantle biography (disclosure: Leavy is a friend; we sometimes chatted about Mantle) describes how Mantle achieved sobriety and some spiritual peace through a preacher and the loyal teammate Bobby Richardson. But he carried a hangdog sense of shame and sadness through his final public months.

By contrast, Hamilton is able to witness the power that worked for him. After being spared the ritual dousing of Champagne (is this binge necessary?) during Friday’s celebration, Hamilton shrugged off the suggestion that he has reached a peak.

“Well, it’s not the top of the mountain until I get to stand in front of my savior one day,” he said.

His form of faith might not work for everybody, but Josh Hamilton received help in the course of his playing career. Mickey Mantle never did.