All Quiet on the Black-Ops Front


I’d like to ask a simple question: Why isn’t Julian Assange dead?

In case you didn’t know, Assange is the Australian computer programmer behind WikiLeaks, a massive — and massively successful — effort to disclose secret or classified information. In a series of recent dumps, he unveiled thousands upon thousands of classified documents from the wars in Afghanistan and Iraq. Military and other government officials insist that WikiLeaks is doing serious damage to American national security and is going to get people killed, including brave Iraqis and Afghans who’ve risked their lives and the lives of their families to help us.

Even Assange agrees. He told the New Yorker earlier this year that he fully understands innocent people might die as a result of the “collateral damage” of his work and that WikiLeaks may have “blood on our hands.” WikiLeaks is easily among the most significant and well-publicized breaches of American national security since the Rosenbergs gave the Soviets the bomb.

So again, I ask: Why wasn’t Assange garroted in his hotel room years ago? 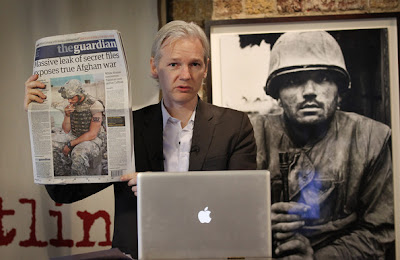 Julian Assange of the WikiLeaks website holds up a copy of The Guardian newspaper as he speaks to reporters in front of a Don McCullin Vietnam war photograph at The Front Line Club on July 26, 2010 in London, England. The WikiLeaks website has published 90,000 secret US Military records. (Getty Images)

In almost every corner of the popular culture, there are people who assume incredible competence on the part of our intelligence agencies. We take it as a given that spooks can, in the immortal words of Elvis, take care of business in a flash. In the Jason Bourne movies, say the wrong word into your cell phone, and assassins will find you at the train station in minutes. In AMC’s Rubicon, if you pay too close attention to crossword puzzles, your train will be “accidentally” derailed. In Three Days of the Condor, if you ask your bosses the wrong question, a postman with an ice-bullet-shooting machine gun will pay you a visit.

Of course, that’s just Hollywood. But if you read left-wing accounts of the intelligence community, two versions dominate. The CIA and similar outfits are either evil and incompetent, or evil and super-competent. Sometimes the folks at The Nation will mock the CIA for trying to blow up Castro with an exploding cigar. Other times some Oliver Stone type will insist that the military, or the CIA, or the NSA, or rogue elements from those quarters, managed to assassinate JFK and pin it on a Marxist dupe named Lee Harvey Oswald.

Under either scenario, you’d think Assange, super-whistle-blower of the international Left, would be a greasy stain on the autobahn already.

Meanwhile, conservatives have something like a mirror-image view of the black-ops crowd. We tend to think they’re either well-intentioned bunglers or noble ninjas in London fog trench coats. Again, either way, Assange’s shrimp-on-the-barbie should have had Strontium-90 in it years before anyone heard his name.

Oh, and it’s not just nation-states that are threatened by WikiLeaks. These guys spend much of their time going after big corporations that, we’re often told — at least by Hollywood and the people who e-mail me in ALL CAPS — routinely rub out gadflies and whistle-blowers who try to let the world know the electric car was perfected in 1920, or that milk companies are making millions by poisoning their customers (that was the actual plot of I Love Trouble, by the way).

Now, I know there are many solid answers to my question. For starters, the world isn’t nearly so dramatic as novelists, bloggers, self-important journalists, and nostalgic former spies often claim it is. The main evidence that the U.S. government didn’t bring down the World Trade Center on 9/11 is that no one has the ability to pull off a conspiracy like that. And the people who come closest — i.e., those very same spies — are too decent and patriotic even to imagine trying.

Indeed, most of the documents from WikiLeaks debunk the vast majority of conspiracy theories that fueled so much idiocy on the left for the last decade. No sinister plots involving Halliburton or Israel have been exposed — because they only existed in the fevered fantasies of some coffee-shop dissidents.

Second, Assange is essentially hiding behind his celebrity and the fact that it wouldn’t do any good to kill him, given the nature of the Web. Even if the CIA wanted to take him out, they couldn’t without massive controversy.

That’s because assassinating a hipster Australian Web guru as opposed to a Muslim terrorist is the kind of controversy no official dares invite.

That’s fine. And it’s the law. Ultimately, I don’t expect the U.S. government to kill Assange, but I do expect them to try to stop him. Alas, as of now, the plan seems to be to do nothing at all.

— Jonah Goldberg is editor-at-large of National Review Online and a visiting fellow at the American Enterprise Institute. © 2010 Tribune Media Services, Inc.
Posted by jtf at 7:10 AM