Writing about the career of Josh Hamilton has been joyous and sad. From baseball phenom derailed by substance abuse to major league star and playoff MVP, his life has been filled with moments of candor and deception. 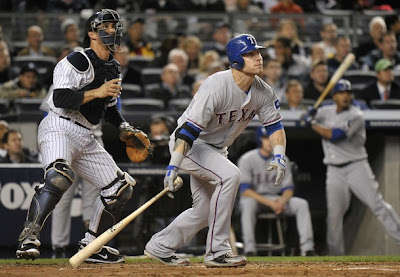 Some of the moments I remember best:

Sitting on the lawn mower: During a break in mowing his parents' lawn in the summer of 1998, Hamilton talked about his goals before his senior year at Athens Drive High School. He said he wanted to become the best baseball player that he could be. His summer was filled with games, practices, showcases and trips. He said he had been to Walt Disney World to play baseball several times but had never set foot in a theme park.

His room: Josh's room was the haven of a baseball fan. There were home run balls, newspaper articles, posters, bats, cleats and baseball cards. His room seemed to be a place to dream.

The home run: Athens Drive was playing at Garner in a tournament when Hamilton launched an incredible home run. It never seemed to rise more than 10 feet off the ground and disappeared from the park instantly. The ball could be heard ricocheting through the trees in right field.

Big Ash: Hamilton befriended Ashley Pittman, a special-needs student who helped with baseball. Hamilton often ate lunch with Pittman. When Ashley was upset after an Athens Drive loss, Hamilton hugged him and sat with him on the bus. "Hambone," Ashley would say. "Big Ash," Hamilton would reply. 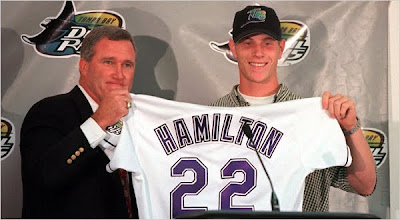 1999 MLB draft day: The family had set up tents in the yard for the media. His father Tony paced. Eventually, Josh came to the door and said he had been drafted. When asked, he said he had been taken No. 1 by Tampa Bay. He signed quickly, saying he was more interested in playing than holding out for more money.

Autographs in Greensboro: Hamilton was playing for Princeton, W.Va., when he came for a series in Greensboro. A couple of folding chairs were set up on the field for interviews. He laughed and talked about his love for baseball. A couple of teammates marveled at his talent and also about how accommodating he was signing autographs for fans. Years before, he had been denied an autograph by a major leaguer. He had not forgotten how much that hurt.

The wreck: The Hamiltons, Josh, Tony and mom Linda, were in a horrific traffic accident near Tampa, Fla., in 2001. Josh Hamilton's injuries knocked him out of baseball for a while. Looking back, it was the beginning of Hamilton's off-the-field problems.

Time and trouble: Without baseball, Hamilton had time on his hands. He later said he drank his first alcohol and used his first cocaine in a period of a few hours. He candidly told the club psychologist that he was experimenting with drugs and was sent immediately on the first of a series of rehab trips.

Tattoos: Hamilton came to lunch at a fried chicken place driving a car with his initials stenciled on the side. The sports car wasn't the only thing monogrammed. His arms and legs were covered in tattoos. Asked if they were temporary, he said he wouldn't have a tattoo unless it was permanent. He said, other than the tattoos, that he was the same guy he had always been. That wasn't true. He had already denied he had any substance abuse problems several times. 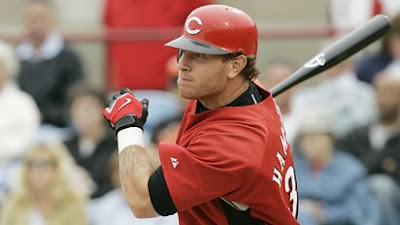 Fighting back: After nearly hitting bottom, Hamilton began a comeback. He married Katie Chadwick in 2004, and they had a child. He invited me to his home and unveiled every secret, all the details of his battle with addiction. He played catch in the backyard with his daughter. He was trying to get back in baseball. Katie, who had never seen him play, said she wanted Josh to be a good father and husband. But amid all the hope for the future was Hamilton's haunting statement that he often wanted to stop for a beer when he drove past a local convenience store, even though he knew one drink could ruin his life.

Rock bottom: Hamilton was charged with assault after drinking. As revealed in his book, "Beyond Belief," he descended deeper into drug and alcohol addiction.

Recovery: Somehow, and it could not have been easy, he broke his drug habit and was able to return to baseball. He played a few games in Hudson Valley, N.Y. Katie was amazed to see how good her husband was at baseball.

A second chance: Hamilton was cutting lumber when he learned the Cincinnati Reds had traded with the Cubs to obtain him after the Rule 5 draft in 2006. It meant a chance to make it to the major leagues.

All-Star Game: Hamilton put on a memorable home run-hitting demonstration during the 2008 All-Star Game. He brought in local youth coach Clay Council to pitch for him. Years before, Hamilton told me that he wanted to tell people about his faith if he ever had a national platform. He did. He didn't win the All-Star home run contest, but he said he had accomplished his bigger goal, which was telling people about his faith. 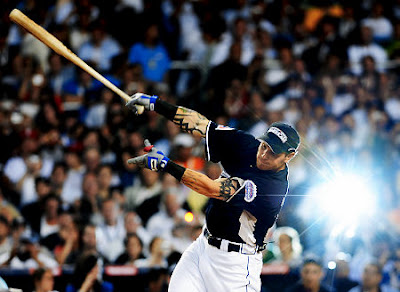 Giving back: Hamilton raised a lot of money for charity two years ago. He auctioned his All-Star jersey, saying he had his memories and that he didn't need a shirt. He gave away thousands of dollars in support of an orphanage. Katie said that Josh knew money couldn't buy his happiness. He had been a multimillionaire when he was in his early 20s, and he had been miserable.

The MVP: Watching Hamilton play with the Texas Rangers in the American League Championship Series was remarkable. He is bigger and stronger, but the curly hair looks the same and so does the grin that comes naturally. The joy that he has always shown playing baseball glows from him. He led the American League in batting. He was the ALCS most valuable player and begins his first World Series on Wednesday night against the San Francisco Giants.
Posted by jtf at 8:48 AM