Introducing the old Josh: a local star steps to the plate 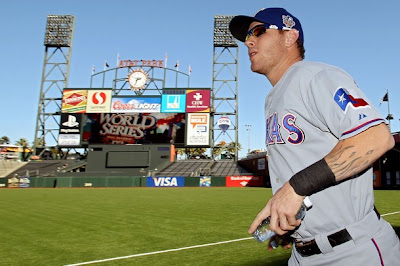 SAN FRANCISCO - OCTOBER 26: Josh Hamilton walks on the field prior to a workout session at AT&T Park on October 26, 2010 in San Francisco, California. The Texas Rangers will face off against the San Francisco Giants in Game One of the 2010 MLB World Series on October 27. (Getty Images)

RALEIGH -- When No. 32 steps to the plate tonight in size 19 cleats, a World Series crowd rumbling in his ears, a thousand eyes in Raleigh will see the polite kid from Athens Drive High School - the star who said "Yes, sir" and "No, ma'am," the slugger with eye-popping power.

They'll recall a hitter so natural he took swings with the varsity squad as a seventh-grader, the pitcher who threw so hard catchers padded their mitts with tape, and the kid who knew he was bound for the majors by age 14, yet never bragged or swaggered.

But mostly, when they tune in tonight, fans in Hamilton's hometown will cheer for second chances. They'll wait for Josh Hamilton the champion to finally stamp out Josh Hamilton the drug-addicted, tattoo-covered mess who nearly drove his career off a cliff - a man who once pawned his wife's wedding ring to buy cocaine.

They'll hope the world gets to see the Josh Hamilton they knew.

"There's going to be some high TV ratings in North Carolina, that's for sure," said Clay Council, a coach who once tossed him batting practice. "Everyone has some kind of association with Josh Hamilton. 'Oh, I went to the same church he did,' or 'Oh, I knew his grandma, who worked with my mother.' Everybody associated with Josh Hamilton is big time."

The Hamilton who Raleigh remembers batted .629 as an Athens Drive junior and could throw a 96-mph fastball. By the time he was a sophomore, Coach Stan Mozingo wouldn't play catch with him anymore. His throws had a second gear. Mozingo witnessed two superhuman moments: the double off a curve ball that bounced to the plate and six shutout innings Hamilton pitched in the playoffs, his first outing on the mound after a season-long arm injury.

"His dad said, 'Josh can only throw 50 pitches,'" Mozingo recalled. "Josh kept coming back between innings asking, 'How many was that?' He shut them out on 50 pitches. That was the most unbelievable pitching effort I've ever seen."

But even when he was a senior with the class of '99, days away from being named Major League Baseball's No. 1 draft pick and handed millions of dollars, he kept the grounded outlook of an Athens Drive Jaguar.

"People would come and bring him baseballs to sign," said Shari Frederick, Hamilton's math teacher. "I would turn them away. Once he was in my room, he was Josh the math student. He was not Josh the baseball player, and he was cool with that."

Maybe the most avid fan tuning in tonight will be Ashley Pittman, one-time manager of the Athens Drive team.

The story most often told about Hamilton's friendship with Pittman, who has Down syndrome, was the time the star hitter ran all the way to the team bus to console his friend, who was alone and crying about a team loss.

By the time Ashley's family reached the bus, Hamilton had perked him back up with some can't-win-them-all wisdom.

"Every time Josh hits a home run, he's hollering and yelling and texting his friends. Josh is a good person. He's just gone through some of the valleys we all go through. With him being in the limelight, you're just going to notice more."

Hamilton left Raleigh looking too good to fail. He came back a few years later asking his father for $2,000 to pay a drug debt. Starting tonight, he gets his chance to be The Natural everybody always called him - to be the kid from Athens Drive, at bat in the world's biggest show.