It looks like Brooklyn District Attorney Charles Hynes is on track to win another endorsement from ACORN!

This week, Hynes announced that "no criminality has been found" after his investigation of the videotapes made by investigative journalists James O'Keefe and Hannah Giles, which show ACORN employees counseling the pair on getting a mortgage for a house of prostitution. 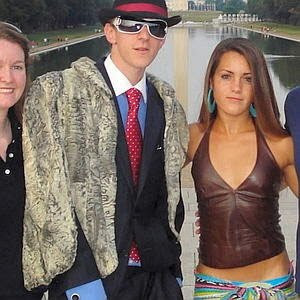 James O'Keefe and Hannah Giles posed as a pimp and prostitute to solicit financial advice from ACORN.

I'm just glad to know that Hynes conducted a thorough "investigation" first. Who did he have screen the videotapes, Gov. Paterson?

If his investigators had actually watched the videotapes, they would have found ACORN employees apparently advising a pimp and prostitute on how to defraud mortgage lenders, deposit prostitution money in a bank, hide money from the government and avoid detection while running a whorehouse with teenage girls from El Salvador.

I'm not a lawyer -- oh, wait, yes, I am -- but I count approximately a half-dozen state law crimes being discussed on those tapes, from money laundering to advancing prostitution.

In a "Eureka" moment, ACORN Employee-of-the-Month Volda Albert identifies for O'Keefe and Giles the problem they had been having getting a mortgage:

Albert: Um, is it legalized? Is prostitution legalized in New York state?

O'Keefe: It's not. It's not, unfortunately.

As ACORN employee Milagros Rivera said, "You can't say what you do for a living because of the law." But displaying ACORN's can-do attitude, she explained: "Honest is not going to get you a house."

Under New York law, hiding the true source of down payment money from a lender constitutes mortgage fraud. Also, using the proceeds of criminal conduct in any banking transaction is money laundering.

Does anybody need a flow chart at this point, or should I continue?

To help Giles hide her income from turning tricks, ACORN employee Albert advised Giles to open two banking accounts, depositing no more than $500 per week in each one. (This would not only enable her to conceal her illegal earnings, it would also qualify her for free checking.)

But Albert's most inspired idea was that Giles get a "house with a backyard. You get a tin can ... and bury (your money) down in there, and you put the money right in, and you put grass over it, and you don't tell a single soul but yourself where it is."

Back when I was in Louisiana, we advised people to put their illegal money in the freezer, but that didn't work out so well. And I guess putting your money in a mattress isn't advisable if you live in a whorehouse.

Anyway, Albert was particularly detailed on the tin-can-in-the-backyard investment plan: "Keep thinking: 'I have a yard. I have a house.' You gotta start coming out with, like, plants and you start doing -- so it won't be suspicious. You start buying plants for the backyard in pots and what have you, and you mark a spot."

She later told Giles: "You are not paying Social Security, so you'll have society, all right? You are not getting a pension, so you need to save that money for in later years." ACORN: Helping Plan Your Financial Future.

If only shady lawyers advised clients to bury money in cans in their backyards, instead of putting it in tax shelters, we wouldn't have all those attorneys clogging up prison cells!

The ACORN employees also stressed that Giles should do nothing to attract attention to her prostitution money. Albert said: "You can buy a decent car for yourself, no big fancy thing to attract people, all right?"

In Albert's defense, this could have been common etiquette advice. No one likes a showy hooker.

Even after Giles explained her plan to house a "slew" of 13-, 14- and 15-year-old girls from El Salvador for her prostitution business, Rivera simply responded: "So you guys ready to schedule that (mortgage application) for the summer?"

Under New York law, a person is guilty of advancing prostitution if he: "knowingly ... aids a person to commit or engage in prostitution (or) ... engages in any other conduct designed to institute, aid or facilitate an act or enterprise of prostitution."

If none of the advice given by ACORN on those videotapes constitutes conspiracy or aiding or abetting a crime, see this column next week for my opus: "10 Detailed Plans to Kill George Soros and Why This Might Be Right for You."