To listen to the silence on the other end of the telephone, you would have thought I asked Craig Patrick to pick the favorite of his four kids and four grandchildren. 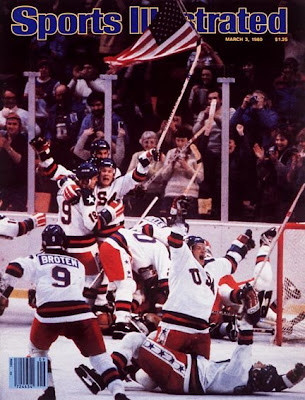 "Would you rather have that miraculous Olympics hockey gold medal from 1980 or the two Stanley Cups with the Penguins in '91 and '92?"

"You can't pick between the two," Patrick finally said.

Who would want to?

"All I know is I've been a very lucky man," Patrick said.

No, it hasn't been a perfect career ride. The Penguins didn't renew Patrick's contract in 2006 after the franchise took a long, hard fall from those glory days of the early '90s. He hasn't been able to find work in the sport since. "I keep looking every day," he said. "I'm a young 63. I can make a difference someplace."

Patrick is a great hockey man, a Hall of Famer. At the very least, any organization should want him on its payroll so his eyes can evaluate its players and the competition's. But if it doesn't work out again for Patrick, he hardly can complain. There are those two Cup teams he built after inheriting Mario Lemieux. There is his sizable role in the Penguins' Cup win last summer. "Our staff did an absolutely wonderful job in helping to put that team together," he said of drafting Marc-Andre Fleury, Evgeni Malkin and Sidney Crosby, among others. And, of course, there's his role as coach Herb Brooks' top assistant on that '80 U.S. team that beat the powerful, hated Russians and went on to win the gold medal by beating Finland.

It's a big deal because Team USA's gold at the Lake Placid, N.Y., Games is widely considered the greatest sports moment of the 20th Century. It seems like an especially big deal today because they will pass out another hockey gold medal today at the Vancouver Olympics. And, let's face it, we just love to celebrate the anniversaries of our feel-good sports moments.

That '80 team of young amateurs and college kids provided the best one of all time.

"I've believed in miracles ever since," Patrick said.

Patrick, who lives in Fox Chapel, played a huge role despite being Brooks' second choice for the job behind a man Brooks never identified to him. The two had been tight since they played on the U.S. national team in 1970.

Brooks' brilliant plan -- remember, he was a psychology major at the University of Minnesota -- was to bring the Team USA players together by getting them to, quoting Patrick, "universally dislike him." He drove them relentlessly during the seven months leading up to the Olympics. Patrick was there to be their friend, a soft shoulder to lean on in their toughest, most frustrating moments.

"I had heard of good-cop, bad-cop in situations with suspects, but not with a hockey team," Patrick said. "But Herb was a brilliant man. He had the whole thing planned out a year in advance. He knew what players he wanted. He knew what approach he had to take. He knew what he had to teach them.

"That was the most prepared team of my lifetime."

Still, Patrick acknowledged, the gold medal didn't seem realistic. The Russians had beaten the Americans, 10-3, in an exhibition game at Madison Square Garden only days before the Olympics. A year earlier, they had beaten an NHL All-Star team, 6-0. A year later, they would beat a Canadian team led by Wayne Gretzky and loaded with future Hall of Famers, 8-1, to win the Canada Cup.

What chance did those American kids have?

Do you believe in miracles? Yes!

There never has been a bigger upset than Team USA's 4-3 victory. There never has been a more meaningful sporting event. That was a troubled time for America, coming off a decade with a frustrating ending to the Vietnam War and the Watergate fiasco. Fifty-two Americans were held hostage in Iran. The Soviets had just invaded Afghanistan. The Cold War was raging.

Brooks' hockey team came along at the perfect time. Suddenly, America felt good about itself again.

Not that Brooks allowed himself, Patrick or their players to feel good. Not just yet, anyway. There still was that game against Finland.

"The practice the next day was our hardest at the Olympics," Patrick said. "Herb totally stayed on those guys all of the time."

The U.S. team trailed, 2-1, after two periods but scored three times in the third period to beat Finland, 4-2, and win the most remarkable gold medal in Olympics history.

Even then, Brooks didn't allow the players' celebration to get out of control.

"I remember we went to some really nice lodge outside of town," Patrick said. "We're all there having a good time and Herb says, " 'OK, let's go. Back to the trailers.' We were sequestered in trailers during the Olympics.
Anyway, we were going to the White House the next day and Herb wanted the team at its best for that, too. That was Herb." 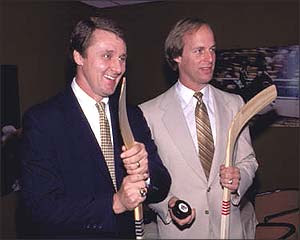 Herb Brooks and Craig Patrick after Brooks was named the head coach of the New York Rangers in 1981.

Patrick knew something was up when President Jimmy Carter sent Air Force One to Lake Placid to pick up the team along with speed skating hero Eric Heiden. But it wasn't until the bus ride from Andrews Air Force Base to the White House that the team's accomplishment fully hit him.

"People lined the streets on both sides for miles, waving American flags," Patrick said. "That's when it was like, 'Wow! We did something.'"

We'll be saying it about that amazing hockey team for a long, long time.

Penguins Plus, a blog by Dave Molinari and Shelly Anderson, is featured exclusively on PG+, a members-only web site from the Pittsburgh Post-Gazette. Our introduction to PG+ gives you all the details.