Guns Before the Court

Today the Supreme Court will hear argument in a case that is likely to result in a landmark decision. In McDonald v. Chicago, the Court will consider whether the individual right to bear arms it recognized in District of Columbia v. Heller can be enforced against State and local governments. In doing so, it may address more broadly the way in which individual rights are enforced against the States and the extent to which State and local governments can regulate or restrict those rights. 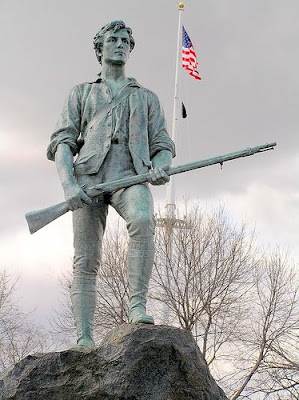 Statue of Captain John Parker of the Lexington Militia on Lexington Green, Massachusetts

The case involves a challenge to a City of Chicago ordinance essentially prohibiting the possession of handguns. In Heller, the Supreme Court held that a similar handgun ban enforced by the District of Columbia violated the Second Amendment. However, the Court did not address whether the Second Amendment prohibited States and local governments from enacting similar restrictions. The Court considered only whether the federal government, through its supervision of the District, could be prohibited from taking such action.

The Supreme Court's decision in Heller is a resounding affirmation of the fundamental right to bear arms. The Court analyzed the plain language and history of the Second Amendment at length, and concluded that it plainly guaranteed an individual right to own and possess firearms. However, the Court's decision in Heller left several questions unanswered, including the extent to which that right to bear arms could be regulated and whether it could be enforced against State and local governments.

While the Heller decision strongly supported an individual right to bear arms, the Court was deeply divided, issuing a 5-4 decision split largely on ideological lines. Accordingly, the outcome in McDonald is far from clear.

Adding to the drama is an emerging controversy among gun right proponents. The sole issue in McDonald is whether the Second Amendment right to bear arms is "incorporated" through the Fourteenth Amendment so that it applies to the States and local governments. That question should have a straightforward answer based on decades of Supreme Court precedent. The Court has incorporated numerous provisions of the Bill of Rights through the Due Process Clause of the Fourteenth Amendment.

Petitioners' approach has generated significant controversy. The National Rifle Association, which submitted a brief in the case, also took the unusual step of seeking to participate in oral argument. In doing so, it seeks to advance the more traditional view of incorporation, focusing on the Due Process Clause and the Court's precedent incorporating similar Bill of Rights provisions.

At the end of the day, McDonald is likely to be a repeat of the Heller decision, incorporating the Second Amendment in a narrow 5-4 decision. However, the decision presents the thorny question of how far lawyers should go in advocating particular ideological views that may detrimental to their clients. The most clean-cut and powerful argument for incorporation of the Second Amendment is undoubtedly based on the decades of Supreme Court precedent incorporating various Bill of Rights protections under the Due Process Clause of the Fourteenth Amendment. However, application of the Privileges or Immunities Clause might result in a broader and more unrestricted right to bear arms. This is the tension at the heart of the McDonald case. Those supporting broad Second Amendment rights can only hope that this tension does not undermine their position seeking enforcement of the Second Amendment against the States and local governments.


- Douglas Smith is a Senior Lecturer in Residence at Loyola University Chicago School of Law and adjunct scholar at the American Enterprise Institute who has written extensively on the Second and Fourteenth Amendments and filed a brief in support of respondents in District of Columbia v. Heller.
Posted by jtf at 11:07 AM