All in the Modern Family

The genre has been declared dead many times, but a hit show is reviving the half-hour TV comedy with a combination of edge, quirkiness—and family values.

What do you call a mother of three, naked under her trench coat that gets caught in a hotel escalator just as she randomly bumps into her father and his much-younger Colombian wife whose 11-year-old son is trying to woo a girl with the help of his stepbrother, his stepbrother's partner and their adopted Vietnamese baby daughter, who was dressed by one of her fathers in one of his feather boas for Valentine's Day? 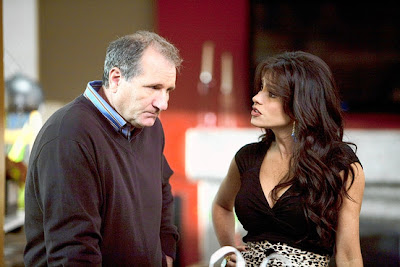 Ed O'Neill and Sofia Vergara as Jay and Gloria in 'Modern Family.'

ABC's "Modern Family" is a first-season hit and one of the few half-hour TV comedies to break out in recent years, partly because its creators are invoking the edgy sensibility of cable TV shows such as "Weeds," "South Park" and "Curb Your Enthusiasm." Exploring three branches of a dysfunctional family, it is the first network comedy hit to largely focus on a gay couple raising a child. (The short-lived "It's All Relative" touched on the topic six years ago.)

But in truth, "Modern Family" is a conservative show, steeped in the conventions of sitcom history. Created by two veteran TV writers, Steven Levitan and Christopher Lloyd, "Modern Family" descends from a lineage of family sitcoms like "All in the Family" and "The Cosby Show"—programs that broached combustible social issues, but within the safe confines of loving families. Mr. Lloyd grew up with these traditions: his late father is the legendary television writer David Lloyd ("The Mary Tyler Moore Show," "Cheers," "Taxi").

"I remember hearing from Dad that for good story-telling, you have to give all the characters something they want and set up obstacles to them getting those things," he says.

Like many classic sitcoms, "Modern Family" is careful to end each show with a figurative, if not literal, family hug. This distinguishes it from a precursor: "Arrested Development" was a cult hit, but it never won a large audience; viewers seldom had the sense that these family members liked each other.

TV comedy has been declared dead many times. Some say this is the longest drought since the early 1980s (then came "Cosby"). Besides critical praise, "Modern Family" is pulling in an average 9.48 million viewers per episode—more than "Glee," "The Office," "30 Rock" and "The New Adventures of Old Christine," which is the most recent surviving comedy to have had, in 2006, as good an opening season as "Modern Family." And this comes in the battleground time slot of Wednesdays at 9: since it began to face off against "American Idol" in January, "Modern Family" has held firm, according to Nielsen Co. 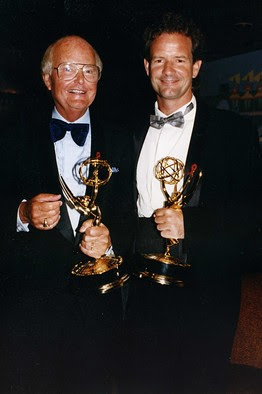 "Modern Family" writer Christopher Lloyd writes a remembrance of his late father, comedy writer David Lloyd who wrote for such shows as "Cheers," "The Mary Tyler Moore Show" and "Frasier."

The thread that has attracted the most attention is that which follows Mitchell (Jesse Tyler Ferguson), son of the show's patriarch, Jay—played by longtime "Married … With Children" star Ed O'Neill—and brother of Claire, who is married to Phil (Ty Burrell). Mitchell is in a committed same-sex partnership with Cameron (Eric Stonestreet), and they are raising their adopted baby daughter. In a nation torn by debate about gay marriage and adoption, it's an eyebrow-raising family situation for network television. (ABC reports no large-scale protests or consumer boycotts of the show.)

The writers dig into some of the tensions between straight parents and gay children that emerge even within the realm of relatives that love and mostly accept each other's lifestyles. Jay cares about spending time with his son's partner, but when the chosen activity is racquetball, he worries about being in a locker room with a gay man, telling the camera documentary-style, "I mean, for me it's a locker room. For him, it's a showroom." When Cameron runs into Jay and his friends outside a restaurant, Jay introduces Cameron as a "friend of my son's."

"They have been so smart in the portrayal of what it means to be gay in a family that tries but sometimes fails to be totally welcoming," says Jeffrey Richman, a writer who has worked with Messrs. Lloyd and Levitan on sitcoms like "Frasier," and is gay.

Yet Mitchell and Cameron are actually the most normal of the lot. While Cameron can play to gay stereotypes with his dramatic hand gestures, he and Mitchell are mostly depicted as adults trying to survive parenthood. A recent episode had them fighting with each other amid the stress of trying to sleep-train an infant. Cameron calls the method of allowing a baby to cry itself to sleep "torture" and sobs uncontrollably as he listens to his daughter's wails over the baby monitor; Mitchell rolls his eyes at his partner's histrionics. It harks back to "The Cosby Show," which was revolutionary in portraying an upper-middle-class black family as an upper-middle-class family that just happened to be black.

"Modern Family" is filmed with a single camera, unlike the many sitcoms shot by multiple cameras on a stage. The show's actors occasionally speak directly to the camera in "mockumentary" style, so the writers can avoid canned, clunky scenes to explain motivations and feelings. The humor seems more natural and subtle. "It's very underplayed and that's hard to do in comedy," says James Burrows, the prolific sitcom director and co-creator of "Cheers." 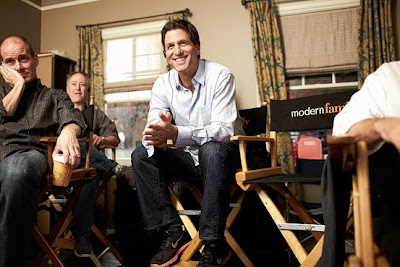 
In 2008, Messrs. Levitan and Lloyd were coming off a high-profile failure in "Back to You," a workplace sitcom with big stars: Kelsey Grammer and Patricia Heaton. Friends since they worked together on the staff of "Wings," the writing partners would meet at their office and casually bat around ideas, telling tales about their wives and kids. "We were licking our wounds and we would just end up telling funny stories about what happened that weekend at home," Mr. Levitan says.

Late that summer, they pitched the idea to Twentieth Century Fox Television, which wound up producing the show (and, like The Wall Street Journal, is owned by News Corp.). Mr. Levitan described a (slightly embroidered) incident when he went into his eldest daughter's room to tell her to shut off the computer and go to bed, then heard a voice from the computer say, "Nice boxers, Mr. Levitan." (She was Skyping with a friend.) This resurfaced in an episode of "Modern Family" when Claire, played by Julie Bowen, finds herself, in undergarments, getting ogled by her teenage daughter's boyfriend who is hanging out in the daughter's bedroom, via video chat.

The two writers are funneling not just their personal lives, but also bringing to the show a history of professional angst and ambition in a frustrating field. Mr. Levitan, 47, was a TV news reporter in Wisconsin when he decided he wanted to write sitcoms. He worked for Disney producing movie trailers while he wrote spec scripts and networked. He landed a staff writing position on the 1990s NBC sitcom "Wings." Later, he worked on "The Larry Sanders Show," then took a staff job on "Frasier" for one year, during which time he was creating and developing the pilot for "Just Shoot Me," which starred David Spade and Wendy Malick. From there, he jumped from failure to failure, such as "Greg the Bunny" and "Stacked," a sitcom in which the pin-up Pamela Anderson played a bookstore clerk. "I overestimated the American public's willingness to see Pamela Anderson as anything other than Pamela Anderson," he says.

To go from writing a part for a "Baywatch" alum to getting praised by the likes of Mr. Burrows has left Mr. Levitan buoyant. The morning that "Modern Family" was nominated for a Golden Globe for best comedy or musical series, Mr. Levitan tweeted, "A very good morning! My tuxedo has 'Dust Me' written on it." (The show later lost to "Glee.")

Mr. Lloyd got his first staff job writing for "The Golden Girls." From there he went to "Wings," and then worked as the executive producer at "Frasier" for eight years. (His father worked for him on "Frasier.") He created a few shows; they all tanked. He and Mr. Levitan then teamed up to create "Back to You," and were pained by its swift cancellation. They took some time off, then reconvened to imagine their next big idea. Mr. Levitan wanted to do something more sophisticated and biting than a typical sitcom. He worried about doing a straight family show. "Family shows become sappy and a little familiar," he says.

But he felt that pitfall could be avoided with a single-camera, faux-documentary style like that of "The Office." Mr. Lloyd, by contrast, was growing leery of the state of sitcoms, many of which seemed needlessly snarky and risqué.

"Warmth has gone out of fashion, and that has never made sense to me. If you make audiences laugh for 29 minutes and then feel some warmth at the end, they'll come back week after week," he says. 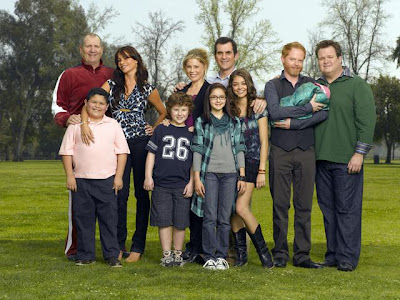 On the makeshift set of the Valentine's Day episode of "Modern Family" at the Century Plaza Hotel, a scene features comedian David Brenner delivering a stand-up routine. Jay and his young wife Gloria (Sofia Vergara) are in the audience and withstand a slew of barbs aimed at their age difference: "How do you know your husband is cheating on you? He comes home with two sets of teeth in his mouth."

As the shooting takes place, Mr. Levitan tries to sit in the chair set up by the director's monitor, but he can't be still. He paces. "I'm Type-A," he says, iPhone in his hand.

The end of the scene calls for Jay/Mr. O'Neill to walk out of Mr. Brenner's show, embarrassed and insecure. His wife assures him she will always stay with him.

"What about when I'm 80, when I'm in a wheelchair and need oxygen?" asks Jay.

Gloria, who is a native of Colombia, responds: "What if I gain 100 pound? You going to leave me?"

As dictated by the script, Jay pauses briefly and answers, "No!"

At the end of the take, Mr. Levitan says, "Ed, let's try that again, but let's have a nice long pause before you answer her."

Ms. Vergara as Gloria again asks her husband—rhetorically—if she'd leave her if she got fat. Mr. O'Neill's Jay stands, a deer in headlights, saying nothing as his wife begins narrowing her eyes, angry. "No!" he finally says.

But Mr. Levitan is not totally satisfied. He asks for one more take—same pause but with a slight adjustment to the scene's end. "I feel like a kiss is called for," says Mr. Levitan.

Write to Katherine Rosman at katherine.rosman@wsj.com
Posted by jtf at 11:52 AM

Thank you Lloyd and Levitan for re-kre8-ing family life. And thank you Ms. Rosman for chronicling their success. I hope you inspire more "warm" shows. Our generation needs them.

(Wonder what I mean by re-kre8-ing, check out my blog. www.re-kre8.blogspot.com)