A Muslim leader who has tried to portray the founder of the Congressional Anti-Terrorism Caucus in Washington as an extremist "hatemonger" was himself exposed as an extremist on a popular radio program.

For years, Jibril Hough has represented himself and his North Carolina mosque as "moderate," while putting Rep. Sue Myrick, R-N.C., on the defensive as an anti-Muslim fanatic who "shoots from the hip" when sounding the alarm about homegrown Islamic terrorism. Myrick, a member of the House Intelligence Committee, co-founded the Capitol Hill caucus after 9/11 to educate Americans about the growing threat from jihadists. 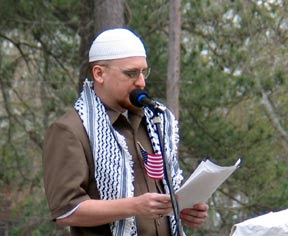 But during an in-studio interview Friday with Charlotte radio personality Keith Larson of WBT-AM, Hough was confronted with documents revealing his mosque – the Islamic Center of Charlotte – is owned and controlled by an organization connected to a plot to funnel millions of dollars to Islamic terrorists.

The North American Islamic Trust holds the deed to ICC, an 800-member Sunni mosque located on five acres at 1700 Progress Lane in Charlotte. The U.S. Justice Department recently blacklisted its owner NAIT as an unindicted co-conspirator in the largest terror finance case in U.S. history.
The government also identified NAIT as a front for Hamas and the radical Muslim Brotherhood in America.

Saudi-funded NAIT owns the title to hundreds of radical mosques across the country, including the notorious 9/11 mosque in Northern Virginia – Dar al-Hijrah Islamic Center (deed) – which helped some of the hijackers obtain housing and IDs and also counseled the Fort Hood terrorist and several other known terrorists.

Hough, ICC's spokesman, at first expressed surprise when confronted with the information, claiming he'd never before seen the deed and did not know NAIT was named in a federal terror probe.

"I'm not aware of this information here," he said, reviewing the documents.
Pressed by Larson, the ICC spokesman later admitted NAIT is the "parent" of his mosque, but quickly added that he was not a member of the mosque when NAIT took control in 1992.

"I was not involved in the decision to allow NAIT to be the (title) holder," he said.

Asked if he were a member of NAIT, Hough paused before answering: "Not necessarily."

Larson said it looked as if his mosque was acting as a "front" for an organization tied to terrorism, and wondered why Hough was not more concerned.

"To everybody else it looks not just concerning but absolutely damning," the host responded. "Do you understand that?"

"What else can I say?" Hough said.

"Will you disassociate yourself" from NAIT? Larson asked.

As reported in the bestselling book, "Muslim Mafia: Inside the Secret Underworld That's Conspiring to Islamize America," current NAIT trustee Gaddoor Saidi also shows up on the Justice Department's list of unindicted co-conspirators in the Holy Land Foundation scheme to fund Hamas terrorists. The Holy Land case ended in 2008 with guilty verdicts on all 108 counts.

A Muslim convert, Hough [pronounced: Huff] denied being affiliated with Hamas, but then proceeded to defend the terrorist group, claiming "they haven't attacked Americans."

In fact, Hamas has murdered 17 Americans and injured hundreds of other U.S. citizens in suicide bombings and other terrorist attacks in Israel. The U.S government designated Hamas a terrorist organization in 1995.

Hough also said he had a problem with the definition of "terrorism," and suggested that the U.S. and Israel are committing the only real terrorism by retaliating against Muslim terrorists and extremists.

"What is 'terrorism?'" Hough said. "Terrorism against Iraqis, Palestinians, Afghanis?"

Hough also denied affiliation with the Muslim Brotherhood, an Egypt-based worldwide jihadist movement which gave rise to Hamas and al-Qaida.

However, current NAIT Chairman Muzammil Siddiqi appears in secret Brotherhood documents as a high-ranking member of its shura council in America, according to documents cited in "Muslim Mafia."

"Within the organizational structure of NAIT, there have been numerous groups and individuals identified as being part of a covert network of revolutionaries," the FBI warned in a previously classified internal memo about the Muslim Brotherhood.

"This faction of Muslims have [sic] declared war on the United States, Israel, and any other country they deem as an enemy of Islam," the memo continues, as quoted in "Muslim Mafia." "The common bond between these various organizations is both religious and political, with the underlying common goal being to further the holy war (Islamic jihad)."

Justice recently declassified a U.S. Muslim Brotherhood manifesto that lists ICC's owner NAIT among Brotherhood front groups participating in a seditious conspiracy of "eliminating and destroying the Western civilization from within" through a "grand jihad," with the ultimate goal of making Islam "victorious over all religions."

The secret manifesto was found in a terrorist suspect's home in Northern Virginia and entered as evidence in the Holy Land Foundation trial.

According to "Muslim Mafia," NAIT was founded in 1973 with massive funding from the Saudis. It was formed as an investment vehicle for the Muslim Brotherhood in North America, acquiring title to more than 300 mosques and Islamic schools in the U.S.

Hough's radical ties are not limited to ICC and NAIT. He once headed a Jew-bashing organization called the Islamic Political Party of America.

IPPA issued a press release in 2003, when Hough was identified as the chairman of the group's national board, that suggests the Jews were behind 9/11, a rumor that first appeared in the Arab press and was summarily discredited.

"But the biased Western media would not cover this story, yet they also neglected to report that 4,000 Jews employed at the World Trade Center were absent at (the) WTC on 9/11," Hough's organization wrote in the press release. "Nor did they report on the thousands who saw WTC Building Seven fall without a plane hitting it."

The revealing radio interview with Hough took place the day after Myrick agreed to meet with local Muslims in a local town hall meeting to hear their complaints. Hough demanded she meet at his mosque, but the venue was changed to a government building to accommodate Shiite and Sufi Muslims as well.

Myrick said she was open to meeting at a mosque at a future date.

In the first part of the WBT interview, Hough took the opportunity to criticize Myrick, who planned to join him in the interview but had to fly back to Washington for a hearing and could not participate.

"Sometimes when she shoots from the hip, it looks like she's painting with a broad brush," Hough told Larson.

"People with an [anti-Muslim] agenda are whispering in her ear," he claimed.

"I doubt some of the information she's been fed is correct," Hough continued. "It's clouded her judgment."

As a member of the House Intelligence Committee, Myrick receives highly classified briefings from the FBI, CIA and National Counter Terrorism Center.

Hough named bestselling author and JihadWatch.com director Robert Spencer as one of the people he believes is "whispering" in Myrick's ear.

"Spencer clearly has an agenda against Muslims," Hough insisted.