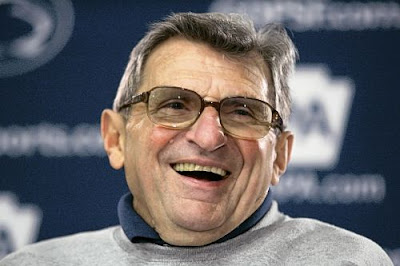 So if his signed glasses are worth that much, then what price tag can be placed on the 83-year-old Paterno's value to the school in his 44 seasons at the helm of the football program?

Not even the university can answer that question, although it has reaped the profits and benefits of Paterno's high profile to become the third-most valuable football program in the country.

Forbes magazine recently rated the Nittany Lions' football program No. 3 with an overall team value of $99 million, based on revenue and profits. It trailed only Texas ($119 million) and Notre Dame ($108 million) in the national rankings, and was significantly higher than No. 8 Ohio State ($85 million) and No. 11 Michigan ($81 million) in the Big Ten Conference.

Forbes also reported that Penn State generated $66 million in revenue and earned a profit of $50 million for the 2008 season, although Kaluza said those numbers are a bit high. He said Penn State generated $61,767,717 in revenue and $42,635,760 in profit. One of the major discrepancies is that Forbes' numbers include seat donations from the Nittany Lion Club -- the booster club -- as part of its overall revenue, while Penn State's figures do not.

Penn State president Graham Spanier agrees: Paterno is the patriarch of the franchise. He also is the winningest coach in Division I-A history with 394 victories.

"The success of our program can be attributed to Joe Paterno's great leadership, the commitment of his staff and the support of the administration of Intercollegiate Athletics, our ability to make improvements in facilities, loyal fans, the revenue stream from the Big Ten associated with our television contracts and the national interest in our program," Spanier said.

Penn State's football program has not always been so profitable.

"We needed better facilities, so I'd go around trying to raise some money. I would go to different groups and say, 'I want your money, but I don't want your two cents.' "

Make no mistake, football is the power broker for the majority of Penn State's other varsity sports.

This past season, 856,066 fans made their way to Beaver Stadium, an average of 107,088 for the eight home games. It was the second-highest attendance total in school history.

The Lions have finished among the top four schools in attendance in Division I for 19 consecutive seasons. And the Lions have played in front of more than 1 million spectators in 10 of the past 12 years.

"Penn State football brings tremendous revenue to our athletic programs and visibility to the university," Spanier said. "I am very pleased with our program's success. Since we are a not-for-profit enterprise, we don't make a profit per se.

"All of the revenues from football are used to support 27 other intercollegiate athletic programs at Penn State. Men's basketball is the only other self-supporting sport."

A good portion of Penn State's profits from football are used for travel, capital projects -- such as a new softball field -- sports medicine, academic support and scholarships.

"In terms of a headline, 'Most-valuable teams,' there's good and bad to that," Kaluza said. "Being up there with Texas and Notre Dame, two highly successful football programs with great traditions like ours, is nice for all of us.

"But, on the flip side, if we're so valuable, then our fans are asking, 'Why are we raising ticket prices?' It's kind of a catch-22 situation."

The new pricing guideline begins at $100 per year for each ticket, primarily around the end zones. There are $400 and $600 seats from the 10-yard lines to the 50. For a much smaller section at midfield, there is a $2,000 charge for seats with backs.

The athletic department said the $55 price of a ticket would not change. Nittany Lion Club members must pay at least $100 per seat to renew their season tickets, regardless of where they sit.

The Seat Transfer and Equity Plan also gives booster club members "a first-time opportunity" to transfer those tickets to someone else -- for a one-time donation ranging from $500 to $2,000 per seat in one of the four new pricing zones. Season ticket-holders who do not pay the new charge could have their seats moved. Student tickets would not require an annual fee.

"When we first rolled the new ticket plan out, we got lots of feedback on it, and most if it wasn't good, which was understandable," said Greg Myford, Penn State's associate athletic director for business relations and communications. "But it's very quiet right now. There's no urgency; there's nothing going on. The new ticket plan doesn't impact this coming season.

"The one thing that I want to be clear on is, I think some people erroneously think Penn State is doing this without a lot of thought put into it, or believing that there is no risk to us. That's far from the truth.

"If there was no risk in it, it would not be so controversial and we would have done it a long time ago."

Penn State officials also worry what will happen to the school's fundraising and budget once Paterno is no longer leading the program. He has two years remaining on his contract.

"Some people walk up to Joe now and just hand him a check, but we have no idea what's going to happen once coach Paterno is gone," Kaluza said. "It's the great unknown. Everyone knows he is a real bargain."

Paterno earned more than $1.03 million in 2008 in salary and bonuses, according to records released by the university, but that did not include outside compensation.

"If we go outside to hire a coach, we know what Mack Brown of Texas makes [$5.1 million] and we know what Nick Saban [$4.7 million] of Alabama makes," Kaluza said. "So, is that where we'll need to be? Probably. And that figure doesn't even include the assistant coaches.

"If we stay inside and [defensive coordinator] Tom Bradley is the new coach, then we can probably keep things a little closer to where we are now."

Kaluza said Paterno rarely has used the university's jet for recruiting purposes, but that could change, too, if the university hires a coach from the outside.

"If a new coach comes in, he's going to want to be on the university jet all the time, going here and going there to see these high school recruits play their games," Kaluza said. "Every time he hops on that university jet, it's going to be another $6,000 or $7,000."

Penn State's football program is one of the most valuable in the nation (figures in millions):

Ron Musselman's Penn State blog and videos are featured exclusively on PG+, a members-only web site from the Pittsburgh Post-Gazette. Our introduction to PG+ gives you all the details.