Pamela Geller is calling attention to a major “Hannity” segment Fox News aired last night: an interview with Mosab Hassan Yousef, an ex-Muslim for whom “whistleblower” is the Understatement of the Year: 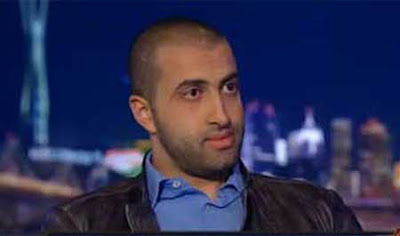 Mosab Hassan Yousef is the son of a jailed Hamas terrorist leader and MP, Sheikh Hassan Yousef, the most popular figure in that extremist Islamic organization. Mosab, as a young man, assisted his father for years in his political activities. He converted to Christianity and operated undercover in the service of Israel’s intelligence agency for a decade. Yousef reveals this information in an upcoming book, Son of Hamas: A Gripping Account of Terror, Betrayal, Political Intrigue, and Unthinkable Choices.

In other words, not somebody who can be dismissed as some bigoted right-wing fear-monger, but somebody whose opinion was shaped by years of personal experience and what must have been agonizing soul-searching. And what is his conclusion? Not only does he unequivocally condemn the murderous ways of Hamas, but he also has harsh words for Islam itself:

Mosab Hassan Yousef: “The god of the Koran hates Jews anyway, if there was “occupation” or not”

The problem is with the god of Islam”

“this is not about being brainwashing, this is how people grow up everything around you in that society school, street every evet is telling you those facts about Islam.”

Hannity: We keep hearing about that there is a distinction, the difference between radical Islam and mainstream Islam

Mosab Hassan Yousef: This is a big mistake. Comparing between moderate Muslims and fanatics. This is not how we compare it. All Muslims to me are the same. At the end of the day they believe in thegod of the koran and they believe that this koran is from that god.

Hannity: You’re saying that most Muslims think that jihad is where they need to go

Mosab Hassan Yousef: It’s not their choice. If they believe that the koran is from the word of god ………..

Hannity: So let me ask this again. So when people talk about moderate Islam, you’re saying it doesn’t exist?

At this point, many will object to Mosab’s denial of the very existence of moderate Muslims, and not without reason—there’s the Free Muslims Coalition, there’s Irshad Manji, and as Ryan Mauro recently highlighted, there’s the UK’s Sheikh Muhammad Tahir ul-Qadri, who just issued a comprehensive fatwa against jihadist ideology. Indeed, Mosab himself says:

Muslims have moralities, responsibilities, logics, more than their god. The most criminal terrorist Muslim has morality, a minimum of humanity, more than his god.

However, acknowledging the existence of decent, humane people who call themselves Muslims doesn’t invalidate Mosab’s premise; it simply raises the very real possibility that the decent people aren’t the ones practicing the truest interpretation of their faith. That’s a harsh conclusion that many will doubtlessly find uncomfortable, but in our zeal to avoid offending anyone, it would seem equally offensive to dismissively assume a man born and raised in the world he describes, risking his life to tell his story, doesn’t know what he’s talking about.

The Left condemns all claims that Islam is anything but a “Religion of Peace” as mere right-wing slander, insisting that there’s no need to take a closer look at the ideology motivating our enemy. But the truth is, most Americans couldn’t even begin to imagine the things Mosab Hassan Yousef has been through, the physical danger he has subjected himself to, and the decision to split from his own father to do the right thing; in return, the least we could do is listen.