AWOL in the Bunning Battle

The GOP shows why Obamacare is a good bet for the Left. 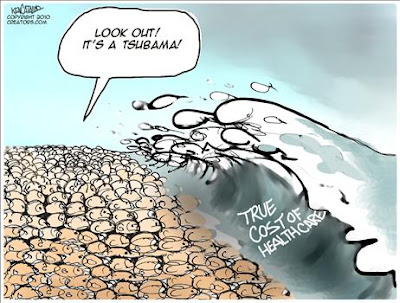 The Kentucky Republican finally caved in Tuesday after relentless pressure from other senators — including Republicans — to drop what the Politico called his “one man” filibuster of a bill to extend expiring unemployment benefits. Technically, it was not a filibuster. It was an objection to a procedure, called “unanimous consent,” used to speed along uncontroversial legislation.

In this case, there ought to have been raging controversy: Bunning was objecting to yet another monthly extension of unemployment payments absent an explanation of how it would be paid for.

He was right to do so. These extensions happen continually. The stimulus — which is a redistribution of wealth from the private to the public sector, and from people who work to people who don’t — extended unemployment benefits for 53 weeks. Another extension in November added 20 more weeks. Cato’s Alan Reynolds reports that this brings the total to 99 weeks of benefits in high-unemployment states. The measure on which Bunning has relented adds another month. And having browbeaten him into withdrawing his objection, Democrats will now seek an extension through the end of this year, i.e., another 36 weeks or so.

None of this is paid for. Instead, the government borrows ever more money, incurring ever more debt and ever more interest on that debt. The price tag on the relatively modest, stopgap measure Bunning was blocking is put at $10 billion, but that does not count the interest that will be paid on the money borrowed to fund the bill. To count the interest would be to highlight the fact that we are filching the money from our children and their children rather than paying for spending today by cutting something else. Bunning wasn’t even against spending the money; he just wanted the something else identified and cut.

That proved unacceptable, and not only to Democrats. Maine’s Susan Collins took to the Senate floor to assure Americans that Bunning’s radical views about Congress’s not spending yet more billions it doesn’t have “do not represent a majority of the Republican caucus.” And sure enough, they didn’t. Once Bunning backed down, the measure passed by a whopping 78-19.

Think about that. We are talking about $10 billion in a year when Leviathan is slated to spend a total of $3.6 trillion. The majority of Senate Republicans joined Democrats in concluding that the allocation of every one of these 3.6 thousand billion dollars is so vital that not one of them could be sacrificed in favor of unemployment insurance. So another $10 billion just gets heaped on the already unfathomable trillion-dollar deficits stacking year upon year.

The pols call these mounting months (now years) of unemployment benefits “temporary,” even though the real unemployment rate remains in the double digits and no relief is in sight. The “temporary” label is a budgetary trick. It enables lawmakers to sidestep “PAYGO” — Pay As You Go — restrictions that require the federal government to pay for current obligations out of current revenues. Democrats recently made a big show of reinstituting PAYGO — but not until after they’d blown deficit spending through the stratosphere.

It was a bit of theater Democrats had good reason to believe they could pull off. When Republicans controlled Congress, they made a mockery of PAYGO entitlement restrictions, particularly when it came to enforcing Medicare cuts that were required by law. As the Heritage Foundation’s Bruce Riedl observes, PAYGO was a gimmick to project the illusion of fiscal responsibility even as budget deficits soared. Thus it comes as little surprise that, even as President Obama’s sudden paeans to PAYGO ring in our ears, Democrats are slyly sidestepping it.

Besides unemployment compensation, what is in the bill Bunning was blocking? The proposed goodies include public funds to prevent what would otherwise be a 21 percent reduction in payments to doctors who treat Medicare patients.

Of course, these are exactly the sort of steep cuts that enacting Obamacare would accomplish. Given that enacting Obamacare is the Left’s ne plus ultra, why not just let the Medicare payments get slashed now? Because Democrats realize that if people get a load of how Obamacare would actually work before it is a fait accompli, they will scream bloody murder. So the game is to make certain that doctors don’t feel the pinch now, just as the game is to pass Obamacare now but delay its implementation until 2013 — allowing Obama and Democrats to get through the 2010 and 2012 election cycles without being held accountable for the epic disaster that will be government-controlled medicine.

In sum, Bunning’s battle gave Republicans a chance to make points about runaway deficit spending, the fraudulence of PAYGO posturing, the foolish redistribution of wealth to create expensive and unproductive government jobs, unemployment-benefit extensions that Democrats refuse to pay for and that actually increase unemployment, and the monstrous rationing that would be wrought by Obamacare. So, did Republicans rally behind Bunning? Not a chance.

Why? Why abandon this fight when the GOP has the facts on its side? Why no enthusiasm when a year of Obama’s forced march to crony socialism has the public more receptive than ever to the case for slashing government? Simple: Republicans are afraid of being demagogued — as Democrats and the media demagogued Bunning — as wanting to cut off funding (i.e., money we don’t have) for unemployment insurance and the usual laundry list of other Big Government baubles like COBRA coverage, satellite TV dishes, the “highway trust fund,” etc. Republicans also did not want their own sorry PAYGO history rehashed.

Here’s the sad truth: For all the shining they did at last week’s White House “summit” on health care, when it gets down to actually putting the brakes on the Big Gummint Express, most of today’s Republicans are AWOL. They’re great at the debate society. But making the fight on something concrete, really saying no when it means grinding redistribution to a halt, means taking the slings and arrows. No thanks, they say, let’s just make the whole thing go away on a voice vote, the sooner the better. Indeed, while Senator Bunning should be lauded for engaging this fight, it is telling that he took it on only after deciding not to seek reelection.

In a Corner post this past weekend called “Transformation,” I dissented from the heady palaver on the Right about how Democrats are headed for a November Waterloo. I think the Left has already factored in the inevitability of setbacks — perhaps heavy setbacks — in the next few election cycles. While our side swoons over the prospect, the statists coldly calculate that these losses are a price well worth paying in order to impose a transformative takeover of the economy.

It is a perfectly rational calculation for two reasons.

First, with a significantly bigger and more powerful government bureaucracy, there will be many avenues for leadership to reward Democrats who lose their seats after casting the unpopular votes necessary to enact the Left’s program. White House chief of staff Rahm Emanuel, who spent his post-Clinton wilderness months in a lucrative sinecure at Freddie Mac, knows well how this game works — and, under Obama’s command, the economy is becoming one big Freddie.

Second, and more important, Democrats know the electoral setbacks will only be temporary. They are banking on the assurance that Republicans merely want to win elections and have no intention of rolling back Obamacare, much less of dismantling Leviathan.

For my money (while I still have some), that’s an eminently sound bet. The Bunning battle, in which the GOP was nowhere to be found, is the proof. Bunning just wanted Congress to live within its gargantuan means. Yet, the Washington Post ridiculed him: “angry and alone, a one-man blockade against unemployment benefits, Medicare payments to doctors, satellite TV to rural Americans and paychecks to highway workers.” That’s outrageously unfair, but it is a day at the beach compared to the Armageddon that would be unleashed upon any attempt to undo Obama’s welfare state on steroids.

As it turns out, Republicans didn’t have the stomach for a fight over wealth transfers that plainly exacerbate the problem of unemployment. Why would anyone think they’d take on a far more demanding war, in which Democrats and the legacy media would relentlessly indict them for “denying health insurance to millions of Americans”?

Even if the GOP gets a majority for a couple of cycles, even if President Obama is defeated in his 2012 reelection bid, Obamacare will be forever. And once the public sees that the GOP won’t try to dismantle Obamacare, it will lose any enthusiasm for Republicans. Democrats will eventually return to power, and it will be power over a much bigger, much more intrusive government.

Health care is a loser for the Left only if the Right has the steel to undo it. The Left is banking on an absence of steel. Why is that a bad bet?

— National Review’s Andrew C. McCarthy is a senior fellow at the National Review Institute and the author of Willful Blindness: A Memoir of the Jihad (Encounter Books, 2008).
Posted by jtf at 6:19 PM