Obamacare worth the price to Democrats 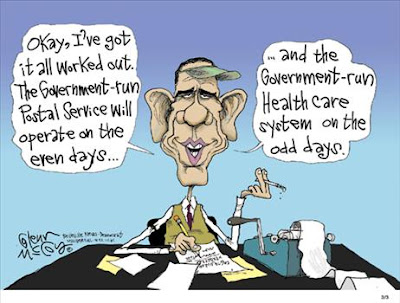 So there was President Obama, giving his bazillionth speech on health care, droning yet again that "now is the hour when we must seize the moment," the same moment he's been seizing every day of the week for the past year, only this time his genius photo-op guys thought it would look good to have him surrounded by men in white coats.

Why is he doing this? Why let "health" "care" "reform" stagger on like the rotting husk in a low-grade creature feature who refuses to stay dead no matter how many stakes you pound through his chest?

Because it's worth it. Big time. I've been saying in this space for two years that the governmentalization of health care is the fastest way to a permanent left-of-center political culture. It redefines the relationship between the citizen and the state in fundamental ways that make limited government all but impossible. In most of the rest of the Western world, there are still nominally "conservative" parties, and they even win elections occasionally, but not to any great effect (Let's not forget that Jacques Chirac was, in French terms, a "conservative").

The result is a kind of two-party one-party state: Right-of-center parties will once in a while be in office, but never in power, merely presiding over vast left-wing bureaucracies that cruise on regardless.

Republicans seem to have difficulty grasping this basic dynamic. Less than three months ago, they were stunned at the way the Democrats managed to get 60 senators to vote for the health bill. Then Scott Brown took them back down to 59, and Republicans were again stunned to find the Dems talking about ramming this thing into law through the parliamentary device of "reconciliation." And, when polls showed an ever larger number of Americans ever more opposed to Obamacare (by margins approaching three-to-one), Republicans were further stunned to discover that, in order to advance "reconciliation," Democrat reconsiglieres had apparently been offering (illegally) various cosy Big Government sinecures to swing-state congressmen in order to induce them to climb into the cockpit for the kamikaze raid to push the bill through. The Democrats understand that politics is not just about Tuesday evenings every other November, but about everything else, too.

A year or two back, when the Canadian Islamic Congress attempted to criminalize my writing north of the border by taking me to the Canadian "Human Rights" Commission, a number of outraged American readers wrote to me, saying, "You need to start kicking up a fuss about this, Steyn, and then maybe Canadians will get mad and elect a conservative government that will end this nonsense."

Once the state swells to a certain size, the people available to fill the ever-expanding number of government jobs will be statists – sometimes hard-core Marxist statists, sometimes social-engineering multiculti statists, sometimes fluffily "compassionate" statists, but always statists. The short history of the post-war welfare state is that you don't need a president-for-life if you've got a bureaucracy-for-life: The people can elect "conservatives," as the Germans have done and the British are about to do, and the Left is mostly relaxed about it because, in all but exceptional cases (Thatcher), they fulfill the same function in the system as the first-year boys at wintry English boarding schools who, for tuppence-ha'penny or some such, would agree to go and warm the seat in the unheated lavatories until the prefects strolled in and took their rightful place.

Republicans are good at keeping the seat warm. A bigtime GOP consultant was on TV, crowing that Republicans wanted the Dems to pass Obamacare because it's so unpopular it will guarantee a GOP sweep in November.

OK, then what? You'll roll it back – like you've rolled back all those other unsustainable entitlements premised on cobwebbed actuarial tables from 80 years ago? Like you've undone the federal Department of Education and of Energy and all the other nickel'n'dime novelties of even a universally reviled one-term loser like Jimmy Carter? Andrew McCarthy concluded a shrewd analysis of the political realities thus:

"Health care is a loser for the Left only if the Right has the steel to undo it. The Left is banking on an absence of steel. Why is that a bad bet?"

Indeed. Look at it from the Dems' point of view. You pass Obamacare. You lose the 2010 election, which gives the GOP co-ownership of an awkward couple of years. And you come back in 2012 to find your health care apparatus is still in place, a fetid behemoth of toxic pustules oozing all over the basement, and, simply through the natural processes of government, already bigger and more expensive and more bureaucratic than it was when you passed it two years earlier. That's a huge prize, and well worth a midterm timeout.

I've been bandying comparisons with Britain and France, but that hardly begins to convey the scale of it. Obamacare represents the government annexation of "one-sixth of the U.S. economy" – i.e., the equivalent of the entire British or French economy, or the entire Indian economy twice over. Nobody has ever attempted this level of centralized planning for an advanced society of 300 million people. Even the control-freaks of the European Union have never tried to impose a unitary "comprehensive" health care system from Galway to Greece. The Soviet Union did, of course, and we know how that worked out.

This "reform" is not about health care, and certainly not about "controlling costs." As with Medicare, it "controls" costs by declining to acknowledge them, or pay them. Dr. William Schreiber of North Syracuse, N.Y., told CNN that he sees 120 patients per week – about 30 percent on Medicare, 65 private on private insurance plans whose payments take into account the Medicare reimbursement rates, and about 5 percent who do it the old-fashioned way and write a check. He calculates that, under Obamacare, for every $5 he now makes, he'll get $2 in the future. Which suggests now would be a good time to retrain as a realtor or accountant, or the night clerk at the convenience store. Yet Congresswoman Louise Slaughter, D-N.Y., justifies her support for Obamacare this way:

"I even had one constituent – you will not believe this, and I know you won't, but it's true – her sister died. This poor woman had no dentures. She wore her dead sister's teeth."

Is the problem of second-hand teeth a particular problem in this corner of New York? I haven't noticed an epidemic of ill-fitting dentures on recent visits to the Empire State. George Washington had wooden teeth, but, presumably, these days the Sierra Club would object to the clear-cutting. Yet, even granting Congresswoman Slaughter the benefit of the doubt, is annexing the equivalent of a G7 economy the solution to what would seem to be the statistically unrepresentative problem of her constituent's ill-fitting choppers? Is it worth reducing the next generation of Americans to indentured servitude to pay for this poor New Yorker's dentured servitude?

Yes. Because government health care is not about health care, it's about government. Once you look at it that way, what the Dems are doing makes perfect sense. For them.