What Was With the Peacocks and the Gothic Fiction?

Books of The Times 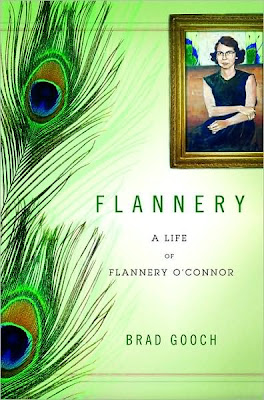 Brad Gooch’s rapt, authoritative “Flannery” is the first major biography of a writer who died 44 years ago. Where is the flood of other biographical material about this mystical, ornery, ardently admired Southern writer?

There has been at least one other account of O’Connor’s life (written by Jean W. Cash and deemed merely “a step in the right direction” by Publishers Weekly in 2002). And there have been many book-length critical studies of her work. But O’Connor has been long overdue for the major biography that Mr. Gooch has written. “Flannery” reveals not only why its brilliantly persnickety subject warrants such attention but also why it has been so slow in coming.

Here are some of the best-known facts about the author of “Wise Blood,” “A Good Man is Hard to Find” and other stories: She raised peacocks. She suffered from lupus and died of that disease at 39. She lived reclusively with her mother at Andalusia, the family farm in Milledgeville, Ga.

Her racial attitudes were uncharitable at best, and they showed up in her work. And she combined the sexual knowingness of a 12-year-old with a gender-bending fusion of Southern gothic and luridly medieval sensibilities in her mordant, theologically inspired storytelling.
Not one of these things readily lends itself to biographical inquiry. But Mr. Gooch, who reaffirms the discerning taste he demonstrated in his 1993 biography of the poet Frank O’Hara, is an unusually patient acolyte. He first expressed interest in writing an O’Connor biography nearly three decades ago, he says, only to be snubbed by O’Connor’s friend Sally Fitzgerald, who planned a book of her own. (Ms. Fitzgerald left behind an unfinished manuscript when she died in 2000.)

Mr. Gooch, who began work on this book in 2003, was ready to roam the world in hopes of penetrating the O’Connor mystique. “Flannery” may make its subject sound like a stay-at-home, but Mr. Gooch went from Georgia to Iowa to Lourdes following her trail of bread crumbs.
He also had access to a cache of recently revealed, hugely illuminating letters between O’Connor and her friend Betty Hester, who had a great crush on her. And he tracked down unpublished correspondence between O’Connor and Erik Langkjaer, the rare man known to have romantically attracted her.

Mr. Gooch’s book lacks the dimension of strong literary criticism. O’Connor’s work does not come alive on this biography’s pages, except as Mr. Gooch traces the origins of incidents and ideas. But the tart O’Connor voice, witty and flippant, immune to vanity, is very much in evidence. “Flannery” captures the spirit of the woman who described her talent this way to Ms. Hester: “I come from a family where the only emotion respectable to show is irritation. In some this tendency produces hives, in others literature, in me both.”

Since “Flannery” must sometimes grasp at straws, it begins by placing great importance on a formative childhood incident: the filming of a 1932 Pathé newsreel titled “Unique Chicken Goes in Reverse” and showing little Mary Flannery O’Connor with an early feathered companion. What did this prefigure about the adult writer? How did the chicken lead her to peacocks? What link existed in her devoutly religious mind between birds’ feathers and angels’ wings? Mr. Gooch can’t really answer those questions, but he has written a piquant book about a woman odd enough to have sewed clothing for her birds to wear.

Dropping her given first name for the sake of her writing career (“Who was likely to buy the stories of an Irish washerwoman?” she joked about not wanting to be Mary O’Connor), she had a brief but memorable stint as a cartoonist during her college days. She signed the cartoons M. F. O. C. and wrote “the usual bunk — M. F. O’Connor” when signing classmates’ yearbooks.

She propelled herself to both the Iowa Writers’ Workshop and Yaddo, the artists’ colony in Saratoga Springs, N.Y., at times when life at both places was eventful, but she managed to steer clear of trouble. When her friend Robert Lowell began exhibiting extreme behavior at Yaddo, she recalled: “I was too inexperienced to know he was mad, I just thought that was the way poets acted.”

With Lowell and his wife Elizabeth Hardwick, as with other couples, O’Connor enjoyed playing third wheel and child. But she sounded most comfortable when entrenched at Andalusia, surrounded by birds and entertaining the occasional literary visitor. “Mr. Giroux, can’t you get Flannery to write about nice people?” her mother asked the editor Robert Giroux, but O’Connor had her own notions about what nice meant.

“It’s a wonderful children’s book,” she said about the publication of “To Kill A Mockingbird” by her fellow Southern loner Harper Lee. When she inquired about films by “this man Ingmar Bergman,” she came unusually close to identifying a kindred spirit steeped in spiritual rigor. “They too are apparently medieval,” she said, considering common ground between his works and her own.

O’Connor told Ms. Hester about a movie theater in Milledgeville playing the film “Wild in the Country,” starring Elvis Presley, about “the rehabilitation of a country boy from delinquency.” “So Flannery took great pleasure in having her own country boy, Rufus, shimmy down a hallway in Norton’s dead mother’s corset, belting out Presley’s ‘Shake, Rattle and Roll,’ ” Mr. Gooch writes of “The Lame Shall Enter First.”

What makes “Flannery” so valuable is the degree of intimacy with which it captures O’Connor’s sensibility in that story. What creates a gap is Mr. Gooch’s use of the word “so.” There’s something in that “so” that he doesn’t fathom. There’s still a part of O’Connor that we can’t really know.