So far as president, Obama is startlingly like his predecessor on a number of issues. 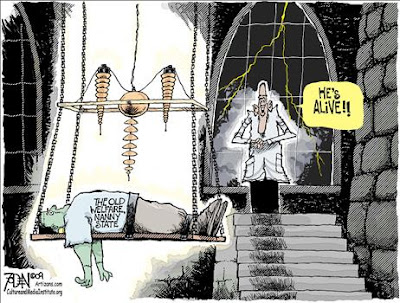 Here's something President Obama's biggest fans may need to hear: He's just not that into you.

Recall that during the primaries, Obama was probably second only to Dennis Kucinich as an anti-Iraq war and anti-Bush candidate. But he has kept President Bush's Defense secretary and appointed a secretary of State, Hillary Rodham Clinton, who voted for the war. His vice president, Joe Biden, also voted for the war. Obama himself seems to be in less of a hurry to leave Iraq than we might have expected from listening to him over the last couple of years.

The new president has ordered that his predecessor's rendition policies remain largely intact, even to the point of using the "state secrets" privilege to block a rendition lawsuit. Obama may have stated categorically that America "will not torture," but outsourcing it is still OK.

The White House also defends the Bush policy of imprisoning, without trial, enemy combatants captured abroad. Obama's lawyers argued in a court case brought by Afghan prisoners at the U.S. Air Force base at Bagram, Afghanistan, that the "government adheres to its previously articulated position" -- the one articulated by those evil Bush lawyers.

Meanwhile, a new Pentagon study commissioned by Obama has found that the prison at Guantanamo Bay meets the standards of the Geneva Convention. One can only guess how the White House will make use of that finding. At the least, it should provide cover while the administration looks for alternatives to Gitmo that might not be all that alternative.

On the domestic front, Education Secretary Arne Duncan has decided that Bush's signature No Child Left Behind Act should be retained and moderately reformed. His boldest suggestion so far? "Let's rebrand it. Give it a new name." Now that's change even cynics can believe in.

In a rare instance of consistency between his campaign and his presidency, Obama is keeping Bush's Office of Faith-Based Initiatives, though he's renamed that one.

There are many lessons one could draw from Obama's actions. You might conclude that the famous pragmatist recognizes that this is a center-right country after all. Or that he is a hypocrite, a statesman, or both, now that the buck stops with him.

You could say that this all shows that Bush's war-on-terrorism policies weren't nearly as outrageous as his opponents, Obama included, said they were. Some conservatives might argue that it demonstrates how centrist, even liberal, Bush's domestic policies were. Obama supporters might claim it proves that conservative fears that Obama was a crazy left-winger were always unfounded.

But how do Obama's biggest fans reconcile his contradictions? The slickest approach is to chalk up every about-face and inexplicable decision to Obama's abiding genius.

"Mr. Obama is like a championship chess player, always several moves ahead of friend and foe alike," explained New York Times columnist Bob Herbert. Translation: The One may move in mysterious ways, but that's no reason to doubt him.

Self-described conservatives who supported Obama in the election have made a similarly non-falsifiable argument about his qualifications (given that his record was patently unconservative): He simply has a superior presidential "temperament."

Such rationalizations reveal more continuity between Bush and Obama. Their biggest fans and foes seem driven by emotion rather than reason. We've seen this before. Bill Clinton moved his party to the right, but a lot of conservatives and liberals couldn't stomach acknowledging it. Bush was mostly a moderate Republican, but his liberal enemies hated him, and anything they hated had to be "right-wing." Even Republicans who admired Bush couldn't bring themselves to admit that the subject of their adoration might not in fact be a true-blue conservative.

Indeed, thanks in part to the lazy framing of the media and the pressure cooker of partisan Washington, conservatism became defined as Bushism, liberalism as not-Bushism, even though Bush had campaigned as a "different kind of Republican" and said over and over that "compassionate conservatism" was a sharp break with conventional conservatism.

It's early yet, but I think we're seeing with Obama what happened with Bush. The chess master is really just a man who's figuring it out as he goes along. Sometimes he'll be right; other times, horribly wrong. But whether he's right or wrong, left-wing or centrist, liberalism will likely mean whatever Barack Obama says it means.

jgoldberg@latimescolumnists.com
Posted by jtf at 4:11 PM