NEW YORK – It’s been a tough few weeks for Geert Wilders. First, an Amsterdam appeals court announced in late January that it was going to bring the blunt-speaking Dutch parliamentarian to trial for offending Muslims with his anti-Islam film, Fitna. Just a few weeks later, Wilders was controversially denied entry into Britain after the British Home Office declared that his views on Islam “would threaten community harmony and therefore public security in the United Kingdom.” 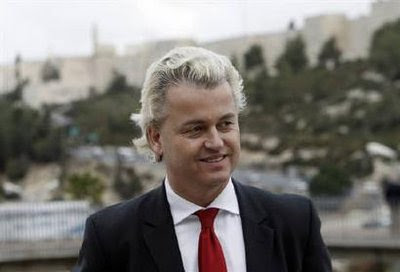 Geert Wilders poses during a visit to promote his film in Jerusalem in this December 14, 2008 file photo. REUTERS/Ronen Zvulun


Set against the near-daily threats on his life, the 24-hour security detail, and the restrictions on travel that have been Wilders’ lot since he first emerged as an outspoken critic of extremist Islam in 2004, these latest setbacks might have tested even the most determined public crusader. But Wilders seems to draw strength from intimidation, whether from aggrieved Muslims or zealous multiculturalists. So it was not entirely surprising that during a visit this week to New York, where he spoke at the invitation of the Hudson New York Briefing Council, the embattled Wilders was as upbeat and unyielding as ever.

Among other things, Wilders used the occasion to try out the defense for his likely trial in the Netherlands. “Formally, I’m on trial, but actually free-speech is on trial,” he told Front Page when asked about the pending case, which could mean a two-year jail sentence if he is convicted. It’s a typically media savvy sound bite that has the added advantage of being true. Agree or disagree with him about the distinctive dangers of Islam – and most Dutch, according to recent polls, share his suspicions that Islam is incompatible with the country’s liberal and democratic traditions – Wilders may be prosecuted for nothing more than expressing an opinion. For the Dutch appeals court, that opinion is so “insulting for Muslims that it is in the public interest to prosecute Wilders.” In the United States, where the First Amendment holds, such a ruling would not pass the laugh test, let alone proceed to trial. In the Netherlands, it may yet cost Wilders his freedom.

To add insult to legal injury, there is the recent unpleasantness in the UK. Invited by Lord Malcolm Pearson earlier this month to screen Fitna in the British House of Lords, Wilders was detained on his arrival at London’s Heathrow airport, refused entry into the country, and ultimately sent back to the Netherlands on the next available flight. For good measure, British Foreign Secretary David Miliband condemned what he called the “extreme anti-Muslim hate” of Fitna, only to admit later to the BBC that he had never actually seen the film he claimed to find so contemptible. What followed was a diplomatic row between the Netherlands and Britain that saw even Dutch Foreign Secretary Maxime Verhagen, a frequent critic of Wilders, protest the British government’s ban. “You expect something like this from Zimbabwe, but not from one of the oldest democracies in Europe,” Wilders says.

In short, Wilders is still sore over the British government’s slight. It’s not clear, though, which he considers the greater insult: his ban from the country, or the British government’s curious assurance that he was turned away in the interest “community harmony.” “What does ‘community harmony’ mean anyway?” Wilders asks. He notes, too, the obvious point that the security concerns cited by British authorities to bar him from the country had nothing to do with Wilders and everything to do with the radical Islamists who might object to his presence – an unacknowledged confirmation of his longtime charge that multiculturalism and political correctness have made European states increasingly submissive to their restive Muslim populations. In this connection, Wilders blames the “outrage of what happened in London” squarely on what he calls Britain’s “self-hating, multicultural immigration policies.”

All this notoriety, to be sure, has paid political dividends for Wilders. For instance, his Dutch Freedom Party (PVV), formerly derided by critics as a one-man vanity project, is now a surging force in Dutch politics. The latest polls show that the nine-MP party would increase its share to 25 seats in the 150-seat Dutch parliament if elections were to be held, which would make the PVV the second largest party in the Netherlands. (Wilders mischievously jokes that his many enemies in the Dutch parliament soon may have to address him as Prime Minister.) Wilders credits his latest legal troubles, as well as his ban from the UK, for his growing popularity. “There is outrage in the Dutch public that Muslims can say all the crazy things they want – about killing Jews, for instance – but when a politician stands up and says, ‘This is a threat to our security,’ he’s put on trial.”

Still, there is such a thing as too much controversy – even for Geert Wilders. He is worried about the possibility of a prison sentence. Even short of jail time, he is looking at what will surely prove a costly defense. Legal fees for his trial in the Netherlands could run as high as 100,000 to 200,000 euros ($130,000 - $257,000). “I would rather be less popular in the Netherlands and not have the trial,” Wilders admits.

Not that he’s ready to give in. Besides his signature issue – the growing threat of radical Islam to Europe – Wilders has taken up another cause, urging European Union member states to abolish hate-speech laws and adopt a free-speech standard closer to the American First Amendment. And while he is aware as ever that many European elites would just as soon be rid of him, cheerfully observing that many EU ministers would “send Jordan a bouquet of roses” were he ever extradited to the country that wants to try him for blaspheming against Islam, Wilders remains defiantly indifferent to his critics. “A lot of politicians who would like to see me behind bars, but they will not succeed,” he says. “I’m a fighter. They will not get rid of me that easily.”

Jacob Laksin is a senior editor for FrontPage Magazine. His e-mail is jlaksin@gmail.com.
Posted by jtf at 8:58 AM

My question to the Netherlands?
What ever happened to free speech?
What does Islam have to hide?
In my opinion Islam is in opposition
to individual freedoms that exist in
the West.Mr.Wilders is to be lauded.

I have a copy of Fitna and have watched it several times. It only shows the hate filled rhetoric from the Islamists who seem to hate everyone and calls for the death of all those who do not bow to Islam. It is just a factual account of what these people say and do, nothing contrived or made up. If "mainstream"Islam is not what we see here, where are the Islamic masses standing up and saying that is not us. They are strangely silent on the matter. If they are silent, they can only be termed complicit.

Islam is taking over Europe.Since European governments are to scared to close the borders it's no wonder neo-nazi's are getting larger and are having a huge impact in Europe.Whatever it takes to protect Europe I say do it.In Russia there are estimated to have around half a million neo-nazi's and are very organized.I saw this coming since the 1980's.I also have noticed different white power groups and neo-nazi groups growing very large. Muti-culturalism is dying fast in america. You cannot force people to get along with other races, it's human nature.The war of religions and races has already started and will keep exploding. Europe must halt all immigration and get rid of all non-europeans and never look back if they are to save themselves. I believe evidence of just that is showing finally.