The Immortals - The Greatest Artists of All Time: 31) Johnny Cash 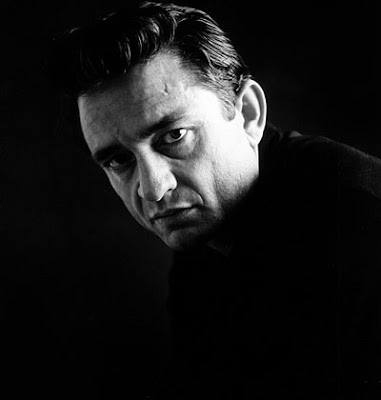 Johnny Cash was a biblical character. He was like some old preacher, one of those dangerous old wild ones. He was like a hero you'd see in a western. He was a giant. And unlike anyone else I've known, he never lost that stature. I don't think we'll see anyone like him again.

Of course, the first thing he'll be remembered for is the originality of his music. The first time I heard Johnny Cash was when he released "I Walk the Line" in 1956. It was unlike anything I'd ever heard. Elvis had had a lot of hits by that point, but "I Walk the Line" was completely different. It didn't sound much like any of the country music that was popular at the time, either. There was a kind of dark energy around John. My first hero, when I was a kid, was Hank Williams, and he had a similar energy. You could tell they were both wild men.

As a songwriter, I've always loved his lyrics. At the beginning of his career, John released a bunch of powerful songs in a very short time. For me, the best one was always "Big River." It's so well-written, so unlike anything else. The lines don't even seem to rhyme. "I met her accidentally in St. Paul, Minnesota/And it tore me up every time I heard her drawl." His imagery was so powerful: "Then you took me to St. Louis later on, down the river/A freighter said she's been here/But she's gone, boy, she's gone/I found her trail in Memphis/But she just walked up the block/She raised a few eyebrows, and then she went on down alone."

The first time I saw John live, I was on leave from the Army, visiting Nashville. He was playing the Grand Ole Opry, and I was watching from backstage -- and he was the most exciting performer I'd ever seen. At the time, he was skinnier than a snake, and he was just electric. He used to prowl the stage like a panther. He looked like he might explode up there. And in fact, there were times when he did. A couple of nights at the Opry, he knocked out all of the footlights. I think they banned him for a while after that. But they banned Hank Williams, too. They were a pretty conservative crowd. 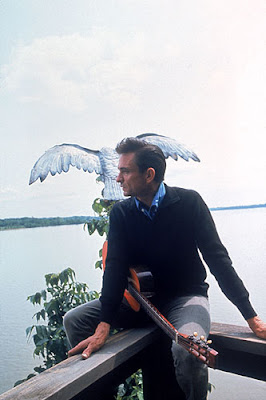 The main thing about John, though -- the thing that everybody could sense -- was his integrity, the integrity of his relationship with his music, with his life and with other people. He stood up for Bob Dylan when everyone in the music business was criticizing Dylan's move from folk to electric. And he did the same for me, in the Eighties, when I was taking a lot of criticism for going down to Nicaragua. Once I was opening for him in Philadelphia, and I dedicated a song to Mumia Abu-Jamal, who is on death row there. After I got offstage, they told me the police had gone ballistic and that I'd have to go back out and apologize. John heard about it and said, "You don't have to apologize for anything on my show." That's the kind of guy he was. Throughout his entire career, he stood up for the underdog.

I thought the last album John did, The Man Comes Around, was terrific. I remember driving on my tractor mower and listening to it on my headphones and just weeping. His version of "Danny Boy" kills me every time.

I think he'll be remembered for the way he grew as a person and an artist. He went from being this guy who was as wild as Hank Williams to being almost as respected as one of the fathers of our country. He was friends with presidents and with Billy Graham. You felt like he should've had his face on Mount Rushmore.

You should have dedicated a song to Officer Faulkner...the man Mumia gunned down. Liberal P.O.S. Now on my personal excommunicated list.