By Mark Steyn
HAPPY WARRIOR
From the February 23, 2009 issue of National Review
http://www.nationalreview.com/

The other day I found myself wondering when the conversion rate would become an avalanche. To Islam, I mean. If you’ve been following recent developments in the Netherlands, you’ll know that Geert Wilders, a Dutch Member of Parliament, is to be put on trial for offending Muslims. “Look at what you’re doing,” the sardonic Brit Pat Condell pointed out. “You’re prosecuting a man who is under 24-hour protection from attack by violent Muslims. Yet he’s the criminal for expressing an opinion.” 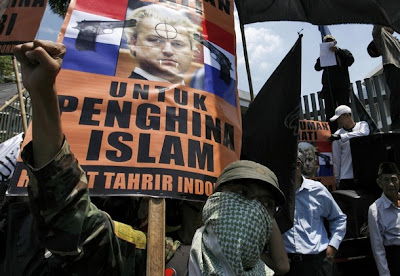 A hardline Muslim youth shouts slogans in front of a poster of Geert Wilders during a rally outside the Dutch Embassy in Jakarta April 1, 2008. Indonesia's president urged his predominantly Muslim nation on Monday not to use violence in protests at a film on Islam by Dutch lawmaker Wilders, and said world leaders had a moral responsibility to take action. The poster reads, "Death sentence for insulting Islam". (Reuters)

Quite. But, while Europe has a high degree of tolerance for intolerant imams, it won’t tolerate anyone pointing out that intolerance. It is not necessary for Minheer Wilders to be either jailed or forced into exile to conclude that the Netherlands, like many of its neighbors, has already conceded the key point - that Muslims now have the exclusive right to set the parameters of public debate on Islam. And, given that they don’t regard it as debatable at all, that means that the remorseless Islamization of Europe will continue and accelerate while the deWildered political establishment stands mute.

When I talk like that, I’m assumed to be nuts – or, to use the preferred term, “alarmist” (The Economist et al). Brian Barrington, a Dublin blogger, recently concluded a review of my book by asking:

Is Mark Steyn a scaremongering fool indulging in Islamophobic fantasies..?

Answer: yes he is.

Here’s a 2008 headline from Le Figaro re demographic trends in Brussels:

For those who haven’t taken up President Obama’s urgings to learn another language, that’s French for “Nothing to see here, folks.”

Now here’s a 2009 headline from The Times of London

A little bit harder for that one to get lost in translation. According to the United Kingdom’s Office of National Statistics, the greatest number of “Christians” (whatever that means in a contemporary Anglican context) is to be found among the over-70s, and the largest number of Muslims is in the cohort aged four and under. Which is Britain’s past and which Britain’s future? No need to ask a “scaremongering fool”. In a land where the head of state is also Supreme Governor of the established church, a quarter of all public elementary schools in England are what are known as “Church of England schools”. In practice, they cannot teach Christianity because many of them, especially in the inner cities, are now overwhelmingly Muslim. In the Blackburn and Dewsbury C-of-E schools, every single pupil is Muslim. At others, the retreating Christian community can still muster up to one per cent of the enrolment. In Bradford, the Church is building a new school for what will be an entirely Muslim student body. “Demographics change,” says the Venerable Peter Ballard, Archdeacon of Lancaster. “There was certainly a Christian population there at one time and, who knows, 20 years from now the Christians might be back.”

Not in 20 years. According to official statistics, of “white British Christian” households 16 per cent have two or more dependent children; among the UK’s “Pakistani Muslim” households, the figure is 50 per cent; “Bangladeshi Muslims”, 58 per cent. The British Government “sustainable development chair” (whatever that is) Sir Jonathon Porritt has just announced that he thinks parents are being “environmentally irresponsible” if they have more than two children.

So Britain and Europe are becoming more Muslim. The only question is how much more, how fast. And in that respect I think the only thing I got wrong in America Alone is that I was insufficiently “alarmist”. I’ll bet that “la capitale européenne sera musulmane” a lot sooner than 20 years.

Islam is not a race: As The Times reported, “Experts said that the increase was attributable to immigration, a higher birthrate and conversions to Islam.” That last category is the next stage. Like many readers, I’ve been enjoying Robert Ferrigno’s Prayers For The Assassin trilogy, set in an Islamic Republic of America a decade or three hence, while being just a wee bit skeptical about the premise – that a nuclear catastrophe would prompt millions of Americans to convert to Islam. But in Europe? There’s no need for nukes, just the quiet, remorseless daily reality.

In the next few years, Brussels, Antwerp, Amsterdam, Rotterdam will become majority Muslim. Let’s say you work in an office in those cities: One day they install a Muslim prayer room, and a few folks head off at the designated time, while the rest of you get on with what passes for work in the EU. A couple of years go by, and it’s now a few more folks scooting off to the prayer room. Then it’s a majority. And the ones who don’t are beginning to feel a bit awkward about being left behind.

What do you do? The future showed up a lot sooner than you thought. If you were a fundamentalist Christian like those wackjob Yanks, signing on to Islam might (pace Mr Ferrigno) cause you some discomfort. But, if you’re the average post-Christian Eurosecularist, what’s the big deal? Who wants to be the last guy sitting in the office sharpening his pencil during morning prayers?

Funny how quickly it all happened. There was the woman on reception, but she retired. And the guy in personnel who used to say, sotto voce, that Geert Wilders had a point. But he emigrated the year after Wilders did.
Posted by jtf at 4:20 PM