The Deceits of Bridges TV

On the occasion of its launch in 2004 from near Buffalo, New York, the Muslim television channel "Bridges TV" won the enthusiastic support of Secretary of State Colin Powell's media assistant, Stuart Holliday: "I laud your expression of interest in promoting understanding and tolerance." And so it went; Bridges TV also met with euphoric media coverage, uncritical academic reaction, and blessings from sports giants like Muhammad Ali and Hakeem Olajuwan.

From the start, however, Bridges TV amounted to a lie.

On the political level, its raison d'être was based on the canard that Muslims in the United States suffer from bias and are victimized. That an idea took formal expression in 2000, when the Senate passed a resolution inveighing against the "discrimination" and "backlash" suffered by the American Muslim community, an insulting falsehood then and now.

On the ideological level, Bridges TV was a fraud, pretending to be moderate when it was just another member of the "Wahhabi lobby." Endorsed by some of the worst Islamist functionaries in the country (Nihad Awad, Ibrahim Hooper, Iqbal Yunus, Louay Safi), it was an extremist wolf disguised in moderate sheep's clothing.

On the financial level, Bridges TV marketed itself to investors on the basis of an imaginary population of 7-7.4 million U.S. Muslims, or 2-3 times the actual total, making the station commercially unviable from day one.

Finally, on the familial level, Bridges TV pretended to be based on what critic Zuhdi Jasser calls the "public marital partnership" of the station's first couple; Muzzammil ("Mo") Hassan proudly related how his wife Aasiya Z. Hassan spurred him to create Bridges TV. He was the hard-charging founder responsible for finances and marketing; she expressed her devotion to Islamic ideals and culture as the station's program director.

In fact, reports Aasiya's divorce attorney, the couple had "physical confrontations off and on" during their entire eight-year marriage and these recently escalated to Muzzammil issuing death threats. Salma Zubair, who says she is Aasiya's sister, writes that Aasiya "lived her 8 years of married life with fear."

Aasiya began divorce proceedings on the grounds of "cruel and inhuman treatment" and won an "Order of Protection" on Feb. 6 to force Muzzammil out of their shared house, enraging him; according to the local police chief, Muzzammil "came back to the residence and was pounding on doors and broke one window." 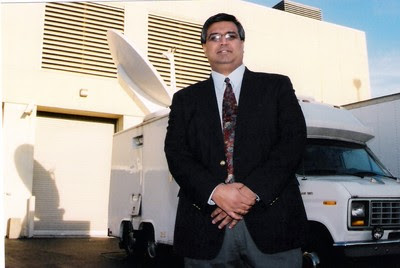 On Feb. 12, the couple encountered each other at the television studio. At 6:20 p.m., Muzzammil went to the police and directed them where to find his wife's corpse. Officers found her body at the station in a hallway, decapitated and with multiple stab wounds. Detectives charged Muzzammil with murder and are looking for knife used to kill her.

A reliable source informs me – and this is breaking news – that the police found Muzzammil repeatedly told his wife that she had no right, under Islamic law, to divorce him. They also quote him stating that Aasiya, because beheaded, cannot reach paradise.

Muzzammil's defense lawyer says his client will plead not guilty, presumably by reason of insanity.

A great battle looms ahead on how to interpret this crime, whether as domestic violence or honor killing. Supna Zaidi of Islamist Watch defines the latter as "the murder of a girl or woman who has allegedly committed an act that has shamed and embarrassed her family." Deeply alien to Westerners, this motive has paramount importance in traditional Muslim life.

In a Middle East Quarterly article, "Are Honor Killings Simply Domestic Violence?" feminist theorist Phyllis Chesler delineates eight differences between these two concepts, including the identities of perpetrator and victim, the circumstances of the murder, the degree of gratuitous violence, the killer's state of mind, and family responses.

Did Aasiya die in a crime of passion or to reinstate a family's reputation? Was the violence generic or specifically Muslim? The Islamic Society of North America opts for domestic violence while the National Organization for Women's New York State chapter sees an honor killing.

The crime at Bridges TV fits neither model exactly, suggesting we need more information to determine its exact nature. But as the forces of political correctness inevitably bear down to exclude an Islamic dimension to the murder, the motive of family reputation must be kept alive. Enough with the pleasant deceits – time has come to utter hard truths about Bridges TV.

Mr. Pipes (www.DanielPipes.org) is director of the Middle East Forum and Taube distinguished visiting fellow at the Hoover Institution of Stanford University.
Posted by jtf at 12:12 PM

Email ThisBlogThis!Share to TwitterShare to FacebookShare to Pinterest
Labels: Daniel Pipes, Islam and The West