A-Rod's only latest high-priced 'hero' to be an embarrassment 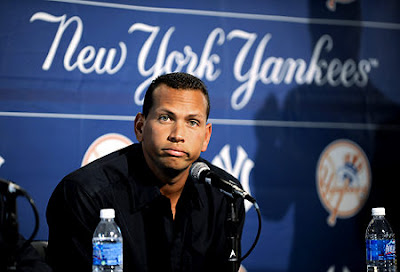 Alex Rodriguez is just one of many recent New York athletes to shame the city ...

We like to think we do everything bigger and better here, especially in sports. But lately it seems as if the only place we've cornered the market in sports is with the biggest pinheads.

Alex Rodriguez is the current captain of this. Yankee fans still want the Yankees to be Derek Jeter and Mariano Rivera and Jorge Posada. Yankee fans just want to root for their team the way they did when Joe Torre was the manager and the Yankees won the World Series every year.

But now Rodriguez keeps getting in the way. To root for their team, Yankee fans have to root for A-Rod, who doesn't just admit to using steroids but then answers questions about that as well as he hits in the playoffs.

Rodriguez is supposed to hit 800 home runs in the big leagues before he is through, hit more than Babe Ruth or Henry Aaron or Barry Bonds, and guess what? The Yankees would have to pick up half his salary, or more, to get rid of him.

This isn't sports the way anybody really wants it to be in New York. It is just the way things are. 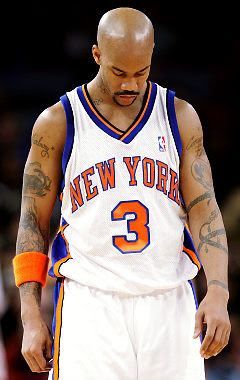 Keivom/News
... as Stephon Marbury's misdeeds keep him off the court at the Garden ...

The truly amazing thing is that guys like A-Rod expect people to go back to rooting for them no matter what they've done or how pathetically they've explained themselves - or even how much they've lied - as long as they produce.

Jason Giambi was the first to crack that code, at least where steroids were concerned. When it came out that he'd used them, Giambi apologized for nothing and signed a lot of autographs and found out you could get by giving the fans crumbs. Now Rodriguez tries to use the same game plan.

It is not just A-Rod, of course, and not just the Yankees.

The football Giants had a chance to do something no New York football team had ever done, win back-to-back titles and in the process be called the best New York football team of them all. Then Plaxico Burress went out one Friday night with an unlicensed and loaded handgun, did that in the city of New York, and before the night was over he had shot himself in the leg and blown up his team's season in the process.

So if we are doing some red-carpet for pinheads these days, Burress goes in there with A-Rod. And the best part with Burress? Before he even finds out if he can beat a rap like this, and before he even tries to get by with the kinds of apologies that A-Rod has been offering once a week, his agent actually thinks he can start shopping for interest from other teams, at least before the Giants tell him to stop.

If Burress thinks it will help him get over with the fans, if he thinks it's the best way to protect his money and whatever future he has in the NFL, he will offer some kind of lame apology later. Say he only had the gun because he didn't feel safe. So hire a bodyguard or stay home. 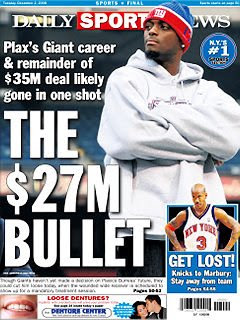 Daily News
... while Plaxico Burress' antics kept him on the back page in November and December.

Stephon Marbury is a little different. He's never really apologized for anything, not even his performance during Anucha Browne Sanders' sexual harassment suit against Madison Square Garden. You remember that one. Marbury became more famous for admitting to having sex with a female intern in his car than he was for anything he had ever done on the court for the Knicks.

"Are you going to get into the truck?" Marbury said to this intern and admitted that on the stand and then was famously photographed laughing off the whole thing outside the courtroom.

Marbury wasn't even on trial, Isiah Thomas and James Dolan were. Yet he became the face of that trial the way he became the face of the Knicks over time. He is a Coney Island kid out of Lincoln High, out of a proud basketball history there, and was given the keys to the Garden and the run of the place and where is he now, in what was still supposed to be the prime of his NBA career?

He is being paid $20 million NOT to play basketball for the Knicks.

A-Rod is not Burress. Burress is not Marbury. They could still be on billboards together.

By now we are all smart enough to know that being a rich and talented New York sports star does not make you a saint or some kind of hero. This goes all the way back to Babe Ruth. He was the town's biggest baseball star. Lawrence Taylor was the biggest football star, and had terrible trouble once he got away from Sunday afternoon.

Mickey Mantle was as much a hero to a generation of Yankee fans and generation of kids as anybody who has ever played here. There is as much magic to his name as there is to Ruth's. And Mantle once sat with a friend of mine in a Cooperstown bar when they were there to film a television special and said this after he'd had about 20 drinks one night: "You know I've been drunk like this pretty much for the last 25 years."

But Mantle came out of a time in sports when people didn't want to know what they didn't want to know and the media was happy not to tell them. In the end the truth about Mickey Mantle was that he only became a real hero at the end of his life, in the way that he finally stopped drinking and the way he fought cancer. That was when Mantle's legend finally caught up with the man.

A-Rod hasn't left his career in bars or strip clubs. He hasn't thrown his career away over a drug like cocaine the way Dwight Gooden and Darryl Strawberry did, helping ruin any chance the Mets of the 1980s had to be some kind of dynasty. But the two of them were addicts. With Gooden particularly, we have found out in his post-baseball years, as he lost everything and ended up in jail, just how much of an addict he really was.

Great athletes like these, because of the talent with which they've been blessed and the work they've honestly done in their lives, can make their sports look ridiculously easy. But at the same time, they make being a sports fan seem impossibly hard sometimes.

Then, when caught the way A-Rod has been caught on steroids, they often offer these pathetic imitations of true accountability and think they can turn the page because they want to.

"I've had a tough year," Alex Rodriguez says, at a time when this country sets records for foreclosures and bailouts and unemployment and economic misery.

Rodriguez doesn't get it. Burress doesn't get it. Andy Pettitte still wants us to believe he only used HGH twice. Marbury doesn't get it. Neither does Roger Clemens, who had it all here and might end up losing everything if the government can prove he lied about his own steroids use.

That truck Marbury talked about with the intern that time? Sometimes you just want to load it up with all of them.
Posted by jtf at 8:29 AM