Climate Science in A Tornado

By George F. Will
The Washington Post
Friday, February 27, 2009; Page A17
http://www.washingtonpost.com/ 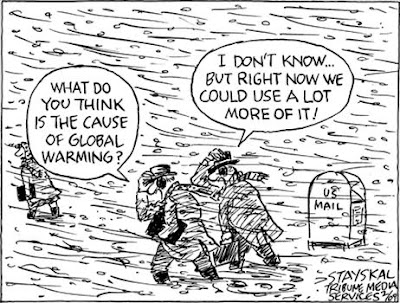 Few phenomena generate as much heat as disputes about current orthodoxies concerning global warming. This column recently reported and commented on some developments pertinent to the debate about whether global warming is occurring and what can and should be done. That column, which expressed skepticism about some emphatic proclamations by the alarmed, took a stroll down memory lane, through the debris of 1970s predictions about the near certainty of calamitous global cooling.

Concerning those predictions, the New York Times was -- as it is today in a contrary crusade -- a megaphone for the alarmed, as when (May 21, 1975) it reported that "a major cooling of the climate" was "widely considered inevitable" because it was "well established" that the Northern Hemisphere's climate "has been getting cooler since about 1950." Now the Times, a trumpet that never sounds retreat in today's war against warming, has afforded this column an opportunity to revisit another facet of this subject -- meretricious journalism in the service of dubious certitudes.

On Wednesday, the Times carried a "news analysis" -- a story in the paper's news section, but one that was not just reporting news -- accusing Al Gore and this columnist of inaccuracies. Gore can speak for himself. So can this columnist.

Reporter Andrew Revkin's story was headlined: "In Debate on Climate Change, Exaggeration Is a Common Pitfall." Regarding exaggeration, the Times knows whereof it speaks, especially when it revisits, if it ever does, its reporting on the global cooling scare of the 1970s, and its reporting and editorializing -- sometimes a distinction without a difference -- concerning today's climate controversies.

Which returns us to Revkin. In a story ostensibly about journalism, he simply asserts -- how does he know this? -- that the last decade, which passed without warming, was just "a pause in warming." His attempt to contact this writer was an e-mail sent at 5:47 p.m., a few hours before the Times began printing his story, which was not so time-sensitive -- it concerned controversies already many days running -- that it had to appear the next day. But Revkin reported that "experts said" this columnist's intervention in the climate debate was "riddled with" inaccuracies. Revkin's supposed experts might exist and might have expertise but they do not have names that Revkin wished to divulge.

As for the anonymous scientists' unspecified claims about the column's supposedly myriad inaccuracies: The column contained many factual assertions but only one has been challenged. The challenge is mistaken.

Citing data from the University of Illinois' Arctic Climate Research Center, as interpreted on Jan. 1 by Daily Tech, a technology and science news blog, the column said that since September "the increase in sea ice has been the fastest change, either up or down, since 1979, when satellite record-keeping began." According to the center, global sea ice levels at the end of 2008 were "near or slightly lower than" those of 1979. The center generally does not make its statistics available, but in a Jan. 12 statement the center confirmed that global sea ice levels were within a difference of less than 3 percent of the 1980 level.

So the column accurately reported what the center had reported. But on Feb. 15, the Sunday the column appeared, the center, then receiving many e-mail inquiries, issued a statement saying "we do not know where George Will is getting his information." The answer was: From the center, via Daily Tech. Consult the center's Web site where, on Jan. 12, the center posted the confirmation of the data that this column subsequently reported accurately.

The scientists at the Illinois center offer their statistics with responsible caveats germane to margins of error in measurements and precise seasonal comparisons of year-on-year estimates of global sea ice. Nowadays, however, scientists often find themselves enveloped in furies triggered by any expression of skepticism about the global warming consensus (which will prevail until a diametrically different consensus comes along; see the 1970s) in the media-environmental complex. Concerning which:

On Feb. 18 the U.S. National Snow and Ice Data Center reported that from early January until the middle of this month, a defective performance by satellite monitors that measure sea ice caused an underestimation of the extent of Arctic sea ice by 193,000 square miles, which is approximately the size of California. The Times ("All the news that's fit to print"), which as of this writing had not printed that story, should unleash Revkin and his unnamed experts.

georgewill@washpost.com
Posted by jtf at 8:58 AM

Email ThisBlogThis!Share to TwitterShare to FacebookShare to Pinterest
Labels: Climate Change, George Will