A Puff of Green Air

Obama’s cotton-candy approach to energy would raise costs and solve no problems. 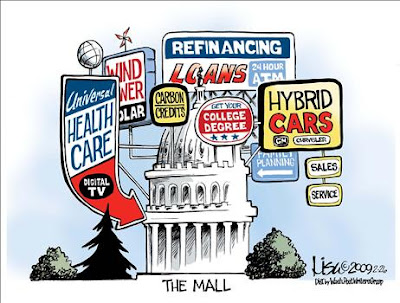 ‘The state of our economy is a concern that rises above all others,” said Pres. Barack Obama in his address to a joint session of Congress last night.

Indeed it is. So why is it that when he talked about the first of “the three areas that are absolutely critical to our economic future” and to our very “survival” — namely, energy — he invoked policies that will increase the economic burden on all Americans?

The one specific energy policy preference the president mentioned amid a haze of green generalities was a call “for Congress to send me legislation that places a market-based cap on carbon pollution.” On its face, Obama’s cap-and-trade program aims to raise costs, specifically by raising the price of energy generated from fossil fuels.

Americans use coal for half of their electricity, and natural gas for another 20 percent, precisely because these fuels produce power at a third to a fifth the cost that such celebrated green sources as wind and solar can. Think of cap-and-trade as a price-protection racket for inefficient technologies. It’s the same logic behind the renewable portfolio standard the Obama administration is pushing: A nationwide RPS would simply force energy companies to generate more power from renewable sources. Naturally, the inefficiencies get passed along to consumers, raising prices not just for electricity, but for everything.

Don’t take my word for it. Take the president’s. A year ago, during a meeting with the San Francisco Chronicle editorial board, Obama proved to be an unusually candid candidate. “Under my plan of a cap and trade system,” he said, “electricity rates would necessarily skyrocket.” Skyrocketing prices. That’s the point. (Inexplicably, the Chronicle straight-news reporters who wrote about the meeting didn’t find those eye-popping words sufficiently newsworthy to merit their publication. The comment only was discovered in the final days of the presidential campaign, by which point Obama’s victory was in the bag.)

The rest of the supposedly critical energy section of last night’s speech was filled with green fluff, and even that fluff disintegrates like cotton candy in the rain. Obama aims to “harness the power of clean, renewable energy” as the means to global supremacy, he said. He didn’t mention that there is a lot less power to be derived from clean, renewable energy sources than from those our economy prefers — renewables pack a weak punch when you consider the space they need. To generate electricity at a rate of 1,000 megawatts, as coal-fired and nuclear power plants do regularly, you need a utility-scale wind plant using 60,000 acres of land. You would need about 11,000 acres of photovoltaic cells to generate the same amount from solar energy. And don’t even get into the question of those technologies’ intermittent reliability.

Comparing fuel density provides an even better contrast. Biomass has far less energy density than other fuels. Pound for pound, coal stores twice as much energy as wood. On the same comparison, oil is twice as energy-dense as coal; it packs the same amount of energy into half the weight and space. Nuclear power, though, wins this test by a landslide. A single gram of uranium-235 packs the same punch as four tons of coal or eight tons of wood.

As much as anything, that explains our current energy economy right there. It also explains why today’s trendy green technologies can’t hope to compete without having politicians rig the market. Neither the physics nor the economics work in their favor. To hear the president tell it, however, there is only upside. He paints a picture of a future full of green jobs and clean skies.

But can we really meet a future of lower (or nonexistent) greenhouse-gas emissions while providing the supplies of energy a thriving economy will require? Not under anything Obama discussed last night. Curiously, he avoided mention of the one energy source that can provide huge volumes of power while giving off no pollution or carbon dioxide: nuclear power. It already provides a fifth of America’s electricity (wind and solar generate about one half of one percent — combined). And nuclear energy can provide steady, baseload electricity, which notoriously intermittent sources like wind and solar cannot do. Of course, many environmentalists (a crucial constituency for Obama’s Democratic party) are reflexively opposed to nuclear power, a misguided hang-up that dates back to 1960s and 1970s protests against atomic weapons.

Obama may be serious about creating millions of jobs for solar-panel installers and wind-turbine manufacturers. But that probably owes more to wanting to satisfy the demands of constituencies like organized labor. Whether Obama is truly serious about meeting America’s energy-supply challenges is another question. Until he begins to seriously discuss nuclear, one can guess that he probably is not.

— Max Schulz is a senior fellow at the Manhattan Institute.
Posted by jtf at 9:38 PM