By Charles Krauthammer
The Washington Post
Friday, February 27, 2009; A17
http://www.washingtonpost.com 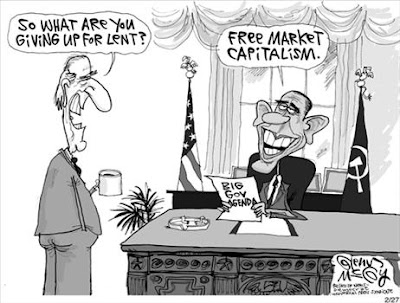 Not a great speech, but extremely consequential. If Barack Obama succeeds, his joint address to Congress will be seen as historic -- indeed as the foundational document of Obamaism. As it stands, it constitutes the boldest social democratic manifesto ever issued by a U.S. president.

The first part of the speech, justifying his economic stabilization efforts, was mere housekeeping. The economic crisis is to Obama a technocratic puzzle that needs to be solved because otherwise he loses all popular support.

Unlike most presidents, however, he doesn't covet popular support for its own sake. Some men become president to be someone, others to do something. This is what separates, say, a Bill Clinton from a Ronald Reagan. Obama, who once noted that Reagan altered the trajectory of America as Clinton had not, sees himself a Reagan.

Reagan came to office to do something: shrink government, lower taxes, rebuild American defenses. Obama made clear Tuesday night that he intends to be equally transformative. His three goals: universal health care, universal education, and a new green energy economy highly funded and regulated by government.

(1) Obama wants to be to universal health care what Lyndon Johnson was to Medicare. Obama has publicly abandoned his once-stated preference for a single-payer system as in Canada and Britain. But that is for practical reasons. In America, you can't get there from here directly.

Instead, Obama will create the middle step that will lead ultimately and inevitably to single-payer. The way to do it is to establish a reformed system that retains a private health-insurance sector but offers a new government-run plan (based on benefits open to members of Congress) so relatively attractive that people voluntarily move out of the private sector, thereby starving it. The ultimate result is a system of fully socialized medicine. This will probably not happen until long after Obama leaves office. But he will be rightly recognized as its father.

(2) Beyond cradle-to-grave health care, Obama wants cradle-to-cubicle education. He wants far more government grants, tax credits and other financial guarantees for college education -- another way station to another universal federal entitlement. He lauded the country for establishing free high school education during the Industrial Revolution; he wants to put us on the road to doing the same for college during the Information Age.

(3) Obama wants to be to green energy what John Kennedy was to the moon shot, its visionary and creator. It starts with the establishment of a government-guided, government-funded green energy sector into which the administration will pour billions of dollars from the stimulus package and billions more from budgets to come.

But just picking winners and losers is hardly sufficient for a president who sees himself as world-historical. Hence the carbon cap-and-trade system he proposed Tuesday night that will massively restructure American industry and create a highly regulated energy sector.

These revolutions in health care, education and energy are not just abstract hopes. They have already taken life in Obama's $787 billion stimulus package, a huge expansion of social spending constituting a down payment on Obama's plan for remaking the American social contract.

Obama sees the current economic crisis as an opportunity. He has said so openly. And now we know what opportunity he wants to seize. Just as the Depression created the political and psychological conditions for Franklin Roosevelt's transformation of America from laissez-faireism to the beginnings of the welfare state, the current crisis gives Obama the political space to move the still (relatively) modest American welfare state toward European-style social democracy.

In the European Union, government spending has declined slightly, from 48 percent to 47 percent of GDP during the past 10 years. In the United States, it has shot up from 34 percent to 40 percent. Part of this explosive growth in U.S. government spending reflects the emergency private-sector interventions of a Republican administration. But the clear intent was to make the massive intrusion into the private sector temporary and to retreat as quickly as possible. Obama has radically different ambitions.

The spread between Europe and America in government-controlled GDP has already shrunk from 14 percent to 7 percent. Two terms of Obamaism and the difference will be zero.

Conservatives take a dim view of the regulation-bound, economically sclerotic, socially stagnant, nanny state that is the European Union. Nonetheless, Obama is ascendant and has the personal mandate to take the country where he wishes. He has laid out boldly the Brussels-bound path he wants to take.

letters@charleskrauthammer.com
Posted by jtf at 8:54 AM