Yankees' rook gets it Wright 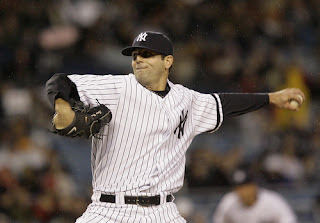 Several versions of the Yankee lineup card sat on the chair in front of Chase Wright's new locker last night, a few minutes after the Yankees beat the Indians, 10-3. In the back of the Yankee clubhouse, trainer Gene Monahan, who usually handles such things, was scrawling names and dates on game-used balls, more souvenirs.

It was heady stuff for Wright, a 24-year-old lefty who had once seemed stalled in the minors and had never thrown a pitch above Double-A before his first pitch to Grady Sizemore at 7:08 p.m. It was pretty huge for the Yankees, too, who have four starters on the disabled list. 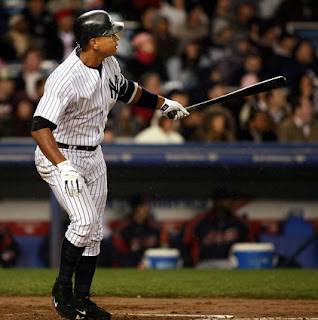 Alex Rodriguez hit his MLB-leading eighth homer of the season.

After a shaky beginning, Wright threw five semi-solid innings, getting plenty of help from his teammates, and got to walk off the mound in position to win as his father, David, beamed and snapped photos from the stands.

Afterward, Wright called it the best night of his life.

"Getting drafted by them was a pretty big thing, but I'd have to say this tops it by far," Wright said. He said the first thing he was going to do when he left the clubhouse was grab his dad, step-mom, Celeste, and brother, Chad, and "give 'em all a hug and scream a little bit."

Wright (1-0) allowed five hits and three runs, walking three and striking out three as the Yankees evened their record at 6-6. Wright grew more comfortable after the Yanks built an 8-1 lead thanks to Alex Rodriguez's eighth home run, one by Jorge Posada and one by Doug Mientkiewicz. Posada's homer was the 200th of his career and A-Rod, who has hit safely in every game this season, also had an RBI single.

Even Derek Jeter, who seemed defensively challenged after making six errors in the first 11 games, made a sparkling play, going to his left, spinning and throwing off balance to rob Victor Martinez of a hit in the third.

The first couple innings were played in a drizzle on a dreary, 48-degree night. While most everyone at the Stadium, including the 38,438 fans who braved the elements, felt chilly, Joe Torre guessed that Wright "was the only one not cold. I think he had the blood rushing."

"I was cold when I was done pitching," he said.

Wright was the Yankees' third-round pick in the 2001 draft and struggled immediately, spending six years without going past Class A. He was not even in the rotation at Class A Tampa at the start of last season, but eventually began to start and went 12-3 to lead the Florida State League with a 1.88 ERA. He was named the league's Pitcher of the Year. Entering his seventh pro season this year, Wright was ranked as the Yanks' 19th-best prospect by Baseball America's Prospect Handbook.

Wright began surging when he put together several good starts during his 2005 campaign at Class-A Charleston. "Coming out of high school, I struggled and it was hard to have confidence," Wright said. "That was the difference."

That helped him last night when he walked the first two hitters he faced. Sizemore walked on a 3-2 pitch that was close - so much so that Posada stood up to throw the ball down to third to start an around-the-horn - and then Jason Michaels got a free pass after Wright got ahead, 0-1. Some young pitchers might have collapsed, but Wright got three straight outs, with only one run scoring on a grounder.

Guidry visited after the second walk and told Wright, "It's the same game you've been playing all your life. You make good pitches, guys make outs."

"For him, that was a big inning because it could've turned a lot worse if he's not concentrating," Guidry added. "He's got a lot of poise for a young kid."

Wright gave up a homer to Travis Hafner, who hit 42 home runs last year, in the third inning and an RBI single to Andy Marte in the fourth. He came out after a scoreless fifth, having thrown 104 pitches.

"There was a lot of quality there," Torre said. "He went after people."

It's still unclear though if he'll get another start. "We'll see," Torre said. "We'll see how we're lined up. But I certainly like what I saw. We'll make that decision later."

For now, Wright was going to enjoy his first one. There were about 50 voice mails and text messages waiting for him on his cellular phone after the game. He planned to go out to eat with his family, friends and agents.