Thomas Sowell: A Trail of Slime 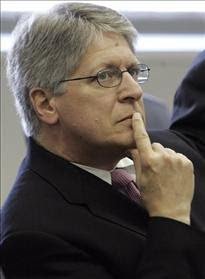 Durham County District Attorney Mike Nifong listens during a North Carolina State Bar hearing in Raleigh, N.C., Friday, April 13, 2007. A disciplinary committee rejected a request Friday to dismiss ethics charges against the former prosecutor in the Duke lacrosse case that accuse him of withholding critical DNA evidence from the defense.

District Attorney Michael Nifong has apologized to the Duke University students he indicted for rape for "judgments that ultimately proved to be incorrect."

Contrary to the fashionable phrase, "mistakes were made," there is no reason to believe that any mistake was made by District Attorney Nifong in this case, or that he misjudged anything other than miscalculating what he could get away with.

Nothing that Michael Nifong did is consistent with his ever believing that the Duke University students were guilty. If he really thought they were guilty and expected to go to trial and convict them, then the rigged photo lineup he arranged could have been enough to get the case thrown out of court.

This column predicted in April a year ago that this case would never go to trial because it was obvious even then that discovering the guilt or innocence of the accused was not District Attorney Nifong's real goal.

What served Nifong's purposes was keeping this case alive long enough for him to win his election as district attorney.

A real lineup, conducted according to well-established rules, could have revealed early on that the stripper who accused Duke lacrosse players of rape didn't have a clue who they were. That would have killed the case and destroyed Nifong's trump card -- the race card -- for winning the black vote.

The district attorney's failure to interview either the accuser or the accused for months likewise suggests someone who was more concerned with avoiding the premature collapse of his case before election time than with finding out what really happened.

Ironically, it was a black taxi driver who provided the first evidence that the charge was false. He said that one of the accused was in his cab, going to a bank, at the time the rape was supposed to have occurred.

That taxi driver was subsequently brought in for police interrogation on a wholly unrelated matter and grilled for hours before being released, without being charged with anything.

Little, if anything, was heard from that taxi driver again about the Duke rape case. Apparently he got the message.

It later turned out that a bank security camera with date and time confirmed what the taxi driver had said, since it showed one of the accused Duke students taking money out of an ATM at the time when he was supposedly committing rape.

During the current investigation of ethics charges against District Attorney Nifong by the North Carolina Bar Association, one of the things that might be well worth investigating is whether Nifong had anything to do with the harassment or intimidation of a witness whose testimony could have undermined his case.

Another damaging action that Nifong has tried to portray as an oversight on his part was failing to disclose that the DNA evidence from the panties and nearby areas of the accuser showed that a number of other men had had contact there, even though none of the Duke students' DNA was found.

It might seem plausible that a busy district attorney might have forgotten to include that. But the sworn testimony of the head of the laboratory that conducted the DNA tests is that Nifong specifically asked him not to reveal that fact.

That was not an oversight or a misjudgment. That was a deliberate attempt to suppress evidence in a felony case.

When it finally came out, months after the indictment of the Duke students, that the stripper who accused them could not even be sure that a rape had occurred -- despite her previous various accounts of rape -- only the rape charge was dropped, while other serious felonies still hung over the students' heads, based on the same unreliable accuser.

It is hard to believe that Nifong believed that these other charges would stand up in court. But they didn't have to.

After months of mounting pressure and growing legal bills, many people would have plea-bargained, "confessed" to something minor, just to get the nightmare over with.

Such a "confession" might have spared Nifong from being hauled up before the state bar association on ethics charges.

Everything in this case, from start to finish, makes perfect sense when seen as being about Nifong's career, not justice.


Thomas Sowell is a senior fellow at the Hoover Institute and author of Basic Economics: A Citizen's Guide to the Economy.
Posted by jtf at 6:35 AM