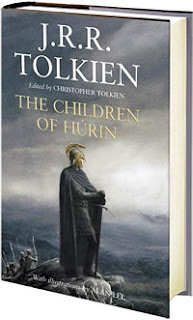 "The Children of Hurin" worthy part of Middle-earth mythology

(AP) -- Six thousand years before the Fellowship of the Ring, long before anyone had even seen a Hobbit, the elves and men of Middle-earth quaked at the power of the dark lord Morgoth.

Hunted by easterlings and orcs, they fled to the fastness of Nargothrond and to the deep forests of Brethil and Doriath. Among them, a hero emerged. Strong and courageous he was, but foolhardy and impetuous. His name was Turin, son of Hurin.

His story, released today by Houghton Mifflin, is a publishing event: It is the first new book by the creator of "The Lord of the Rings" in 30 years. The publisher calls it the culmination of an effort to bring to the public the vast body of work J.R.R. Tolkien had left unpublished, and largely unfinished, when he died in 1973.

Tolkien began writing "The Children of Hurin" 99 years ago, abandoning it and taking it up again repeatedly throughout his life. Versions of the tale already have appeared in "The Silmarillion," "Unfinished Tales" and as narrative poems or prose sections of the "History of Middle-earth" series.

But they were truncated and contradictory. Outside of Tolkien scholars and Middle-earth fanatics, few read them.

These works were, after all, largely unreadable -- dense, hard to follow histories and legends of Tolkien's vast, imaginary world, crammed with complicated genealogies, unfamiliar geography and hard-to-pronounce names. Readers who took up such books hoping for another Rings saga or charming yarn such as "The Hobbit" abandoned them after a few pages.

"The Children of Hurin" is the book for which these readers have been longing.

It is the fruit of 30 years labor by Christopher Tolkien, the author's son, who has devoted much of his life to editing and publishing the work his father left behind. By meticulously combining and editing the many published and unpublished versions of the tale, he has produced at last a coherent, vivid and readable narrative.

Houghton-Mifflin has treated the work well, hiring Alan Lee, who won an Academy Award for art direction for "The Lord of The Rings: The Return of the King," to create stunning color illustrations.

The story unfolds in a region far to the west of where Frodo and Samwise would later roam, in a land destined to be swallowed by the sea in the cataclysm that would end the first age of Middle-earth. But even then, it was an ancient land, filled with legends and half-remembered histories.

As the tale begins, Morgoth has destroyed a vast army of elves and men and taken one of its leaders, Hurin, prisoner. The dark lord tries to bend Hurin to his will, but the great man defies him. So Morgoth pronounces a curse on Hurin's children, Turin and his sister Nienor.

The first chapter resembles "The Silmarillion," dense and confusing enough to discourage casual readers. But stick with it and the story soon becomes readable and engaging.

Don't expect an uplifting ending like the one to "The Lord of the Rings," however. This is a gloomy tale -- Hurin's children doomed to failure by Turin's hubris and, of course, the curse.

The story is told in the archaic style to which Tolkien fans are accustomed, from a man who admired old Anglo-Saxon and Norse sagas. A sample:

"In this way, before the summer had passed, the following of Turin had swelled to a great force, and the power of Angband was thrown back. Word of this came even to Nargothrond, and many there grew restless."

The story is short by the standards of "The Lord of the Ring," covering just 259 pages, the rest of the book consisting of an introduction and appendix in which Christopher Tolkien explains how he went about his work. The details are unlikely to be of interest to the casual reader, but the bottom line is this:

Christopher Tolkien says that in reconciling the various versions of his father's story, he added no new material, save for an occasional transition. The words, he says, are virtually all his father's.
Posted by jtf at 7:47 AM