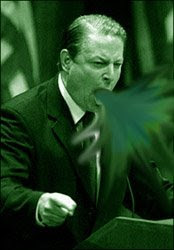 [Normally I don't use a picture on this site more than once but this one is a personal favorite. - jtf]

STEVE HAYWARD is no Al Gore. The former vice president's film about global warming, An Inconvenient Truth, delighted environmentalists and won an Academy Award. Hayward's rebuttal of Gore's warning about a coming climate catastrophe won't thrill either the environmental crowd or Hollywood's liberal elite. And you won't find his film, "An Inconvenient Truth or Convenient Fiction," in 600 movie theaters either, as Gore's was last summer. To see Hayward's 50-minute film, your best bet is to go to the website, aconvenientfiction.com. It is well worth watching, maybe more than once.

Hayward, as a global warming skeptic, has an advantage over Gore. Unlike Gore, he is calm and reasonable, avoids hyperbole, and sticks to the facts, some of which are confusing or contradictory. The result is that he is closer to what he calls "the general consensus" among scientists about global warming than Gore is.

It's important to note than Hayward, a resident scholar at the American Enterprise Institute, is not a global warming denier. "Much of what Vice President Gore says about climate change is correct," Hayward says in the film. "The planet is warming. Human beings are playing a substantial role in that warming." Beyond that, however, he disagrees sharply with Gore.

"The problem with Vice President Gore and other global warming extremists is that they distort the science, grossly exaggerate the risks, argue that anyone who disagrees with them is corrupt, and suggest that solutions are easy and cheap," Hayward says. "And that's an all too convenient fiction."

Hayward uses the same rhetorical devises as Gore. His film is basically a lecture with graphs and maps and pictures. Sponsored by the Pacific Research Institute, it cost less than $30,000 to produce. As Gore did, Hayward chats with the viewer while driving a car and walking through the woods. All this seems to work. Hayward holds your attention for his entire presentation.
His purpose is to shoot down Gore's "extreme claims" and the important facts he leaves out. For instance, Gore points to the melting ice sheets in Antarctica and Greenland. Hayward notes what Gore omitted: that while the ice in both places is melting in some locations, it is growing in others. In another case, Gore says the ice on Mt. Kilminjaro in Tanzania is melting so fast it will be gone in a few decades. In response, Hayward says this may be true, but it's not because of global warming but is due to land use and deforestation around the mountain that has "made it drier on top."

Hayward insists we can deal with environmental problems without drastically changing how we live. His example: Los Angeles. When he grew up there, it was smog-bound. Since then, the population has doubled, the number of automobiles has tripled, yet the level of smog has been reduced by 75 percent. "In most areas, not all areas, environmental quality in the U.S. is improving rapidly," he says.

One more telling item: the Kyoto treaty. Two Princeton professors have suggested seven different steps--or wedges, as they call them--to meet Kyoto's goals for cutting greenhouse gases. Gore adopts these steps in his film, minus one of them--more nuclear power. This omission is "a case of environmental correctness right out of the '70s," Hayward says.

If some of Hayward's case sounds too technical or academic, it's not really. Hayward makes it simple to understand. What's especially significant is that he doesn't cite only the science that suits his purposes. Conclusions about global warming are all over the lot, he notes, and "you can get whiplash following the science on this." His point is that the science on global warming is not settled, as Gore and his allies claim.

As it turns out, most of those making the wildest claims about global warming aren't scientists at all, Hayward says. Instead, they tend to be "politicians, headline-seeking journalists, environmentalist, and windy Anglican bishops who can't understand why people aren't coming to church any more on Sunday."

The environment, Hayward concludes, "is much too important to be left to environmentalists."

Or to Al Gore.

Fred Barnes is executive editor of THE WEEKLY STANDARD.