A-Rod on A-Tear as Yanks cruise 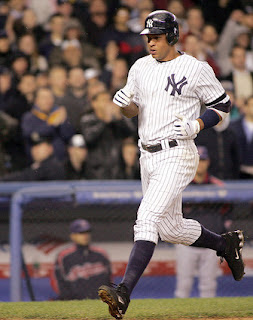 Alex Rodriguez stood near the bat rack in the sixth inning, jawing excitedly with Derek Jeter and hitting coach Kevin Long, dissecting the soaring line-drive homer Rodriguez had hit moments before. In the stands, fans were imploring Rodriguez to come out for a curtain call, but he lingered, soaking it all in.

It's a good time to be a Yankee, what with the way they've played the last two nights after the beginning of their season was marred by injuries to four starting pitchers, some fielding deficiencies and a struggle to get over the break-even mark.

Everything, from their resident enigma, Rodriguez, the hottest hitter in baseball, to their pitching to their power has bloomed for the Yankees in the last two days, most recently last night when Kei Igawa got his first big-league victory and A-Rod and Jason Giambi slugged back-to-back homers in a 9-2 victory over the Indians. 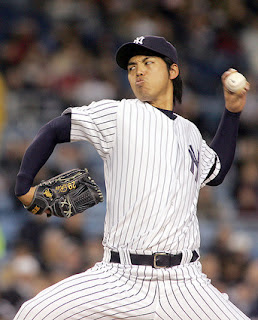 With their rotation hobbled, the Yanks have gotten a solid start from a Double-A pitcher, Chase Wright, on Tuesday and a terrific one last night from Igawa, who allowed two runs and five hits in six innings, striking out five and walking one in front of 41,379 at the Stadium. Their bullpen has thrown seven straight scoreless innings since Mariano Rivera blew a save Sunday and it leads all pens with a .147 batting average against.

Heck, even some of their injured players (Chien-Ming Wang, Hideki Matsui, Jeff Karstens) are close to returning.

Last night, Rodriguez's power show was simply the sizzle in the Yanks' explosion, his ninth homer in just 13 games. The Yanks, who had 14 hits, took command in the third when they scored five times on seven hits. Every starter had at least one hit. Jeter went 3-for-4 with two doubles and Bobby Abreu, Giambi and Josh Phelps had two hits apiece. "It's good to see things start clicking," Giambi said.

Above everyone else, Rodriguez is clicking. He is tied with Albert Pujols and Chris Shelton as the fourth-fastest to reach nine homers - Pujols and Shelton did it last year. Only Mike Schmidt (10 games in 1976), Luis Gonzalez (10 games in 2001) and Larry Walker (12 games in 1997) have reached nine faster.

Rodriguez, who is batting .365 with a .981 slugging percentage and 23 RBI, has an extra-base hit in every game but one and he and the Mets' David Wright are the only players with hits in each game this year.

They seem to be grinning at about the same rate, too. Rodriguez said he hasn't smiled this much, "probably since my daughter was born" and added that even when he makes an out, "I know exactly what to do to fix it."

"He's unbelievable," Jeter said. "Everything he hits is a home run. He hit one out with one hand. I can't relate to it because I can't do it. He's as hot as I've seen a player. All he has to do is make contact and it goes out." 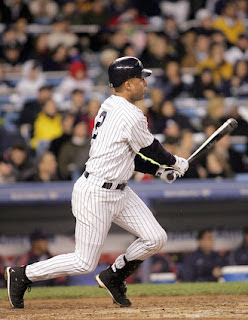 Derek Jeter doubles to start off the third inning. Jeter upped his average to .333 with a 3-4 performance.

Jeter and several other Yankees were ribbing Rodriguez near the bat rack because A-Rod had reached out for a pitch in the dirt and still drilled it over the left-field fence. "There was some other stuff, but that was the premise," Jeter said.

After his homer, Rodriguez gabbed for several seconds before mounting the dugout steps and waving to cheering fans. It seems like Rodriguez's relationship with fans has changed completely this season - he wasn't even booed when he started last night 0-for-3 with two whiffs and stranded a runner at third. Last year, he would've been ridiculed throughout the night. "He's endured a lot," Torre said. "It's sort of nice to see him leave a man at third and no one ask about it."

When someone said to Rodriguez that fans seemed to be giving him a break, he replied, "I haven't noticed. It's been fun ... I'm just trying to enjoy myself, regardless of what happens. Sometimes you try to manipulate things, but this game is just too hard."

Except - for now, anyway - the Yankees are making it look easy.
Posted by jtf at 1:48 PM