George Will: Taking a Bat to Prejudice 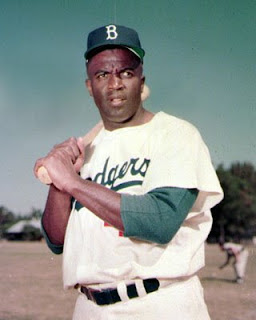 Like many New Yorkers leaving home for work on April 15, 1947, he wore a suit, tie and camel-hair overcoat as he headed for the subway. To his wife he said, "Just in case you have trouble picking me out, I'll be wearing number 42."

No one had trouble spotting the black man in the Dodgers' white home uniform when he trotted out to play first base at Ebbets Field. Suddenly, only 399, not 400, major league players were white. Which is why 42 is the only number permanently retired by every team.

Jackie Robinson's high school teachers suggested a career in gardening. Robinson's brother Mack had finished second to Jesse Owens in the 200-meter dash at the 1936 Berlin Olympics. Whites who won medals found careers opened for them. Mack, writes Jonathan Eig in " Opening Day: The Story of Jackie Robinson's First Season," wore his Olympic jacket as a Pasadena, Calif., street sweeper, while Owens found himself racing against horses at county fairs, "one small step removed from a circus act."

To appreciate how far the nation has come, propelled by what began 60 years ago today, consider not the invectives that Robinson heard from opponents' dugouts and fans but the way he had been praised. "Dusky Jack Robinson," as the Los Angeles Times called him, alerting readers to the race of UCLA's four-sport star, ran with a football "like it was a watermelon and the guy who owned it was after him with a shotgun."

That cringe-inducing fact is from Eig's mind-opening book, an account of a 28-year-old man "filled with fear and fury" and terribly alone. It includes unfamiliar details about familiar episodes. There is Lt. Robinson's 1944 refusal, 11 years before Rosa Parks, to move to the back of a bus at Fort Hood, Tex. And shortstop Pee Wee Reese, a Kentuckian who until 1947 had never shaken hands with a black person, crossing the infield to put a hand on Robinson's shoulder when Cincinnati fans were being abusive.

But Eig is especially informative about the dynamics among the Dodgers, who, like many teams, had a Southern tinge. The most popular player was nicknamed Dixie (Walker) and one of the best pitchers was the grandson of a Confederate soldier. The Dodgers' radio broadcaster, Red Barber, a Mississippian, considered resigning, then thought better. Radio presented Robinson as television cameras could not have -- as, Eig shrewdly writes, "all action," undifferentiated by visual differences from his teammates. 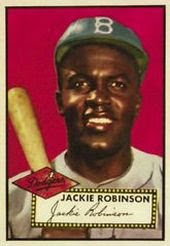 After the opening two games against the Boston Braves, the Dodgers played the Giants at the Polo Grounds in Harlem. The president of the National League, fearing excessive enthusiasm, suggested that Robinson should develop a sprained ankle. He did not, and the crowds were large, dressed as if for church -- men in suits and hats, women in dresses -- and decorous. Soon a commentator wrote, "Like plastics and penicillin, it seems like Jackie is here to stay."

The Dodgers were not. Ebbets Field's turnstiles clicked 1.8 million times in 1947, more than they ever had before or would again. But in 1947, in a Long Island potato field, Levittown was founded, offering mass-produced, low-cost housing emblematic of postwar suburbanization. Dodger fans were moving east on the island. After the 1957 season, the Dodgers moved west. 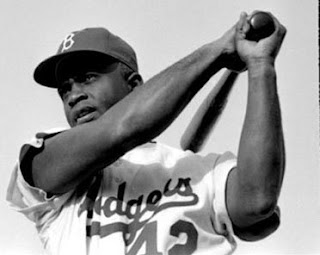 By 1956, Robinson's last season, he had lost his second-base position to Jim Gilliam, a black man. Robinson died of diabetes-related illnesses in 1972, at 53, the same age Babe Ruth was when he died. Ruth reshaped baseball; Robinson's life still reverberates through all of American life. As Martin Luther King Jr., who was 18 in 1947, was to say, Robinson was "a sit-inner before sit-ins, a freedom rider before freedom rides."

Jack Roosevelt Robinson's middle name was homage to the president who said "speak softly and carry a big stick." Robinson's deeds spoke loudly. His stick weighed 34 ounces, which was enough.

georgewill@washpost.com
Posted by jtf at 8:21 AM

Email ThisBlogThis!Share to TwitterShare to FacebookShare to Pinterest
Labels: Baseball, George Will