Cathy Young: A rush to injustice in the Duke 'rape' case 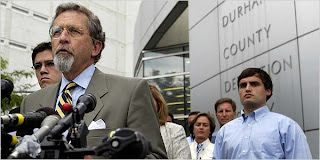 David Evans (far right) became the third lacrosse player to be indicted on May 15, 2006.

In May 2006, the women's lacrosse team at Duke University announced their intention to wear sweatbands with the word "innocent" for a Final Four game at Boston University's Nickerson Field. This gesture was a clear statement of support for the three Duke lacrosse players accused of sexually assaulting an exotic dancer at a team party. In response, New York Times sports columnist Harvey Araton suggested that "cross-team friendship" had overridden the women's common sense. In the online magazine Salon, writer Kevin Sweeney chided them for lack of solidarity with rape victims.

Now, it looks like the women's lacrosse team had it right. Last week, North Carolina attorney general Roy Cooper dismissed all charges against the Duke Three. He also explicitly stated that the men were innocent and that no attack had occurred. It's as full a vindication as the justice system can give.

Cooper described the case against the men as the result of "a tragic rush to accuse." This rush came not only from prosecutor Mike Nifong, who now faces serious charges of misconduct, but also from the media, the academic community at Duke, and feminist advocates for rape victims.

As writer Charlotte Allen has documented in The Weekly Standard, academics were quick to tailor the still-unfolding case to a narrative of sexual abuse of a downtrodden black woman at the hands of privileged white males -- males who, in the words of Duke literature professor Wahneema Lubiano, represented "the politically dominant race and ethnicity [and] the dominant gender." Much of the media echoed this narrative, albeit in more readable form.

Yet serious doubts about the accuser's credibility existed from the very beginning. Her story kept changing, even on such significant details as how many players assaulted her. The material evidence did not corroborate her charges and in some instances contradicted them. The other stripper who was at the party said that she did not believe the woman was raped.

But many people wouldn't let the facts get in the way of a good crusade. Eighty-eight Duke faculty members signed a statement, drafted by Lubiano, that expressed solidarity with the students who rallied against the accused. Its language was drenched in a presumption of guilt.

On a national level, one leader of this crusade was Wendy Murphy, a Boston-based former sex crimes prosecutor and an adjunct professor at the New England School of Law. Murphy, a frequent cable news commentator, is a foremost champion of the dogma that women who accuse men of rape always tell the truth. In one discussion on MSNBC, she proclaimed, "I have never, ever met a false rape claim. . . . My own statistics speak to the truth." 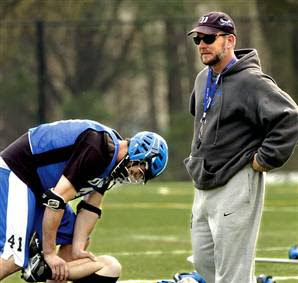 
Whatever Murphy's "truth" may be, her television appearances on the Duke case became a gold mine of disinformation. Among other things, she falsely asserted that there had been allegations of other sexual offenses involving the accused men, that the woman was violated with a broomstick and had tears in her genital area, and that the defendants had refused to cooperate with the police. She also speculated, without evidence, that photographs might exist of the actual assault and that the victim probably had traces of a date-rape drug in her blood. On several occasions, Murphy also derided the principle of the presumption of innocence, except as narrowly applied in the courtroom.

Unfortunately, Murphy's views are not unique among feminists. In January, when the most serious charges had already been dismissed, Gail Dines, a professor at Wheelock College in Boston, wrote an online article criticizing CNN for airing a special sympathetic to the accused. Citing Murphy as her source, she asserted that prosecution still had a strong case. She voiced "anger at the way the media humanized these men as victims and dehumanized the woman as the perpetrator of a lie."

In fact, it's about time we humanized men who are victims of false accusations of rape. Feminism has made great strides in bringing attention to the tragedy of rape and the pain of its victims. Now, the Duke case may bring much-needed focus to the tragedy of false accusations. It is not anti female to say that some women do lie about rape -- any more than it is anti male to say that some men rape women. The vindication of the Duke Three may in the end be a victory for true gender equity.

Cathy Young is a writer for Reason Magazine.
Posted by jtf at 7:07 AM