Partial Reversal: Yesterday's abortion ruling was only a baby step.

To hear the extremes of the abortion debate tell it, yesterday's Supreme Court ruling in Gonzales v. Carhart is the beginning of the end of abortion rights in America. The Christian Coalition declared that "it is just a matter of time" before Roe v. Wade "will also be struck down by the court," while Senator Hillary Clinton called it "a dramatic departure from four decades of Supreme Court rulings that upheld a woman's right to choose."

They're both wrong, but the dueling end-of-days rhetoric shows again how much the Supremes have polarized our abortion debate. In fact, yesterday's 5-4 ruling is narrowly drawn and upholds a federal law that outlaws only a single, late-term procedure that Daniel Patrick Moynihan once described as "infanticide."

Not only did the Court not overrule its Roe and Casey decisions, it didn't even overrule Stenberg v. Carhart, the 2000 decision that overturned a Nebraska law banning partial-birth abortion. Instead, Justice Anthony Kennedy upheld the 2003 Congressional ban because he said it was more narrowly drawn. "The Act makes the distinction the Nebraska statute failed to draw," he wrote, "by differentiating between the overall partial-birth abortion and the distinct overt act that kills the fetus." 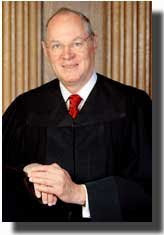 To be more precise, "The fatal overt act must occur after delivery to an anatomical landmark"--i.e., a fetal body part--and it must not be part of the actual delivery of a baby. We recommend Justice Kennedy's opinion to readers who want to learn the grisly details of what partial-birth abortion actually involves. But the main distinction Mr. Kennedy draws is between an abortion procedure that takes place entirely in the womb and one that first withdraws the fetus part-way before killing it.

The gruesome nature of the procedure explains why the partial-birth ban passed Congress with large bipartisan majorities. Sixteen Senate Democrats, including former Majority Leader Tom Daschle, voted for the ban, along with 63 House Democrats. Polls show that two-thirds of Americans support banning these abortions.
Challengers, led by Planned Parenthood, claimed the law was unconstitutional because it lacked a "health exception" for the mother and defined the banned procedure too broadly. But the majority--which included President Bush's two appointees, Chief Justice John Roberts and Justice Samuel Alito--rejected those arguments as failing to impose an "undue burden" on a woman's right to an abortion.

The Partial Birth Abortion Ban Act, by the way, provides an exemption for when the mother's life is endangered. Abortion proponents wanted a "health exception" as well, because in legal practice that has become a loophole allowing just about any abortion right up until actual birth. A doctor could consider such things as mental anxiety and even financial strain as justifying a "health exception."

As a practical matter, this ruling sends the abortion debate back to the states. Some may reintroduce their partial-birth bans to conform to the 2003 federal law. This is all to the good, since we think the best place to settle abortion disputes is in state legislatures, where a political consensus that better reflects public opinion can be struck.

Americans are ambivalent about abortion, with a majority wanting it to be legal but also rarer than it is now. The tragedy of Roe, Casey and Stenberg is that they pre-empted that debate, leaving the controversy only to the extremes on both sides. We'd like to see the High Court repeal those decisions, sending the entire issue back to the states, where we'd guess most would allow liberal abortion rights, albeit more restricted than today.

But based on yesterday's ruling, no one should expect such an outcome from the current Court. Justice Kennedy had been a dissenter in Stenberg, so changing his position would have been a little too protean even for him. The fact that he wasn't willing to overturn even Stenberg suggests that this Court is not in the mood for sweeping reversals of precedent. As for Messrs. Roberts and Alito, the Court's opinion also gives no clue about how many abortion precedents they might be willing to overturn. The Court has shown a very modest new deference to the will of the voters on abortion, but no more.
Posted by jtf at 6:56 AM