Tricky Steps From Boy to Superstar

Which Michael Jackson will be remembered? The unsurpassed entertainer, the gifted and driven song-and-dance man who wielded rhythm, melody, texture and image to create and promote the best-selling album of all time, “Thriller”? Or the bizarre figure he became after he failed in his stated ambition to outsell “Thriller,” and after the gleaming fantasy gave way to tabloid revelations, bitter rejoinders and the long public silence he was scheduled to break next month?

In the end, the superstar and the recluse were not so far apart. 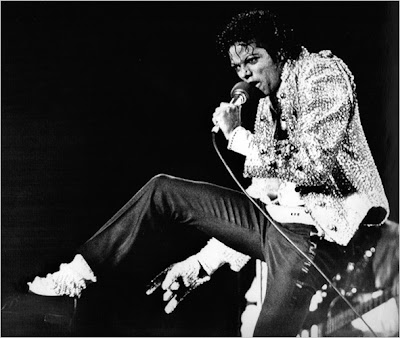 Mr. Jackson sang and danced with his brothers at Rich Stadium in Buffalo in August 1984.
Photo: Associated Press

Mr. Jackson built his stardom on paradox. As a child star he was precocious; as an adult he was childlike. His only competition was himself. Within the razzle-dazzle of his songs, he sang about fears and uncertainties in that high, vulnerable voice: flinching from monsters in “Thriller,” wishing he could just “Beat It” when trouble began.

He was a racial paradox, too: an African-American whose audience was never segregated, but whose features grew more Caucasian and whose skin grew lighter through his career, to discomfiting effect. His own face had become a mask.

All of Mr. Jackson’s show-business skills — the ones he learned under his father’s sometimes brutal instruction and then within the Motown Records hitmaking assembly line — were at once a way to please the broadest possible audience and to shield himself from them, safe within his own spectacle.

Despite all his time onstage and on the air, Mr. Jackson stayed remote: styled, rehearsed and choreographed. He had one of history’s largest audiences, and it never really knew him.

There was no denying his talent. His voice leaped out of the radio in Jackson 5 songs like “I Want You Back,” even for those who didn’t see how he danced on television. He internalized Motown’s philosophy of making music for a broad audience — not just a black or white audience as pop grew increasingly segmented in the 1970s — and when he took over his own career, with “Off the Wall” in 1979, he applied that philosophy to the newest sounds he could find, in and out of discos.

His ambition was seductive when he urged “Don’t Stop ’Til You Get Enough.” He offered something to everybody on “Thriller,” which may have been the most strategic crossover album to date: a duet with a Beatle in “The Girl Is Mine,” dizzying electronic beats in “Wanna Be Startin’ Somethin’,” rock guitar in “Beat It.”

His established stardom helped get his African-American face onto MTV, breaking what seemed like a color line, in what was a hugely beneficial step for both. Mr. Jackson wasn’t just an old-school show-business expert who could sing and dance onstage in real time; he was also more than ready for the music-video era, turning his songs into high-concept video clips that fit the chorus-line production of old Hollywood musicals into television-sized nuggets. 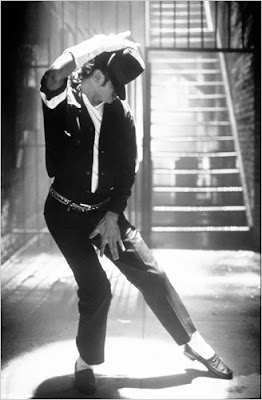 In November 1991, Mr. Jackson performed in his video "Black or White," his first release from his "Dangerous" album.
Photo: Associated Press

His dance moves were angular and twitchy, hinting at digital stops and starts rather than analog fluidity — except, of course, for his famous moonwalk, the image of someone striding gracefully without ever leaving center stage.

The world-beating success of “Thriller” was Mr. Jackson’s triumph and burden. He had the sales, the Grammy Awards, the screaming audiences in every country he toured. And he would spend the rest of his career trying to repeat the experience working many of the same maneuvers into his music: another duet, another rock guitar, another ratcheting dance track. Mr. Jackson never stopped being catchy, but behind the sheen some of the songs grew darker and stranger, like “Smooth Criminal,” with its intimations of violence, on the 1987 album “Bad.”

Mr. Jackson labored; his albums came four, five, six years apart. The hip-hop era had arrived, with its bluntly candid lyrics and quick-and-dirty productions, both contrary to Mr. Jackson’s style; he tried to keep up the crossover with raps from the Notorious B.I.G., but that didn’t buy him street credibility.

The songs grew increasingly divided between benevolent messages like “Heal the World” and spiteful ones like “Why You Wanna Trip on Me” on his 1991 album “Dangerous.” On his 1995 album “HIStory” — which started out as a greatest-hits collection but added a second album of new songs — Mr. Jackson’s fury boiled over in new songs like “They Don’t Care About Us” and “Tabloid Junkie.”

Part of the pop audience — and critics, too — took pleasure in Mr. Jackson’s setbacks. He had long been billing himself as the King of Pop, and the cover of “HIStory” shows him as a giant statue, the kind that gets toppled when tin-pot dictators (or pop idols) are overthrown.

The underlying sweetness that had made Mr. Jackson endearing, even at his strangest, had curdled, and he couldn’t resuscitate it for his final album, “Invincible,” in 2001. All the pieces he had put together, all the paradoxes that he had been able to resolve with sheer musicality, started to fall apart. He was working on a stadium spectacle for shows in London this summer, and we will never know if all his skill and showmanship could have given him a new start.
Posted by jtf at 10:24 PM

Inaccurate. Did you do ANY research before writing this essay? Sony/Epic (specifically Tommy Mottola) pulled all promotion from the Invincible project when MJ let him know that he was planning to leave Sony. Invincible STILL managed to sell 12 million records primarily by word of mouth. Hardly a disappointment in the grand scheme of things.

And on top of that, the O2 tour sold out in like, 2 seconds. It's laughable that you would even attempt to diminish the impact of someone whose contribution to the world is so self-evident.

I sense that you may not even realize you're doing that. It could be an act of sub-conscious racism. Thank goodness the rest of the world is "post-racial" enough to acknowledge a great thing when they see it.