By George F. Will
The Washington Post
http://www.washingtonpost.com/
Sunday, June 21, 2009 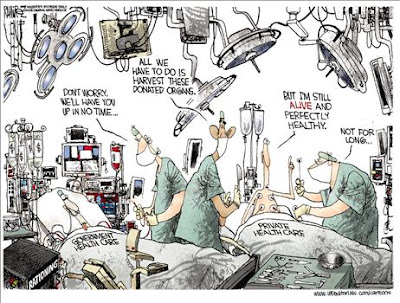 To dissect today's health-care debate, the crux of which concerns a "public option," use the mind's equivalent of a surgeon's scalpel, Occam's razor, a principle of intellectual parsimony: In solving a puzzle, start with the simplest explanatory theory.

The puzzle is: Why does the president, who says that were America "starting from scratch" he would favor a "single-payer" -- government-run -- system, insist that health-care reform include a government insurance plan that competes with private insurers? The simplest answer is that such a plan will lead to a single-payer system.

Conservatives say that a government program will have the intended consequence of crowding private insurers out of the market, encouraging employers to stop providing coverage and luring employees from private insurance to the cheaper government option.

The Lewin Group estimates that 70 percent of the 172 million persons privately covered might be drawn, or pushed, to the government plan. A significant portion of the children who have enrolled in the State Children's Health Insurance Program since eligibility requirements were relaxed in February had private insurance.

The president characteristically denies that he is doing what he is doing -- putting the nation on a path to an outcome he considers desirable -- just as he denies any intention of running General Motors. Nevertheless, the unifying constant of his domestic policies -- their connecting thread -- is that they advance the Democrats' dependency agenda. The party of government aims to make Americans more equal by making them equally dependent on government for more and more things.

Arguments for the public option are too feeble to seem ingenuous. The president says competition from a government plan is necessary to keep private insurers "honest." Presumably, being "honest" means not colluding to set prices, and evidently he thinks that, absent competition from government, there will not be a competitive market for insurance. This ignores two facts:

There are 1,300 competing providers of health insurance. And Roll Call's Morton Kondracke notes that the 2003 Medicare prescription drug entitlement, relying on competition among private insurers, enjoys 87 percent approval partly because competition has made premiums less expensive than had been projected. The program's estimated cost from 2007 to 2016 has been reduced 43 percent.

Some advocates of a public option say health coverage is so complex that consumers will be befuddled by choices. But consumers of many complicated products, from auto insurance to computers, have navigated the competition among providers, who have increased quality while lowering prices.

Although 70 percent of insured Americans rate their health-care arrangements good or excellent, radical reform of health care is supposedly necessary because there are 45.7 million uninsured. That number is, however, a "snapshot" of a nation in which more than 20 million working Americans change jobs every year. Many of them are briefly uninsured between jobs. If all the uninsured were assembled for a group photograph, and six months later the then-uninsured were assembled for another photograph, about half the people in the photos would be different.

Almost 39 percent of the uninsured are in five states -- Florida, Texas, New Mexico, Arizona and California, all of which are entry points for immigrants. About 21 percent -- 9.7 million -- of the uninsured are not citizens. As many as 14 million are eligible for existing government programs -- Medicare, Medicaid, SCHIP, veterans' benefits, etc. -- but have not enrolled. And 9.1 million have household incomes of at least $75,000 and could purchase insurance. Those last two cohorts are more than half of the 45.7 million.

Insuring the perhaps 20 million persons who are protractedly uninsured because they cannot afford insurance is conceptually simple: Give them money -- (refundable) tax credits or debit cards (which have replaced food stamps) loaded with a particular value. This would produce people who are more empowered than dependent. Unfortunately, advocates of a government option consider that a defect. Which is why the simple idea of the dependency agenda cuts like a razor through the complexities of this debate.

georgewill@washpost.com
Posted by jtf at 9:26 AM

Email ThisBlogThis!Share to TwitterShare to FacebookShare to Pinterest
Labels: George Will, Health Care

It’s official. America and the World are now in a GLOBAL PANDEMIC. A World EPIDEMIC with potential catastrophic consequences for ALL of the American people. The first PANDEMIC in 41 years. And WE THE PEOPLE OF THE UNITED STATES will have to face this PANDEMIC with the 37th worst quality of healthcare in the developed World.

Progressive democrats and others should stand firm in their demand for a robust public option for all Americans, with all of the minimum requirements progressive democrats demanded. If congress can not pass a robust public option with at least 51 votes and all robust minimum requirements, congress should immediately move to scrap healthcare reform and demand that President Obama declare a state of NATIONAL HEALTHCARE EMERGENCY! Seizing and replacing all PRIVATE FOR PROFIT health insurance plans with the immediate implementation of National Healthcare for all Americans under the provisions of HR676 (A Single-payer National Healthcare Plan For All).

Coverage can begin immediately through our current medicare system. With immediate expansion through recruitment of displaced workers from the canceled private sector insurance industry. Funding can also begin immediately by substitution of payroll deductions for private insurance plans with payroll deductions for the national healthcare plan. This is what the vast majority of the American people want. And this is what all objective experts unanimously agree would be the best, and most cost effective for the American people and our economy.

In Mexico on average people who received medical care for A-H1N1 (Swine Flu) with in 3 days survived. People who did not receive medical care until 7 days or more died. This has been the same results in the US. But 50 million Americans don’t even have any healthcare coverage. And at least 200 million of you with insurance could not get in to see your private insurance plans doctors in 2 or 3 days, even if your life depended on it. WHICH IT DOES!

Contact congress and your representatives NOW! AND SPREAD THE WORD!