On one side you have all the instruments of repression in Iran, gathering their forces for a crackdown. On the other you have unarmed protesters symbolized by the image of Neda Agha Soltan, a martyred woman dying helplessly on the street, whose last words reportedly were: "It burned me." 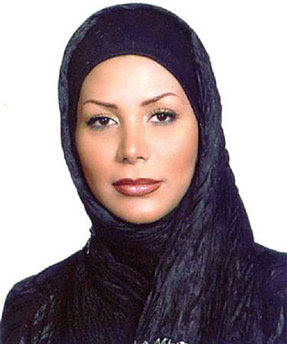 A woman identified on Flickr as Neda Agha-Soltan is seen in an undated headshot uploaded to the site on June 22, 2009.
REUTERS/Flickr

Who's going to win? In the short run, the victors may be the thugs who claim to rule in the name of God: the Revolutionary Guard Corps, the Basij militia and the other tools of an Islamic revolution that has decayed and hardened into mere authoritarianism. They have shown they are willing to kill enough of their compatriots to contain this first wave of change.

But over the coming months and years, my money is on the followers of the martyred Neda. They have exposed the weakness of the clerical regime in a way that Iran's foreign adversaries -- America, Israel, Saudi Arabia -- never could. They have opened a fundamental split in the regime. The rulers will try to bind this wound with force, and salve it with concessions, but neither approach will make the wound heal.

We are watching the first innings of what will be a long game in Iran. President Obama has recognized that with his gradually escalating rhetoric. Yesterday, he was using powerful language to describe the "timeless dignity" of the protesters and the "heartbreaking" images of Neda. He suggested that the mullahs cannot win a war of repression against their own people. "In 2009, no iron fist is strong enough to shut off the world from bearing witness to peaceful protests," he said.

Behind Obama's cool but confident talk is a judgment that, as one senior White House official puts it, the mullahs "can't put the genie back in the bottle." The official explained: "Iran will never be the same again. You don't have to know how this will end to know that. The regime has been challenged. They are now back on their heels."

A weakened Iran may seek the validation and legitimacy that would come from negotiations with the United States, presenting a diplomatic dilemma for Obama. Several American officials have told me that before the June 12 election, Tehran signaled Washington that it was ready for talks. Obama has tried to keep this door open, stressing at his news conference yesterday: "We have provided a path whereby Iran can reach out to the international community, engage and become part of international norms." But as long as the Basijs are clubbing and shooting protesters in the streets, negotiation will be a nonstarter.

As the mullahs' grip on power weakens, there are new opportunities to peel away some of their allies. The United States is moving quickly to normalize relations with Syria, and there's talk of working with the Saudis to draw elements of the radical Palestinian group Hamas away from its Iranian patrons, toward a coalition government that would be prepared to negotiate with Israel. Observes a White House official: "Iran's allies in the region have to be wondering, 'Why should we hitch our wagon to their starship?' " 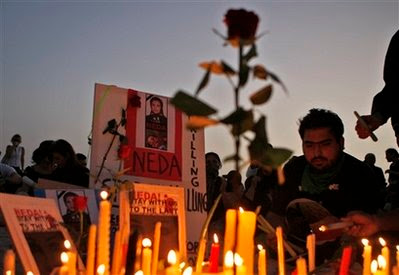 Iranians light candles in front the image of Neda Agha Soltan, who was reportedly killed when hit by a bullet during a protest in Tehran two days ago, in Dubai, United Arab Emirates, Monday, June 22, 2009. Hundreds of supporters of reformist presidential candidate Mir Hossein Mousavi attended a silent rally today.
(AP Photo/Kamran Jebreili)

The White House views the internal situation in Iran now as "a power play," in the words of one official. Supreme Leader Ali Khamenei and President Mahmoud Ahmadinejad have staged what amounts to a pro-regime coup. The Revolutionary Guard Corps is in the vanguard. There's talk that Ahmadinejad may appoint a fierce hard-liner, Ruhollah Hosseinian, as his new minister of intelligence. This hard-line group reminds me of Saddam Hussein's henchmen in Iraq.

But the opposition has tough leaders, too, with deep roots in the 1979 revolution. Mir Hossein Mousavi, the defeated presidential candidate, is no starry-eyed democrat. As prime minister, he supervised the Department of Investigations and Studies, which ran some Iranian operations in Lebanon in the early 1980s. Mousavi followers may move in coming weeks from street demonstrations to strikes and other economic protests. And behind the scenes is former president Ali Akbar Hashemi Rafsanjani, who has been dickering over the past week to build a coalition of mullahs for a collective leadership to replace Khamenei.

How will the conflict proceed? Jack Goldstone, a professor at George Mason University who studies revolutions, sees a three-stage process that leads to regime change. First, members of the elite defect and form an opposition; then the nation polarizes and coalitions are formed; and then the mass mobilization. These three elements of the revolutionary process are already present. The ferment will ripen as the regime tries to avert step four -- its demise.

The writer is co-host of PostGlobal, an online discussion of international issues. His e-mail address is davidignatius@washpost.com.
Posted by jtf at 7:33 AM