By George F. Will
The Washington Post
http://www.washingtonpost.com/
Thursday, June 25, 2009

The Spanish professor is puzzled. Why, Gabriel Calzada wonders, is the U.S. president recommending that America emulate the Spanish model for creating "green jobs" in "alternative energy" even though Spain's unemployment rate is 18.1 percent -- more than double the European Union average -- partly because of spending on such jobs?

Calzada, 36, an economics professor at Universidad Rey Juan Carlos, has produced a report that, if true, is inconvenient for the Obama administration's green agenda, and for some budget assumptions that are dependent upon it. 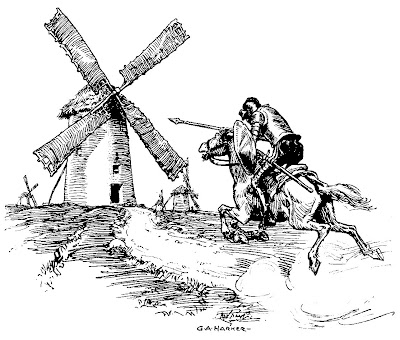 Calzada says Spain's torrential spending -- no other nation has so aggressively supported production of electricity from renewable sources -- on wind farms and other forms of alternative energy has indeed created jobs. But Calzada's report concludes that they often are temporary and have received $752,000 to $800,000 each in subsidies -- wind industry jobs cost even more, $1.4 million each. And each new job entails the loss of 2.2 other jobs that are either lost or not created in other industries because of the political allocation -- sub-optimum in terms of economic efficiency -- of capital. (European media regularly report "eco-corruption" leaving a "footprint of sleaze" -- gaming the subsidy systems, profiteering from land sales for wind farms, etc.) Calzada says the creation of jobs in alternative energy has subtracted about 110,000 jobs elsewhere in Spain's economy.

The president's press secretary, Robert Gibbs, was asked about the report's contention that the political diversion of capital into green jobs has cost Spain jobs. The White House transcript contained this exchange:

Gibbs: "It seems weird that we're importing wind turbine parts from Spain in order to build -- to meet renewable energy demand here if that were even remotely the case."

Questioner: "Is that a suggestion that his study is simply flat wrong?"

Actually, what is weird is this idea: A sobering report about Spain's experience must be false because otherwise the behavior of some American importers, seeking to cash in on the U.S. government's promotion of wind power, might be participating in an economically unproductive project.

It is true that Calzada has come to conclusions that he, as a libertarian, finds ideologically congenial. And his study was supported by a like-minded U.S. think tank (the Institute for Energy Research, for which this columnist has given a paid speech). Still, it is notable that, rather than try to refute his report, many Spanish critics have impugned his patriotism because he faulted something for which Spain has been praised by Obama and others.

Judge for yourself: Calzada's report can be read at http://tinyurl.com/d7z9ye. And at http://tinyurl.com/ccoa5s you can find similar conclusions in "Yellow Light on Green Jobs," a report by Republican Sen. Kit Bond, ranking member of the Environment and Public Works Committee's subcommittee on green jobs and the new economy.

What matters most, however, is not that reports such as Calzada's and the Republicans' are right in every particular. It is, however, hardly counterintuitive that politically driven investments are economically counterproductive. Indeed, environmentalists with the courage of their convictions should argue that the point of such investments is to subordinate market rationality to the higher agenda of planetary salvation.

Still, one can be agnostic about both reports while being dismayed by the frequency with which such findings are ignored simply because they question policies that are so invested with righteousness that methodical economic reasoning about their costs and benefits seems unimportant. When the president speaks of "new green energy economies" creating "countless well-paying jobs," perhaps they really are countless, meaning incapable of being counted.

For fervent believers in governments' abilities to control the climate and in the urgent need for them to do so, believing is seeing: They see, through their ideological lenses, governments' green spending as always paying for itself. This is a free-lunch faith comparable to that of those few conservatives who believe that tax cuts always completely pay for themselves by stimulating compensating revenue from economic growth.

Windmills are iconic in the land of Don Quixote, whose tilting at them became emblematic of comic futility. Spain's new windmills are neither amusing nor emblematic of policies America should emulate. The cheerful and evidently unshakable confidence in such magical solutions to postulated problems is yet another manifestation -- Republicans are not immune: No Child Left Behind decrees that by 2014 all American students will be proficient in math and reading -- of what the late senator Pat Moynihan called "the leakage of reality from American life."

georgewill@washpost.com
Posted by jtf at 6:35 AM