You always have a dog in the fight, whether you know it or not. 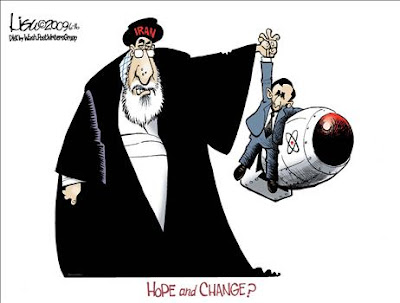 The polite explanation for Barack Obama’s diffidence on Iran is that he doesn’t want to give the mullahs the excuse to say the Great Satan is meddling in Tehran’s affairs. So the president’s official position is that he’s modestly encouraged by the regime’s supposed interest in investigating some of the allegations of fraud. Also, he’s heartened to hear that OJ is looking for the real killers. “You've seen in Iran,” explained President Obama, “some initial reaction from the Supreme Leader that indicates he understands the Iranian people have deep concerns about the election .”

“Supreme Leader”? I thought that was official house style for Barack Obama at Newsweek and MSNBC. But no. It’s also the title held by Ayatollah Khamenei for the last couple of decades. If it sounds odd from the lips of an American president, that’s because none has ever been as deferential in observing the Islamic republic’s dictatorial protocol. Like President Obama’s deep, ostentatious bow to the king of Saudi Arabia, it signals a fresh start in our relations with the Muslim world, “mutually respectful” and unilaterally fawning.

And how did it go down? At Friday prayers in Tehran, Ayotollah Khamenei attacked “dirty Zionists” and “bad British radio” (presumably a reference to the BBC’s Farsi news service rather than the non-stop Herman’s Hermits marathon on Supergold Oldies FM). “The most evil of them all is the British government,” added the supreme leader, warming to his theme. The crowd, including President Ahmadinelandslide and his cabinet, chanted, “Death to the U.K.”Her Majesty’s Government brought this on themselves by allowing their shoot-from-the-lip prime minister to issue saber-rattling threats like: “The regime must address the serious questions which have been asked about the conduct of the Iranian elections.”

Fortunately, President Obama was far more judicious. And in return, instead of denouncing him as “evil” and deploring the quality of his radio programming, Ayatollah Khamenei said Obama’s “agents” had been behind the protests: “They started to cause riots in the street, they caused destruction, they burnt houses.” But that wasn’t all the Great Satin did. “What is the worst thing to me in all this,” sighed the supreme leader, “are comments made in the name of human rights and freedom and liberty by American officials . . . What? Are you serious? Do you know what human rights are?”

And then he got into specifics: “During the time of the Democrats, the time of Clinton, 80 people were burned alive in Waco. Now you are talking about human rights?”

It’s unclear whether the “Death to the U.K.” chanters switched at this point to “Democrats lied, people fried.” But you get the gist. The President of the United States can make nice to His Hunkalicious Munificence the Supremely Supreme Leader of Leaders (Peace Be Upon Him) all he wants, but it isn’t going to be reciprocated.

There’s a very basic lesson here: For great powers, studied neutrality isn’t an option. Even if you’re genuinely neutral. In the early nineties, the attitude of much of the west to the disintegrating Yugoslavia was summed up in the brute dismissal of James Baker that America didn’t have a dog in this fight. Fair enough. But over in the Balkans junkyard the various mangy old pooches saw it rather differently. And so did the Muslim world, which regarded British and European “neutrality” as a form of complicity in mass murder. As Osama bin Laden put it:

How come a catalogue of imperial interventions wound up with that bit of scrupulous non-imperial non-intervention? Because great-power “even-handedness” will invariably be received as a form of one-handedness by the time its effects are felt on the other side of the world. Western “even-handedness” on Bosnia was the biggest single factor in the radicalization of European Muslims. They swarmed to the Balkans to support their coreligionists and ran into a bunch of Wahhabi imams moving into the neighborhood with lots of Saudi money and anxious to fill their Rolodex with useful contacts in the west. Among the alumni of that conflict was the hitherto impeccably assimilated English public (ie, private) schoolboy and London School of Economics student who went on to behead the Wall Street Journal’s Daniel Pearl. You always have a dog in the fight, whether you know it or not.

For the Obama administration, this presents a particular challenge — because the president’s preferred rhetorical tic is to stake out the two sides and present himself as a dispassionate, disinterested soul of moderation: “There are those who would argue . . . ” on the one hand, whereas “there are those who insist . . . ” on the other, whereas he is beyond such petty dogmatic positions. That was pretty much his shtick on abortion at Notre Dame. Of course, such studied moderation is usually a crock: Obama is an abortion absolutist, supporting partial-birth infanticide, and even laws that prevent any baby so inconsiderate as to survive the abortion from receiving medical treatment.

So in his recent speech in Cairo he applied the same technique. Among his many unique qualities, the 44th president is the first to give the impression that the job is beneath him — that he is too big and too gifted to be confined to the humdrum interests of one nation state. As my former National Review colleague David Frum put it, the Obama address offered “the amazing spectacle of an American president taking an equidistant position between the country he leads and its detractors and enemies.”

What would you make of that “equidistance” if you were back in the palace watching it on CNN International? Maybe you’d know that, on domestic policy, Obama uses the veneer of disinterested arbiter as a feint. Or maybe you’d just figure that no serious world leader can ever be neutral on vital issues. So you’d start combing the speech for what lies underneath the usual Obama straw men — and women: “I reject the view of some in the West that a woman who chooses to cover her hair is somehow less equal.” Very brave of you, I’m sure. But what about the Muslim women who choose not to cover themselves and wind up as the victims of honor killings in Germany and Scandinavia and Toronto and Dallas? Ah, but that would have required real courage, not audience flattery masquerading as such.

And so, when the analysts had finished combing the speech, they would have concluded that the meta-message of his “equidistance” was a prostration before “stability” — an acceptance of the region’s worst pathologies as a permanent feature of life.

The mullahs stole this election on a grander scale than ever before primarily for reasons of internal security and regional strategy. But Obama’s speech told them that, in the “post-American world,” they could do so with impunity. Blaming his “agents” for the protests is merely a bonus: Offered the world’s biggest carrot, Khamenei took it and used it as a stick.

He won’t be the last to read Obama this way.