“Human beings often don't think before they act,” laments PETA while explaining their reaction to President Obama's unthinking fly "execution." "We believe that people, where they can be compassionate, should be, for all animals.”

Close on the heels of their consciousness-raising campaign for fly compassion, PETA has launched a vegetarian campaign using Che Guevara's 24 year old granddaughter, Lydia, dolled up in commie beret and topless, though strategically covered by twin bandoliers of carrots. “Join the Vegetarian Revolution!” reads the campaign's slogan which will debut in Argentina (no less!, where lamb is considered a vegetable) this fall, then goes international. 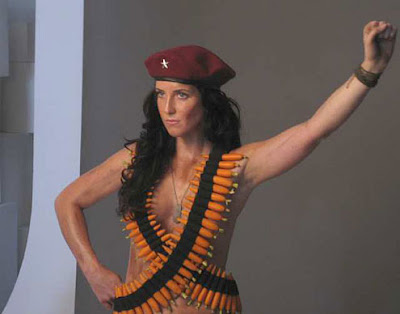 Lydia Guevara poses on the set of her PETA photo shoot. (AP)

“Revolution runs in my blood,” chirped Lydia in a recent interview with Spain'sEl Mundo. “I will never soil the great things achieved by my grandfather.”

“It's a homage of sorts to her grandfather,” explains PETA publicity chief, Michael McGraw about their ad.

Swatting a fly involves "a lack of thinking," according to PETA. But paying homage to a Stalinist mass-murderer who craved “millions of atomic victims for the victory of socialism!” and reveled in shattering the skulls of teen-aged boys convulsed in death throes, apparently involves ratiocination of the highest order. Lydia Guevara's attire and raised fist, a tribute to the totalitarian movement that killed more people in the 20th century than the Black Death killed in the 14th , apparently also shows topnotch cerebral acuity by PETA .

For the sake of this report let's overlook the mass-murder of humans, which doesn't seem to trouble PETA. Animal rightists, however, might be interested in Lydia's grandad's treatment of puppies. After all, by their own admission, this PETA ad campaign is "a homage" to Che.

"Kill the dog, Felix, But don't shoot him--strangle him," writes Che in his diaries about an incident during the Anti-Batista skirmishing in Cuba's hills. "Very slowly Felix pulled out his rope, made a noose and wrapped it around the little animals neck--then he started tightening," writes Che.

"When Felix had picked him up, the puppy's tail had been wagging happily. Naturally, as was the usual case with these men, the puppy had expected the usual petting and caresses. Now Felix grimaced as he tightened the noose on the agonized puppy. "That happy wagging of the tail turned convulsive," writes Che. "Finally the puppy let out a smothered little yelp. It seemed a long time till the end finally came," recounts Che. "Finally after one little spasm the puppy lay still, his little head resting over a branch."

For some reason Che saw fit to describe such stuff in loving details.

More worrisome for PETA, they should be aware that the regime Lydia's granddad co-founded is in hot-water with animal rightists for their enslavement and torture of dolphins.

"Cuba has become the world's leading exporter of live dolphins for "dolphinariums" and other controversial "swim-with-dolphin" tourist projects," reported the latin american news agency Noticias Aliadas back in August 2003.

"Newly captured Atlantic bottlenosed dolphins bring $40,000 to $70,000 on the international market, though park owners recoup that investment quickly by charging tourists up to $150 to swim with and touch the popular creatures...According to media reports, a key figure in Cuba's dolphin trade is Celia Guevara, the 39-year-old daughter of the famous revolutionary. Havana's National Aquarium, where Guevara is chief marine mammal veterinarian, recently provided six dolphins to Dolphin Fantaseas....The dolphins' conditions at that park were recently investigated by Whale and Dolphin Conservation Society chief executive Niki Entrup, and are now the subject of protests orchestrated by Toronto activist Gwen McKenna and the German Dolphin Conservation Society."

In the interest of the objectivity that characterizes my writing, I'll point out that not that all dogs within Che's Cuban circles were brutalized. In fact one was pampered shamelessly. This dog belonged to Herman Marks, one of Che Guevara's very, very few trusted friends in Cuba. Marks was a U.S. ex-convict, Marine-deserter, rapist and mental-case, who at age 30 was convicted of raping a teenage girl and sent to the state prison in Waupun, Wisconsin for 3 1/2 years. Then he slipped into Cuba and joined Che's band of rebels, whereupon his zeal as executioner saw him catapulted to captain in short order.

“In La Cabana, Marks would bring his pet dog to work with him,” recalls former political prisoner, Robert Martin Perez, who suffered 28 years in Castro's Gulag. "A huge dog that looked like a German shepherd/ hound cross of some kind. He followed Marks everywhere."

PETA and Lydia might get a tingle up their leg to learn how Cuban blackbirds also benefited from Lydia's granddad's policies."Those firing squads had been going off daily since January 7, 1959, the day Che Guevara entered Havana,” recalls former political prisoner Hiram Gonzalez. “ It didn't take long for the birds to catch on. Flocks of them had learned to perch atop the wall that surrounded La Cabana Fortress and in the nearby trees. The firing squad volleys became their dinner bell. After each volley they swooped down to peck at the bits of bone, blood and flesh that littered the ground. Those birds sure grew fat."

- Mr. Fontova is the author of Fidel: Hollywood's Favorite Tyrant
Posted by jtf at 7:58 AM