Those Medieval Monks Could Draw

When you think of medieval art, drawing may not spring instantly to mind.
Medieval ivories and enamels? Definitely. Medieval sculpture, metalwork and stained glass? Sure.

Of course medieval artists — many of whom were anonymous monks working as scribes in scriptoria — drew. All those manuscript illuminations had to start somewhere. But did they actually make drawings that survived and were cherished as drawings, or that filled practical needs that only drawing can? 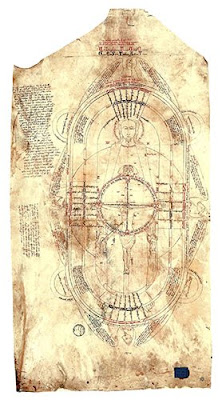 Pen and Parchment: Drawing in the Middle Ages at the Met includes this Crucifixion by Opicinus de Canistris from the mid-1300s.

To most of us, European drawing before the Renaissance and its emphasis on individual genius and the artist’s hand is a dark, uncharted void. Which may explain why “Pen and Parchment: Drawing in the Middle Ages” at the Metropolitan Museum of Art feels so startlingly full of light. You may even find yourself rubbing your eyes and blinking.

The 50 little-seen works on view span nearly five centuries and reveal medieval drawing to be vital, evolving, remarkably diverse and essential to the medium’s Renaissance blossoming. The medieval period is often compared with its successor and found lacking. And the superficial clumsiness in some of these works may initially ratchet up your awe for the Renaissance and for the radical changes wrought by its embrace of antiquity and its obsession with the human body and linear perspective.

But with a little time at this show the gap starts to shrink. The skills of medieval artists dovetailed with their otherworldly goals: the bodies that interested them most were heavenly. But, as this exhibition demonstrates, realism was not beyond their reach.

The material on hand ranges from accidental drawings — that is, unfinished illuminations that inspired a new emphasis on line — to exquisite efforts like a breathtaking ink rendering of a facade of Strasbourg Cathedral from around 1260. Many of them crossed the Atlantic Ocean for the first time to be here. Adding to their freshness, almost all come from university or monastic libraries rather than museums. 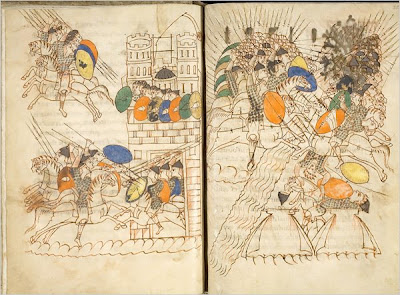 In an 11th-century French codex, the Maccabees pursue their retreating foe across the gutter of a two-page spread as over adjacent hills. Line dominates, especially satisfying in its account of the lunging horses and contrasting body language of victors and vanquished.

Organized by Melanie Holcomb, an associate curator, and Elizabeth Williams, a research assistant, both in the Met’s department of medieval art, the show comes with an excellent catalog that brings together a pithy introductory essay by Ms. Holcomb and lengthy entries by Ms. Williams and a dozen other curators and scholars. That number alone suggests both the broad scope of the works on view and the rarity of the occasion.

In the first gallery an assortment of illuminated manuscripts — psalters, gospels, epistles and a Bible or two — trace the liberation of drawing from its subservient role in richly colored illuminated texts. Hand-drawn line gradually assumes a life of its own, uncoiling from elaborate initials, existing on equal terms with color and abandoning carefully framed settings to exploit white parchment pages and the physical facts of the book as object.

In an 11th-century French codex, the Maccabees pursue their retreating foe across the gutter of a two-page spread as over adjacent hills. Shields are painted orange and green; chain mail is indicated with tiny circles in ink on wash; otherwise line dominates, especially satisfying in its account of the lunging horses and contrasting body language of victors and vanquished.
Occasionally lines do all the work, as in a sinuous ink image from the late ninth century of St. Paul lecturing an agitated crowd of Jews and gentiles, rendered by a Swiss monk with a special talent for depicting hair. (Tonsures never looked so good, and Paul’s beard ends in curling droplets of ink.) The image is part of a copy of the Pauline Epistles lent by the Monastery of St. Gall, having been made on the premises.

But luxury of material and execution were generally considered the Christian way, and this led to lavish minglings of colored line, solid or thinly washed color and gold leaf that reached its height among Anglo-Saxon draftsmen. In a Gospel from Canterbury around 1000, St. Matthew, seated by a lectern, is shown in robes that consist entirely of swirling lines of blue, green and red ink. His immediate background is a deep red wash surrounded by a more densely colored architecture; the book on which he works has gold-leaf pages. 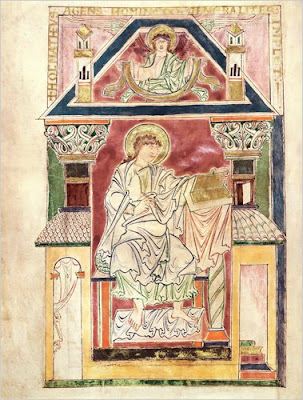 Lavish minglings of colored line and gold leaf reached its height among Anglo-Saxon draftsmen. In a Gospel from Canterbury around 1000, St. Matthew is shown in robes that consist entirely of swirling lines of blue, green and red ink; the book on which he works has gold-leaf pages.

Equally striking, and much nuttier, is an image of the evangelist John from the Corbie Gospels (French, 11th century). Both his robe and the columns flanking him are white parchment streaked with red, for an alluring candy-cane effect.

Antiquity makes it presence felt in an illustrated copy of the plays of the Roman playwright Terence made in St. Albans, England, in the 12th century. Here a wonderful portrait of Terence in a carved frame held by two masked attendants is joined, on the facing page, by additional theater masks displayed in a grand set of shelves. Classical motifs and details mix freely with medieval ones in plain ink and wash, which were considered appropriate for pre-Christian themes.

In the second gallery, drawing expands to provide knowledge itself with an infinitely flexible linear framework and to serve, as perhaps no other medium can, as a form of conjecture or speculation. In an array of charts, diagrams and maps, scholars both secular and ecclesiastic tried to organize received knowledge or depict the structure of the cosmos itself. A learned manuscript from a Benedictine monastery in 12th-century Germany tackles the human anatomy, tracing five systems of the body in separate images. The same monastery produced a copy of the “Etymologies” of Isidore of Seville in which a red-ink chart measures degrees of kinship with an elaborate pyramid of male and female faces. Bracketed top and bottom by the head and feet of Jesus, the totality has the bluntness of a drawing by Louise Bourgeois.

In contrast a drawing from Salzburg from about 1150-60 is all suave realism in its portrayal of Philosophy as a queenly figure adored by puttilike beings symbolizing the seven liberal arts. It has a naturalness and grace equal to that of many Renaissance Madonnas or Baroque portraits. Across the way a very long scroll presents a history of the world based on the genealogy of Jesus.

But there are also drawings that focus on specific events, like the charming “Privilegium Imperatoris,” a land-granting charter issued by Alfonso VII, king of Castile and León in 12th-century Spain, and lent by the Hispanic Society of America. The main players line up along the bottom of the sheet, as if posing for a photograph. Nearby a Limoges cloisonné plaque, displayed facing the wall, suggests the preciousness of parchment; on its copper back, an artist practicing his drawing skills has incised a human head — small, sharp and very much alive.

In the third and final gallery the devout anonymity of the medieval artist begins to erode. A 13th-century English artist named Matthew Paris is represented by large close-up portraits of the Madonna and Child and two images of the adult Jesus that probably record paintings he saw. And not to be missed are three drawings by Opicinus de Canistris (1296 to about 1354), an Italian cleric trained in the arts of illumination and cartography. 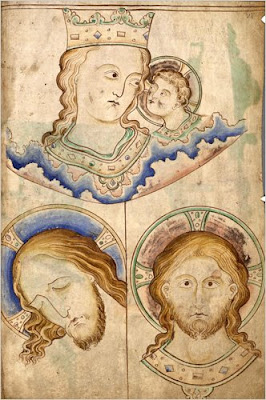 A 13th-century English artist named Matthew Paris is represented by large close-up portraits of the Madonna and Child and two images of the adult Christ that probably record paintings he saw.

Two of these works are tall, double-sided sheets of parchment on which Opicinus erected fantastic traceries of layered images and diagrams. They were among works rediscovered in the 1920s that Opicinus made in the 1330s after a strokelike illness. His aim was to express a new relationship between the earthly and spiritual church, and this comes across most spectacularly in an image of a haloed man whose robe and body encompass a scene of the Crucifixion. Looking at this extraordinary composition, you may rub your eyes and blink yet one more time.