'Republicans have attempted to lead with one eye on the rear-view mirror, gazing at the fading reflection of Ronald Reagan. . . . But Ronald Reagan cannot win the victory for Republicans in [the next election], and the party had best get busy finding fresh ideas and new leaders.” Ralph Reed wrote those words after the Republicans lost the election — the election of 1998. 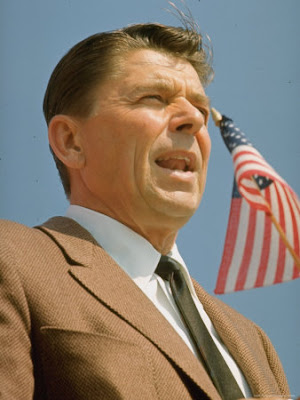 Since then, Reagan’s reflection has faded still more. Yet the tendency Reed lamented has only gotten stronger. Reagan’s death, the reevaluation of his presidency by historians (including liberal historians), and, above all, the political failure of George W. Bush have made conservatives cling to Reagan’s memory more fiercely. In 2008, during the first presidential-primary campaign since Reagan died, each of the Republican candidates presented himself as his reincarnation. After Republicans lost the election, conservative activist Phyllis Schlafly offered familiar advice: “Republicans should follow Ronald Reagan’s example.” Conservative congressman Patrick McHenry is running a PAC that seeks “to return the Republican party to its Ronald Reagan roots.” The Heritage Foundation’s website seeks to resolve today’s policy debates by asking, “What would Reagan do?”

Much of the debate over the Republican party’s future concerns Reagan. Should the party return to Reaganism, as the “traditionalists” argue, or move beyond it, as the “reformers” say? At a recent party gathering, Jeb Bush was reported to have thrown in his lot with the reformers and urged the party to let go of Reagan’s memory. (There are conflicting accounts of what Bush said.) Several conservatives who had previously been fans of the former Florida governor attacked him lustily and in public for the alleged slight.

Nostalgia is the more serious charge. Conservatives may be looking for a presidential candidate to present himself as “the next Reagan” — the Republican field in 2008 certainly thought so — but the public at large is not. It has, after all, been more than 20 years since Reagan held office. The country has changed, and many observers say that his agenda and even his political vision are now obsolete. “I love Reagan too,” Republican strategist Mike Murphy recently wrote in Time. “But demographics no longer do.”

Liberals may disdain what they call the “cult of Reagan,” but Republicans’ affection and respect for the man who won the Cold War seems a lot less cultish than their own infatuation with President Obama. Reagan was the most consequential president of the last 35 years, the most successful Republican president of the last century, and the president most associated with the conservative movement. Of course conservatives should try to learn from his example.

If, that is, they can decide which Reagan to learn from. There are quite a few on offer. There is the sunny, irenic Reagan. At a reception following the unveiling of a statue of Reagan in the Capitol, RNC chairman Michael Steele said, “You never heard a harsh word come out of his mouth.” (What about the “evil empire” and “welfare queens”?) There is the libertarian Reagan: Former congressman and media personality Joe Scarborough recently complained that Republicans had gone astray by forgetting the maxim, which he attributed to Reagan, that the government is best that governs least. (This was right after Scarborough complained that Republicans had gone too far in deregulating Wall Street.) The liberals’ Reagan, meanwhile, is defined less by his principles than by the compromises he made to them: less by the large tax cuts he won than by the smaller tax increases he accepted.

The conservatives who summon Reagan’s ghost for use in today’s arguments usually use him as a stand-in for doctrinal purity. He illustrates the alleged axiom that true-blue conservatism — these days we would probably have to say true-red — wins elections. His leadership of his party was bookended by moderate-Republican failure. Presidents Nixon and Ford brought their party so low that in their aftermath it considered changing its name. The elder President Bush wasn’t just a one-termer; his vote in successive elections dropped more than that of any president since Hoover (another moderate Republican, as historically minded conservatives will inform you). Many conservatives draw the lesson that the GOP is better-off without its non-Reaganite politicians, now dubbed RINOs, for “Republicans in name only.”

Such Republicans regularly put up roadblocks in President Reagan’s path, and he was frequently tart about them in his diaries. Yet he never supported primary campaigns against them. He challenged an incumbent Republican in a primary himself, of course, in 1976. But he did not support his former aide Jeffrey Bell in his 1978 primary against New Jersey senator Clifford Case. His White House even supported Jim Jeffords of Vermont. After he won the battle over the basic direction of the party, he seems to have concluded in practice that further intra-party fighting was counterproductive. He may have been on to something. It is melancholy for conservatives to contemplate that yesterday’s liberal Republican senators have been replaced far more often by liberal Democrats than by conservative Republicans.

Reagan’s practice ran counter to our superficial impressions of him in other respects, too. “It’s true hard work never killed anyone,” he famously quipped, “but I figure, why take the chance?” Reagan had his reasons for wanting his political career to seem effortless. It can be useful for a politician to be underestimated, and for his utterances to sound like pure expressions of common sense. But we now have an extensive documentary record that shows that Reagan worked extremely hard both on his policies and on his rhetoric.

As a conservative spokesman, the governor of the largest state, and then a presidential-candidate-in-waiting, Reagan had taken and defended positions on a multitude of issues. Compared with some later Republican leaders, such as the first Bush and Sen. John McCain, Reagan cared about a broader range of policies and knew more about them. He didn’t make up positions on the fly or go with his gut. He had also honed his explanations of why he sought some reforms and rejected other proposals. Steven Hayward, the second volume of whose excellent history The Age of Reagan appears this summer, points out that it took practice and attention as well as talent for Reagan to become the Great Communicator. Reagan could ramble through responses to questions and even occasionally flub his lines. But he concentrated on getting his most important messages across, and doing it succinctly.

Are Reagan’s would-be successors willing to follow this example? Bush, Dole, Bush, and McCain didn’t. None of them could talk, and some of them seemed to disdain the enterprise. One hopes that Sarah Palin is doing her homework on national policy issues behind the scenes, prepared to reemerge with an unquestioned mastery of them. In her career in national politics, she has given one fine speech, at last year’s party convention. Nothing as good has followed.

Contemporary Republican politicians might find two features of Reagan’s rhetoric instructive. The first is that when he was not appearing before movement audiences, his conservatism was rarely explicit. He did not advertise his conformity to a school of thought even when he did, in fact, conform. He did not, that is, sell his policies on the basis of their conservatism. Rather the reverse: He used attractive policies to get people to give his conservatism a look. Hayward notes that Reagan’s televised speech on behalf of Barry Goldwater’s presidential campaign was “quite ideological,” but that Reagan presented the choice before Americans as “up or down” rather than “left or right.”

The second is that the American Founding loomed large in Reagan’s rhetoric. The political scientist Andrew Busch has found that during his presidency Reagan mentioned the Founders more than his four immediate predecessors combined. He mentioned the Constitution ten times in his memoirs, compared with zero for those predecessors. Those of us who believe that our political inheritance from the Founders is what conservatives ought to be trying to conserve will naturally find this fact heartening. No serious student of Reagan can believe that his constitutionalism was other than sincere. It also served him well politically. It promoted unity among his sometimes fractious supporters. It rooted him in American tradition even as his opponents called him a radical. It provided a connective thread, a coherence, a seriousness, and even a nobility to his politics that it might otherwise have lacked.

Reagan’s constitutionalism puts him squarely in the “traditionalist” camp of today’s intra-conservative debates. Taken in full, though, his record shows how misconceived those debates are. Some of his current admirers make him out to be a supremely gifted exponent of a timeless conservative platform, as though he were merely Barry Goldwater with better public-relations skills. Yet Reagan differed in both his program and, especially, his emphases.

John O’Sullivan has written that “Reaganism was not an innovation in political thought”:

It was conservative common sense applied to the problems that had developed in the 1960s and 1970s. To the stagflation of the economy, it applied tax cuts and the monetary control of inflation; to the market-sharing cartel of OPEC, it applied price decontrol and the “magic of the marketplace”; and to the revived threat from the Soviet Union it applied a military build-up and economic competition.

These policies were what most conservatives would have recommended as answers to these problems at most times in [the 20th] century. The only novel thing about them is that they were actually carried out.

That is not quite right. Reagan was an innovator in key respects. It is true, for example, that most conservatives harbored a preference for lower spending and lower taxes. But the previous conservative orthodoxy was content to wait until some future day when spending was lowered to embark on tax cuts. Hence Goldwater voted against Kennedy’s tax reductions. Reagan redefined the conservative orthodoxy on this issue.

I quote O’Sullivan at length because he nonetheless grasps something that other admirers of Reagan have scanted: Reaganism succeeded as statecraft because it applied characteristically conservative insights to the challenges of his time. Reagan wanted to reform entitlement programs, just as Goldwater did; but he saw that the country had more pressing needs, such as for tax reduction. The tight connection between Reagan’s agenda and the nation’s circumstances tends to elude us these days — so much so that we misquote one of his signature lines. Everyone remembers that he said in his first inaugural address that “government is not the solution, government is the problem.” Everyone forgets that the line began “In this present crisis.” He wasn’t saying that government was always “the problem,” let alone that it would always be the problem in the same way that it was in 1981.

It is thus a mistake to assume that keeping true to the spirit of Reaganism requires contemporary conservatives to press forward with his administration’s program: to keep trying to reduce the top income-tax rate, for example, with the same urgency he brought to the task. A conservative today should share Reagan’s conservative preference for lower taxes and a less socially harmful tax code. But he might conclude that, in part because Reagan changed our circumstances, the tax that most needs lowering today is the payroll tax. Or he might conclude that a free-market reform of health care is more important now than any changes to the tax code.

Gov. Mitch Daniels of Indiana says that Republicans must be the party of hope, not the party of memory. Reagan managed to lead both parties simultaneously. George Will, correcting a widespread misunderstanding at the time Reagan took office, said that he did not wish to take the country back to the past: He wanted to restore the past’s way of facing the future. Conservatism must constantly adapt. Burke knew it. So did Reagan. He was simultaneously a traditionalist and a reformer. Let all conservatives be so.
Posted by jtf at 8:03 AM