Most people would agree that tearing up an illuminated manuscript to sell it by the page is vandalism. But might it also liberate the art on those pages? That’s the underlying question of “Pages of Gold,” the Morgan Library & Museum’s quietly compelling show of leaves separated from manuscripts and sold to collectors of medieval art. 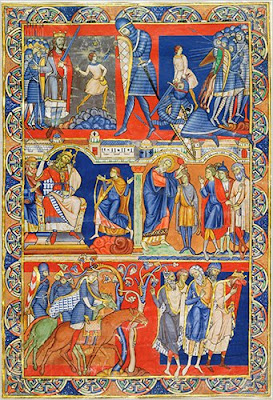 Pages of Gold: Medieval Illuminations From the Morgan Scenes from the life of David, a leaf from the Winchester Bible, at the Morgan Library & Museum

The Morgan owns a large number of these “orphan” leaves, many acquired by the museum’s founder, Pierpont Morgan, but it has never shown them as a group. With an eye to the convoluted provenances of these works, William M. Voelkle, the museum’s medieval and Renaissance manuscripts curator, has installed 50 single leaves from the collection, 12 of which are being exhibited for the first time.

Some are whole pages, but many are excised and mounted illuminations. A few are montages that combine panels from different parts of a book.

Even though they are divorced, sometimes messily, from their texts, these images have much to tell us. They were given a new life as “illuminated miniature paintings,” in the words of a 19th-century auction catalog.

The art of manuscript illumination flourished in the Middle Ages and died out with the invention of the printing press. It can take the form of decorative initials, scattered miniatures or full-page paintings. Most illuminated texts are religious in nature, usually commissioned by a monarch or wealthy donor to the church. 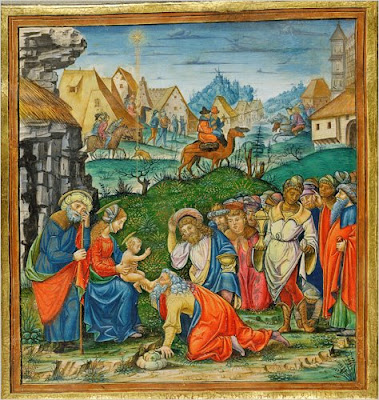 “Adoration of the Magi,” circa 1500, illuminated and signed by Master B. F.

Organized geographically, the show allows a comparison of illumination styles in England, Italy, Spain and other countries and regions. It isn’t necessary to be a medievalist to perceive that a softly modeled, jewel-tone Nativity from a Florentine gradual differs markedly from an angular, green-tinged Crucifixion from a German missal.

“Pages of Gold” also unfolds through the figures who created and participated in the market for single leaves. They include an Italian abbot, an English art historian and a mysterious artist known as the Spanish Forger. You might add Pierpont Morgan to the list, though most of the damage had been done centuries before he made his purchases.

The practice of liberating the occasional page from a manuscript goes back hundreds of years, but it became more common when medieval art started to pique collectors’ interest in the 19th century. The market can be traced to an Italian abbot turned art dealer named Luigi Celotti.

In 1798 Celotti obtained choir books that had been looted from the Sistine Chapel in the French Revolution. Aware of a growing appetite for medieval art among English collectors, he cut out the miniatures and borders from the books and took them to London, where they were sold at Christie’s in 1825. 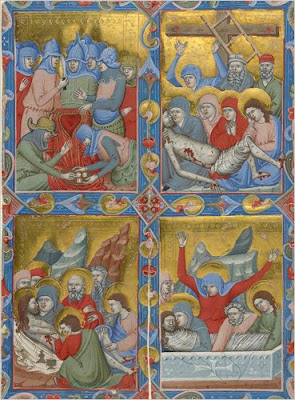 The miniatures from the Hungarian Anjou Legendary, a 14th-century manuscript depicting the lives of Christ, the Virgin and the Saints, are exceptionally graphic and physical; the artist spared no detail in rendering Jesus’s gushing wounds and the flaying of St. Bartholomew.

Celotti’s marketing strategy was partly a matter of convenience; the books were large and would have been subject to a weight-based import tax. But he also realized that the illustrations were art objects in themselves. Celotti not only mounted many of the books’ miniatures, but also cut and pasted their patterned borders into inventive montages that look very much like intact leaves.

“Pages of Gold” opens with a dazzling Celotti montage in its original gilt frame, in which a miniature of Pope Clement VII is surrounded by medallions and classical decoration taken from four other sections of the book.

The English art historian William Young Ottley, who had cataloged the 1825 Christie’s sale, picked up where Celotti left off. His own collection of single leaves, including some taken from the 12th-century Eadwine Psalter in Canterbury, was sold at Sotheby’s in 1838.

Outshining both Celotti’s montage and the Eadwine Psalter pages is a leaf from the Winchester Bible (around 1160-80), the largest English Romanesque Bible, depicting scenes from the life of David. Easily the most important single page in the Morgan’s collection (scholars refer to the artist as the Master of the Morgan Leaf), it is as dynamic as a modern-day comic book but with quietly emotive breaks in the action. In the final panel King David, mourning the death of his young son, buries his face in his red robe. 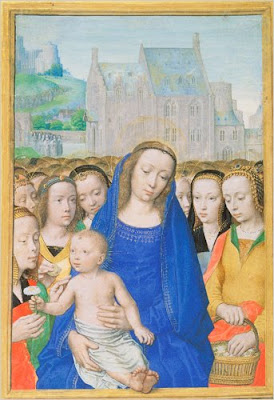 The selection of leaves from Northern Europe is smaller. At one extreme is a charming “Virgin and Child With Female Saints,” illuminated by the Flemish painter Gerard David, in which the Christ Child props his chubby feet on a trompe l’oeil frame.

In the case of eight pages from the Hungarian Anjou Legendary, a 14th-century manuscript depicting the lives of Christ, the Virgin and the Saints, surgery was needed to restore the narrative flow. Each page has four scenes that were separated when the manuscript’s 17th-century owner cut out the miniatures and pasted them into a small devotional album.

After Pierpont Morgan bought the album, the miniatures were removed and reunited. They are exceptionally graphic and physical; the artist spared no detail in rendering Jesus’ gushing wounds and the flaying of St. Bartholomew.

The selection of leaves from Northern Europe is smaller. At one extreme is a charming “Virgin and Child With Female Saints,” illuminated by the Flemish painter Gerard David, in which the Christ Child props his chubby feet on a trompe l’oeil frame. At the other is a Crucifixion in a rocky landscape by the German artist Springinklee the Elder, who was evidently inspired by Dürer.

The show ends on an unexpected note, with three impostors: leaves painted sometime in the early 20th century by the shadowy artist known as the Spanish Forger. His fakery was exposed in the late 1920s by the Morgan Library’s first director, Belle da Costa Greene. Tests led by Mr. Voelkle revealed that although the Forger painted on genuine medieval vellum or parchment, he used a type of pigment that wasn’t available before 1814. 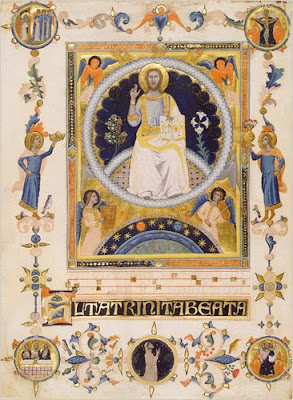 “Christ in Majesty,” a leaf from a Laudario, from Florence, Italy, circa 1340.

The Morgan gave the Spanish Forger his own show in 1978, and continues to celebrate his deviousness here. The curator even credits him with helping to preserve real manuscripts by flooding the market with fakes. As a wall label notes, “Unfortunately no new forger has come forward to help satisfy the demand for single leaves and cuttings, and some dealers are still shamelessly cutting up manuscripts.”

Such was the fate of two leaves from another large Spanish choir book, which the Morgan considered for acquisition in 2005. The museum contacted the dealer only to find that the leaves had been sold to another buyer and were being offered, in pieces, on eBay. The starting bid for each fragment? A dollar.