Iranian leaders will always believe Anglo-Saxons are plotting against them. 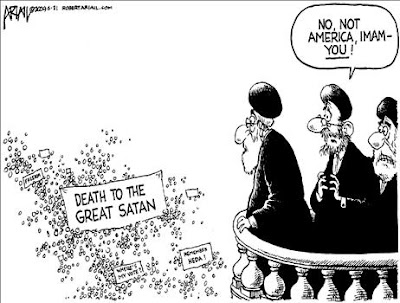 I have twice had the privilege of sitting, poorly shaved, on the floor and attending the Friday prayers that the Iranian theocracy sponsors each week on the campus of Tehran University. As everybody knows, this dreary, nasty ceremony is occasionally enlivened when the scrofulous preacher leads the crowd in a robotic chant of Marg Bar Amrika!—"Death to America!" As nobody will be surprised to learn, this is generally followed by a cry of Marg Bar Israel! And it's by no means unknown for the three-beat bleat of this two-minute hate to have yet a third version: Marg Bar Ingilis!

Some commentators noticed that as "Supreme Leader" Ali Khamenei viciously slammed the door on all possibilities of reform at last Friday's prayers, he laid his greatest emphasis on the third of these incantations. "The most evil of them all," he droned, "is the British government." But the real significance of his weird accusation has generally been missed.

One of the signs of Iran's underdevelopment is the culture of rumor and paranoia that attributes all ills to the manipulation of various demons and satans. And, of course, the long and rich history of British imperial intervention in Persia does provide some support for the notion. But you have no idea how deep is the primitive belief that it is the Anglo-Saxons—more than the CIA, more even than the Jews—who are the puppet masters of everything that happens in Iran.

The best-known and best-selling satirical novel in the Persian language is My Uncle Napoleon, by Iraj Pezeshkzad, which describes the ridiculous and eventually hateful existence of a family member who subscribes to the "Brit Plot" theory of Iranian history. The novel was published in 1973 and later made into a fabulously popular Iranian TV series. Both the printed and televised versions were promptly banned by the ayatollahs after 1979 but survive in samizdat form. Since then, one of the leading clerics of the so-called Guardian Council, Ahmad Jannati, has announced in a nationwide broadcast that the bombings in London on July 7, 2005, were the "creation" of the British government itself. I strongly recommend that you get hold of the Modern Library paperback of Pezeshkzad's novel, produced in 2006, and read it from start to finish while paying special attention to the foreword by Azar Nafisi (author of Reading Lolita in Tehran) and the afterword by the author himself, who says:

In his fantasies, the novel's central character sees the hidden hand of British imperialism behind every event that has happened in Iran until the recent past. For the first time, the people of Iran have clearly seen the absurdity of this belief, although they tend to ascribe it to others and not to themselves, and have been able to laugh at it. And this has, finally, had a salutary influence. Nowadays, in Persian, the phrase "My Uncle Napoleon" is used everywhere to indicate a belief that British plots are behind all events, and is accompanied by ridicule and laughter. ... The only section of society who attacked it was the Mullahs. ... [T]hey said I had been ordered to write the book by imperialists, and that I had done so in order to destroy the roots of religion in the people of Iran.

Fantastic as these claims may have seemed three years ago, they sound mild when compared with the ravings and gibberings that are now issued from the Khamenei pulpit. Here is a man who hasn't even heard that his favorite conspiracy theory is a long-standing joke among his own people. And these ravings and gibberings have real-world consequences of which at least three may be mentioned:

1. There is nothing at all that any Western country can do to avoid the charge of intervening in Iran's foreign affairs. The deep belief that everything—especially anything in English—is already and by definition an intervention is part of the very identity and ideology of the theocracy.

2. It is a mistake to assume that the ayatollahs, cynical and corrupt as they may be, are acting rationally. They are frequently in the grip of archaic beliefs and fears that would make a stupefied medieval European peasant seem mentally sturdy and resourceful by comparison.

3. The tendency of outside media to check the temperature of the clerics, rather than consult the writers and poets of the country, shows our own cultural backwardness in regrettably sharp relief. Anyone who had been reading Pezeshkzad and Nafisi, or talking to their students and readers in Tabriz and Esfahan and Mashad, would have been able to avoid the awful embarrassment by which everything that has occurred on the streets of Iran during recent days has come as one surprise after another to most of our uncultured "experts."

That last observation also applies to the Obama administration. Want to take a noninterventionist position? All right, then, take a noninterventionist position. This would mean not referring to Khamenei in fawning tones as the supreme leader and not calling Iran itself by the tyrannical title of "the Islamic republic." But be aware that nothing will stop the theocrats from slandering you for interfering anyway. Also try to bear in mind that one day you will have to face the young Iranian democrats who risked their all in the battle and explain to them just what you were doing when they were being beaten and gassed. (Hint: Don't make your sole reference to Iranian dictatorship an allusion to a British-organized coup in 1953; the mullahs think that it proves their main point, and this generation has more immediate enemies to confront.)

There is then the larger question of the Iranian theocracy and its continual, arrogant intervention in our affairs: its export of violence and cruelty and lies to Lebanon and Palestine and Iraq and its unashamed defiance of the United Nations, the European Union, and the International Atomic Energy Agency on the nontrivial matter of nuclear weapons. I am sure that I was as impressed as anybody by our president's decision to quote Martin Luther King—rather late in the week—on the arc of justice and the way in which it eventually bends. It was just that in a time of crisis and urgency he was citing the wrong King text (the right one is to be found in the "Letter From a Birmingham Jail"), and it was also as if he were speaking as the president of Iceland or Uruguay rather than as president of these United States. Coexistence with a nuclearized, fascistic theocracy in Iran is impossible even in the short run. The mullahs understand this with perfect clarity. Why can't we?

- Christopher Hitchens is a columnist for Vanity Fair and the author of God Is Not Great: How Religion Poisons Everything, now out in paperback.