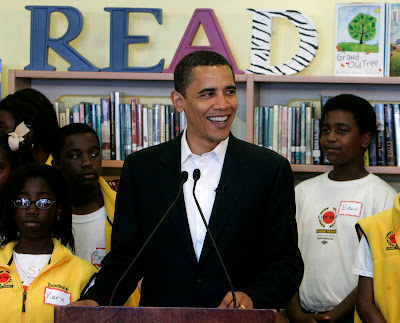 Parenting humbles any of us who try it -- even new residents of the White House.

Choosing a new puppy? Ha! The Obamas face a much tougher public relations dilemma: Are they willing to put their school-aged daughters where daddy's political promises have been?

The education world is waiting to see whether Sasha, 7, and Malia, 10, will be sent to private school while their father continues to oppose tax-supported programs that offer a similar choice to less-fortunate parents.

The question of vouchers as an alternative to public schools crosses color lines, but it is particularly appropriate for the nation's first African American president.

Black students disproportionately find themselves in under-performing schools. In fact, opinion polls by think tanks like the Joint Center for Political and Economic Studies have found black parents favor vouchers by larger majorities than white parents do.

Yet teachers unions lead opposition to such alternatives, even though studies like a 2004 Thomas B. Fordham Institute report find big city public school teachers to be more likely than the general population they serve to have their own children in private schools.

In Obama's hometown, Chicago, for example, 38.7 percent of public school teachers sent their children to private schools, the Fordham study found, compared to 22.6 percent of the general public.

In Washington, D.C., 26.8 percent of public school teachers sent their children to private schools, versus 19.8 percent of the public.

A voucher program Congress imposed on the District in 2004, which granted $7,500 a year for 1,903 students, emerged as an issue in Obama's third televised debate with Sen. John McCain.

Actually, McCain was right, inasmuch as Rhee has favored "choice," although she's lukewarm at best on the voucher issue. "I would never, as long as I am in this role, do anything to limit another parent's ability to make a choice for their child," she told the Wall Street Journal this year. "Ever."

But after the debate, a spokesman said the chancellor, along with Mayor Adrian Fenty, "disagrees with the notion that vouchers are the remedy for repairing the city's school system."

That's true. No single remedy can fix challenges as complex as those posed by public education. Every child learns differently. But Rhee's defense of "choice" offers the right direction. Any program that expands educational choices also opens opportunities for more kids who don't have enough chances to move up the ladder to a better life -- maybe even to the White House.

As a parent who reluctantly moved my own child to private school after the fifth grade, I appreciate the value of school choice. But what about the kids left behind in failing schools?

Michelle Obama offered a clue to what her family's choice will be. She flew to Washington this week (Monday, Nov. 10) ahead of her husband and toured the private Georgetown Day School. Another clue: Their daughters currently attend a private school in Chicago.

Private school also was the choice of Bill and Hillary Clinton for their daughter Chelsea. The most recent presidential child to attend a District of Columbia public school was President Jimmy Carter's daughter, Amy, in the late 1970s.

Chancellor Rhee, by contrast, is a 38-year-old single Korean-American mother with two young daughters in her troubled 46,000-student system. With the backing of Mayor Fenty, she has closed 23 schools, restructured 27 others, fired more than 250 teachers and dumped about one-third of the system's principals. Still there's more work to be done.

She recently put the critical question to a principal who was defending a teacher, according to Washington Post columnist Fred Hiatt: "Would you put your grandchild in that class?"

"If that's the standard," the principal replied, "we don't have any effective teachers in my school."

Rhee's response: "That is the standard."

Clarence Page is a Pulitzer Prize-winning syndicated columnist specializing in urban issues. He is based in Washington, D.C. E-mail: cptime@aol.com

As much as I want Obama to put his girls in the public school--because it's hypocritical not to--I don't know how they would do there. They would either be celebrities or outcasts, and the inevitable bodyguards would just make things extra awkward, underlining the difference between the "normal" kids and the daughters of the illuminati president. Private schools have more of the ability to handle such unusual children, and also the desire to facilitate their every need.